Steam Age: What to Get Your Steampunk 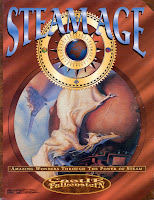 Who Worries About Encumbrance?
I love stuff- crunchy strange supplements with lots of things- gadgets, weapons, magic items. I fondly recall the many Palladium weapons books when they came out, using The Armory for Danger, International and, of course, having to spend at least a half-hour with the Q Manual before any mission could get off of the ground. The various Rolemaster Creatures & Treasures books hold a special place in my heart. In an effort to fill space they had tons of small, interesting and oddball items. Cyberpunk had the Chrome books- if you had downtime during a session, you could bury your head in that. One of my favorite supplements for Mutants & Masterminds 1e was Gimmick's Guide to Gadgets (rendered useless with the new edition two months later). I had loved such things...but not so much now.

It Took Me Longer to Build My Car Than My Character
When we play homebrews now, I go for slimmed weapon listings, general types of armor, and gadgets/equipment handled as an abstraction. I've come to realize that what I love more in such rpg supplements are the stories and plot ideas which can come from them- rather than the crunch, detail and mechanics side of things. I don't need a hundred types of pistols, each with a singular profile (Fringeworthy; GURPS High Tech; Guns! Guns! Guns!). And I've always disliked complicated systems for building or handling vehicles or equipment. GURPS Vehicles, Mekton, Champions and the like always left me cold. I wanted a simple system to handle those elements.

Steam Stuff on Demand
Castle Falkenstein offers one of the easiest of such systems. Some may argue it is too easy- with few details to differentiate between gadgets. They may have a case, but at the very least it presents a system players can pick up and grasp relatively quickly. I reviewed Castle Falkenstein in general a couple of weeks ago, and today I'm looking at one of the two "stuff" books for the system: Steam Age.

The Book Itself
Steam Age is a big catalog book of devices, people, equipment and vehicles for the CF game. It focuses on non-magical devices created with the gadget rules. It clocks in at 104 pages, softcover. My current copy comes from a later printing, as the binding and the paper work pretty well. I had an earlier edition at one time with stiffer and more warped paper, as well as a binding prone to crack. If you're familiar with early R Talsorian products, you'll know what I'm talking about. At a certain point the company switched to a slightly lighter paper weight, which made for more flexible and useful books. Steam Age has a nice color cover- though the image is borrowed from a plate in the core book. The interior's done with brown ink- which adds to the tone but slightly reduces legibility. The art's split into two parts really- Miro Salazar provides the bulk of it with images of the various "things." And there's a ton of those illustrations. On the other hand, the small cameo face images provided by Dennis Detwiller don't work as well. I say that as a huge fan of Detwiller's illustrations. Because I associate him with Call of Cthulhu and like products, his pictures here seem a little too sinister for the setting.

What Do You Get?
Steam Age divides into five sections: land-based, aeronautical, naval, and "infernal" Steam-tech plus rules additions. Each section takes its time with the material. They begin with a two-page illustration splash, plus a forward statement. Most items described are "big-ticket"- ships, tanks, dirigibles, and so on. They're more set-piece details than things players will record on their sheet, with a few exceptions. Most items get a full page. This usually includes a decent-sized illustration, description, plus the brief game stats for it. Steam Age has fifty-four items spread among those first four sections. Some of those entries include profiles of various legendary and nefarious inventors (Babbage, Robur, Nemo) as well as stats. The "infernal" section covers deadly machines and gadgets- most useful for GMs trying to come up with plots for awful Masterminds. Throughout the book, color text provides ideas for GMs and players about adding these concepts to campaigns. I enjoyed reading what's here, but...

The Problem
It feels thin. The illustrations take up a great deal of space- larger than necessary in many cases. The text design feels deliberately expansive- strangely so for some full pages of text which use something closer to 18pt. I'm more used to products like the Chromebooks or Forbidden Lore: Technology which have the same kind of material (and even more stat details) but manage to get more than one item to a page for the most part. GURPS Steam-Tech serves as a useful comparison book. It is about 25% longer, but features at least three times as many items- many of which have text equivalent to the text given to Steam Age items. Many of the G: ST items are minor, but the book feels much more complete and useful than Steam Age. The book does provide an additional look into how Steam Tech impacts New Europa, but I suspect most readers will be left wanting more.

Advice for Hosts
One bright spot comes in the last eight pages of Steam Age directed at the host. Here the book switches to a denser text. It offers suggestions for how to handle scientists and inventors both as player characters and as NPCs. There's a nice breakdown of what life is like for the inventor on the side of good and of evil. Two topics get additional special discussion: Aero-Pirates and the Babbage Engine. The former provides an interesting adversary, but one with some logistical considerations. The later considers how calculational engines are actually used in the setting. The section ends with three pages offer plot and scenario ideas for several locales around the Falkenstein world (London, Edo, etc.)

Overall
Steam Age sparks with wit and interesting ideas. It carries through the tradition of the core book in managing to blend rules, setting material and fluff text well. It is a tremendously useful book for Castle Falkenstein, but it is not the best supplement of the bunch. It really makes me wonder what a second edition of the game might have done- how an active internet fan base might have brought in new ideas and submissions to the game. I'm glad I own Steam Age, but that's as a fan of Steampunk in general and Castle Falkenstein in particular.

Portability
Given the lightness of the mechanical details given here, most of the ideas of Steam Age could easily be brought over to another game (especially something like FATE or FUDGE). Most of what you have here are story concepts. Some of these fit fairly securely into the Castle Falkenstein universe, but most would be applicable to other Steampunk games. But how useful the discussions of Ironclads and Steam Zepplins would be to other applications of the genre (Victoriana or Etherscope) is questionable. If you're looking for a general resource book for Steampunk gadgets, I'd look to GURPS Steam-Tech first.
Posted by Lowell Francis at 10:34 AM