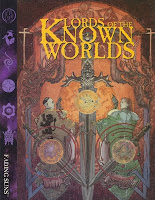 CONSIDERING THE HOUSES
In another set of posts, I talked about reconstructing Fading Suns with some of the structural elements of Legend of the Five Rings. I got to brainstorming about that a little more this weekend, and I thought I'd share that. Essentially here I'm adding families within each House, as L5R does with the clans. You'll see two examples below. These aren't necessarily as the Houses appear in Fading Suns- I've aimed for playability. So obviously YCMV (Your Campaign May Vary) in reconstructing these.

I like the idea of basing each House around a key "virtue". Along with that virtue, I've talked about how that can appear in the extreme, calling that their "folly". I also present the virtue the House least respects, their "downfall," and how that might impact. I settled on providing five families for each House, but obviously that number could be changed. You might also suggest that these are the five major families, but that others exist. I figure that each has a specialty, but that they all have general resources (such as a military, ships, lands, etc).

AL-MALIK
The smallest of the five Great Houses. They draw from a mixed culture of mysticism and practicality. They’ve made themselves key to commerce and interstellar trade throughout the Empire, often working from behind the scenes rather than in front. They have a tightly knit family, a passionate sense of self and devotion to keeping their line above the common folk. Their connections mean that they often have wonders of the lost ages at hand.

Virtue: Cleverness
There is strength in being able to outwit one’s enemies. The al-Malik embrace this as their cardinal virtue. Praise and rank within the House comes from a demonstrable ability to plan several moves ahead in any kind of competition.

Folly: Cunning
The danger with cleverness comes when it disregards all other conventions, when all things become tools or instruments to be used in one’s plans. Plots and plans for their own sake offer a dead end road for those who become too obsessed.

Downfall: Bravery
As a small house, with carefully controlled marriages and assignment of duties, the al-Malik place high value on any individual member. Throwing one’s life away wastefully brings dishonor to the house. Hence, the al-Malik prefer caution over direct action.

Families
Istakhr: The High Merchants of the House and perhaps the most powerful such family among all of the houses. They have carefully managed routes and seized control of upstart guilds over the generations, leaving them with their hands around the key intersections and industries. They’re known for being able to bring a vast number of resources to bear when negotiating. They hold leadership within the family.

Almira: Beyond conventional goods, the al-Malik recognize the importance of people and skilled tradesmen. The Almira specialize in the handling of contracts of service. These they buy and trade- moving people from one system to another as needed. In some cases, this can offer a life of opportunity and adventure. More often, it is a form of indentured servitude, or at worst slavery. "The Muster" of the Almira can lean hard on people to get them to agree to such contracts, even on unfavorable terms.

Nawar: Commonly called the Hunters of the al-Malik, this small family specializes in tracking down anything- from lost relics, to scraps of information, to escaped criminals. They maintain a discrete web of contracts across the Empire. They often have to get in and out quietly, without local intervention, a practice they have refined to an art.

Tarif: The al-Malik offer allegiance to the Church of the Pancreator, but have their own philosophies regarding it. Some within the Church view their approach with suspicion, but they are officially accepted. The Tarif practice a variety of unusual transcendental forms, some bordering on Sathraism. They have their own Theurgic techniques.

Bashshar: Artists renowned across the Empire. They both develop their own arts and also act as preservationists for the various artistic techniques, styles and forms which have come and gone across the Empire. They’re endlessly adaptable, with each member of the family learning several forms. They know how to strike at the heart of a reluctant Li Halan and the right words to bring a Decados to honest tears.

DECADOS
The House with the worst reputation, given its history of manipulation for its own goals. It has a longstanding feud with Hawkwood. Perhaps more than any other house, they are devoted to their own aims: the accumulation of knowledge and experience. Such information gained them the upper hand in the past, but they’ve never been able to capitalize on their advantages.

Virtue: Knowledge
A noble should be well-informed. The Decados believe than any and all knowledge and learning should be accumulated. Life of a Decados revolves around testing and studies of all kinds. It means that the Decados often have access to the most obscure kinds of data and histories. They look to expand their knowledge as a means of gaining face within their House.

Folly: Esoterica
The Decados drive for experience and knowledge can devolve into obsessions. They might fall into the trap of minutiae or pointless collecting. They can also paralyze themselves with over-analysis. More dangerously, they believe that all experiences should be embraces- leading many down into self-indulgence and hedonism.

Downfall: Loyalty
The greatest threat to the Decados is the Decados themselves. As a House they value autonomy and self-interest above many other virtues, especially loyalty. Learned and basked in their own particular branch of knowledge, each family feels that they should set the course or, at the very least, that they should not be responsible for the choices and consequences of the other branches of the House. While the Decados family of Decados is nominally in charge, they face and constant struggle against the other families. When meetings of the Houses occur, time has to be granted for the various Decados representatives to settle out their pecking order before moving forward.

Families
Decados: A strange mixed house, focused generally of social affairs, diplomacy and manipulation. That works in service of their mastery of salons and parties. They have managed to maintain their position of leadership purely through skills in pitting others against one another. They’re alos legendary for their skill and obsession with Think Machines of the Second Republic, a fact which makes the Church nervous about them beyond their other indulgences.

Jakovi: Legendary for their spies and intelligence gathering. This they trade for favors, services and goods throughout their House. Their skills in espionage, infiltration and information is legendary across the Empire. They have reasonably close ties with the Sharn, trading secrets for genetic manipulation.

Severus: The brutal military family of the Decados. The elite corps they field are known as the Kossaks, brutal warriors trained in a host of deadly environments. The Severus studies strategies and tactics- and practice them at the cost of lives. There are dark rumors about the kinds of simulations these warriors engage in.

Sharn: The Genetechs of the Empire. While others possess such techniques, no one have refined and implemented them to the extent of the Sharn. They practice body manipulation and modification- adding new traits and removing others. The Decados as a whole embrace these changes gladly, something which often puts off outsiders who find the changes off-putting or simple inhuman.

Galinka: Raider Archaeologists of the Decados. They know how to hit a site, break through protections, and little the most important information before an authorities can arrive. They keep a close eye on the trade in specialty goods- watching the markets for unusual objects. They’re also masters of restoration, selling off the less important pieces to fund their work.