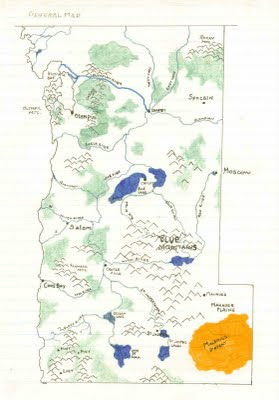 So a couple of maps I found while organizing my files. These two date from the first GURPS campaign I ran- which would have been 1986. It was the first “do anything” system so I tried to take them at their world, beginning with a post-Apocalyptic campaign which allowed me to use GURPS Autoduel, GURPS Fantasy and a fair smattering of Palladium’s After the Bomb. 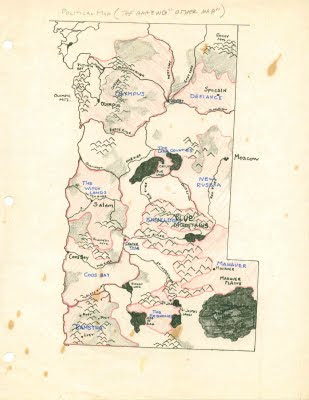 Of course you can see the age and wear on that particular version. Eventually the campaign turned into an Amber game, with the idea that the players were each competing to move through the various Shadows on their way up to seize control of the Throne. Needless to say, the game eventually fell apart. Still it is nice to see an early freehand map…for a setting me maybe played four sessions in…

Work continues off and one in my project to restructure the Fading Suns campaign setting- borrowing liberally from L5R. I’ve been sketching out some thoughts- working out how the other Houses fit into the scheme of things. I did the first two families, as a kind of test run. I think the idea has potential. One elements which I haven’t yet dealt with is the idea of the “Schools” offered by the families and Houses. That’s where the rubber hits the road in L5R- with choice of family school offering the most important abilities a character possesses. My approach right now is system-agnostic. I’m not sure what game I would use to run it. So I haven’t thought too much about those schools- they’ll likely wait until the end when I settle on a system.

I suspect that I’d use our homebrew, but what flavor I’m uncertain. Right now we have four campaigns of it in operation- all with differences in approach, some large and some small. Plus another handful of versions done for smaller or completed campaigns. Some things have worked better than others. The problem is, of course, that an ongoing campaign’s not a great test-bed for an rpg system. That’s an ironic problem. On the one hand, you have problem which come up and you want to change, but you don’t want to be constantly tweaking and fiddling with the knobs and dials of the system as you’re playing. The players have been pretty good about going with those changes, but I’m wary of unintended consequences especially if you see gaps which closing might hamstring a particular build. On the other hand, some of the problems you only pick up when you’ve played the game for a long time- usually a consequence of developing characters and leveling.

In my original discussion I thought about what L5R offered to Fading Suns. I think I also need to consider that question in the opposite direction: what does Fading Suns offer to the L5R structure. I’ve said I have a certain fondness for the “trappings” of the FS setting. One detail it offers is the reduction of borders and of travel times. In classic L5R families abut against only a handful of neighboring clans. Physical proximity makes a significant difference. A campaign set in Ryoko Owari will be dominated by the interests and presence of the Scorpion and Unicorn Clans. Other clans take a secondary position. I don’t think that’s necessarily a bad thing. But it does point at a limitation of the setting, constraints on travel. If you want to go to a destination a significant distance away, the PCs have to get permission (or have authority), make arrangements and then travel for a long time. That offers plenty of opportunities for travel, but also can fall into a rut. I’ve read a number of L5R scenarios that I didn’t use simply because of their inherent geography. They were firmly set in a particular place, making it difficult to port them. using them would require the PCs to be constantly on the move. Given that I like an NPC-heavy campaign, this also meant that most characters encountered would not pop up again unless they tagged along with the group. Fading Suns offers a solution to that problem, with generally faster travel- but still somewhat restricted (i.e. the players can’t go anywhere they want). Mind you that isn’t a unique facet of the Fading Suns setting- many sci-fi games also offer that. But it at least offers a start if I have to start providing a rationalization beyond “it sounds cool to me…”

Related to the above, I’ve been working this last week on the version of our homebrew we’re going to be using for our “Treasure Hunters” campaign. That’s based on the timeline the players created in our Microscope session. I set several tasks for myself on this:

1. Build the FATE aspects and tags mechanics into the system.

2. Prepare the card sets for each player.

3. Lay out the character sheet

5. Create a fast on-the-fly variation on the magic system

6. Create a set of general abilities players can pick from as well at the start of the campaign.

I’ve got the first three items on the list finished, and I’m a little ways into #4- I distributed a list of the roles of the players and I’m awaiting responses. I went a little overboard on item #1- the rules weigh in right now at a little over 6500 words- and that’s just an appendix to the houserules version. I’m annoyed at myself for that. But since it is just a draft and includes a lot of examples, it shouldn’t be too bad.The goal of this micro-campaign, beyond fun play, will be to see how well the FATE mechanics work with our groups style of play and the rhythm we've already established with our homebrew.

I need to make sure I break down those tasks for each day and get things done ahead of time. I’m not going to have a chance to do anything before the game as I have obligations in the afternoon before running Saturday night.

Posted by Lowell Francis at 9:13 PM