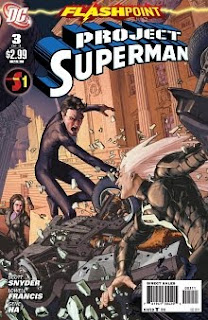 PUNCHING THE FUTURE
So Wednesday saw the publication of Flashpoint: Project Superman #3, finishing out the series I wrote. Gene and Art did an amazing job under a tight deadline. It looks great. The pages in a few places fell exactly as I hoped- pages 2 & 3 we set up will parallel panel design and they ended up being facing pages. I love the effect of that especially because you have a really strong set of visual and narrative contrasts working there as well. I enjoyed doing this book, which was a challenge. We were among the last of the tie-in series to wrap up. Next week the last book of the Flashpoint spine series comes out. That will finish out this event and lead into the new relaunched 52 DC books. The keys to why that relaunch happens are in the Flashpoint books, but the event itself stands as a whole.

Writing a Flashpoint tie-in book has been interesting. One the one hand you have a number of beats and plot details you’re required to hit. Those form a set of obstructions that you have to work with- some provided before the process and some during. There’s an interesting contrast in the idea of Flashpoint itself. Dan Didio as C2E2 said that they’d commonly gotten feedback that Elseworlds books were popular, but that readers wanted more depth and exploration of those worlds. Flashpoint tried to do that- offering a large scale alternate-world story, without pushing out the regular books going on at the time. In fact, I think the only one directly affected was Booster Gold, but I could be wrong. Doing such a large series in uncharted territory requires immense editorial coordination. It does offer a lot of room for depth, but at the same time you have to rein in the various books to make them work towards the central story. That’s an interesting "obstruction" requiring the writers to find a creative path around.

LIKE WRITING A FORGOTTEN REALMS ADVENTURE
There’s a couple of parallels to the art of building a superhero rpg campaign world. Certainly the kind of tinkering done in this kind of broad alternate universe looks a lot like what we do as GMs. The Flashpoint universe is a little unusual in that it is actually holding back its key premise: what’s the difference? What caused the change? OOH with most Elseworlds books we get that up front- the same with rpg supers settings that try to not just be another "Publisher Universe" (Underground, Brave New World, Lucha Libre Hero). The other issue’s about how much you use/integrate with a published setting. For example, how constrained do you as a GM feel about changing up the setting? It you hesitate on that, you could be subject to a host of choices and options you don’t like. If you want to buy in- and have players who buy into the setting because they know it- then that’s a hefty trade off. You’re effectively playing in someone else's sandbox. With a good group, they may be willing to follow you down that road, but I’ve seen players in the past with an attachment to the setting. Not that they would critique every little decision you make as a GM- but rather as the setting spin further away from what they saw as the core strengths of the setting, they’d become irritated.

DO SETTINGS MATTER?
In my earlier inventory of some superhero settings, I mentioned that the only one I’d actually run "as is" was Wild Cards. I do have to wonder how many gamers actually use settings, in general, and how many use superhero settings in particular? There’s a lot of material out there- but how much is really useful. I pick up setting books if they offer some interesting ideas to adapt or at the very least a cool set of bad guys. So some of the settings books I’ve bought- like Champions Universe and Paragons- really function just as an enemies book, the bestiary of the superhero world.

I'll focus on supers here for a bit, but I think the same questions can be applied to setting books in general- what are gamers getting out of those and how are they actually using them?

SETTING TYPES
I think you can break setting books and types down into three flavors: universes, premises, and specific settings. I’d say universes are what game companies try to establish for their superhero games- like META-4 for M&M, Champions Universe, Villains & Vigilantes, Golden Heroes, Superworld- all work to set a kind of big and all-encompassing world in which the stories can occur. Marvel and the DC Universe also fall into this category. They’re large- with the intent of providing a history and backstory for GMs coming in- and open enough that it excludes no story or idea. These aren’t particular useful to me and I have to wonder how useful they are to other people.

By premises I mean superhero games/sourcebooks which add an obstacle or limitation to the setting. For example, Godlike adds two- the first being the time period of the game, set in WW2 but the second being a unified "scientific" source for the powers of the supers. Other Wild Talents books do the same kind of thing- Progenitor, eCollapse, This Favored Land, Kerberos Club, GrimWar- all offer a niche superhero experience with a distinct focus. Other examples are Aberrant, Wild Cards, and Mutant City Blues. Generally I like the ideas of these, but there’s such an attraction to building one’s own super universe that I again read them for ideas to borrow.

Finally setting books in the super universe usually means city books- with these often being the cornerstone of a company setting out their universe (hence San Angelo, Emerald City, Bay City and Freedom City). Again I have to wonder how many people use superhero city sourcebooks as is. I’ve seen some interesting and distinctive ones (like Gotham and Bedlam City) but often they’ve kind of generic. I can find NPCs to borrow, but what I’d really like to see is a kind of generic sourcebooks for running city adventures for superhero games. Think of something like the great Damnation City- but for supers.

FRIENDLY NEIGHBORHOOD?
City books do lead into one of the big considerations in running a supers game: local or global? A local game offers the advantage of a steady stable of normal NPCs and the chance to get at PCs normal lives on a regular basis. PCs can also build up a solid reputation, learn the ins and outs of the criminal society, and really develop useful resources. The disadvantage to a local game is that it does require the crime to come to the players- and when looked at in the grand scale, the city might seem like an awful place to be if these kinds of things keep happening. If players do screw up, cause problems or fail dramatically they have to really live with the consequences of their choices. A global campaign, on the other hand (or even national) offers the exotic- with new places and sites to have fights all the time. It means players can team up with and meet new heroes on a consistent basis. On the other hand, global games reduces some of the classic investigation story possibilities. It also means a smaller stable of local NPCs (perhaps base staff?). The biggest question is how the PCs get from place to place in a speedy fashion- Quinjet? Magic Gates? Teleporters?

SETTING THE SETTING
So what questions does the superhero GM or publisher have to answer? Beyond the simple premise things, which hopefully make it different from other games- a few questions have to be dealt with.

Published Heroes: Will you have existing comics heroes or villains in your world?

Unified Origin? Is there one event which caused superpowers? Is it mutation, genetic, supernatural?

Magic? Is there magic? Never underestimate the impact of that decision.

Tone? A really important decision to convey to your players. Try to find solid analogs to explain what you’re aiming for.

Realism? A little different from tone- the question of how realistically you’re going to treat the idea of being a hero/vigilante (i.e. will there be a Civil War?)

Established Universe? If so, can you point to a few sourcebooks (movies, comic runs, TV shows) which set out your vision?
Posted by Lowell Francis at 4:38 PM