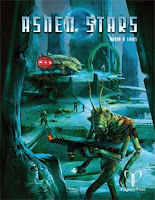 TO THE BRIDGE
Over on Diehard GameFan I have a pretty extensive review of Ashen Stars posted. Bottom line: I'm generally sold on it, with some reservations (some of my other thoughts on GUMSHOE here). I also reviewed separately the adventure collection for Ashen Stars, Dead Rock Seven. In some ways, seeing those cases written out helped me get a handle on what was going in the main game. It took me a while to understand what I liked and didn't like about Ashen Stars and what it was trying to do. Pelgrane's put out an amazing and lovely game- but it may take some work to get new players into it. Players need to have a clear handle on two elements in play. First, the alien races and their natures. They need to know who they are, what they can do, and how that might bear on cases. Some of the races have special abilities, so players need to know those- especially if the GM plans on having any or all of those races present in an investigation. Second, what exactly you can do with each of the abilities. Some are obvious, but some aren't- and a condensed summary of those would be helpful- maybe a two page cheat sheet for the first couple of sessions.

MYSTERIES VS. PROBLEMS
Ashen Stars broadens the structure of investigations. The Lasers are as much problem solvers as they are detectives. They have a secondary set of concerns- beyond figuring out whodunit. They have to enact a solution, they have to do that in a way that causes the least offense, and they have to work to enhance their reputation. The Esoterrorists had a pretty basic line- figure out who was behind an occurrence, stop it and neutralize them. Fear Itself is even narrower- solve the mystery before the mystery kills you. Mutant City Blues and Trail of Cthulhu stick closely to traditions of police procedurals and CoC adventures. But Laws recognizes that most episodic sci-fi is built on a simple structure: problem, investigation, twist and solution. Now that could apply to many genres- but think of how any of the Star Trek franchises operate, early Babylon Five, or Farscape. Character-centered and extended arc stories in space opera represent a relatively recent phenomena (BSG, late B5). Ashen Stars opens things up- it isn't Space Precinct, but instead a rich and diverse sci-fi rpg. It doesn’t necessarily have the classic sci-fi paths of rebellion, trade, exploration, or bug-hunting but what it offers is pretty exciting.

BUYING AND SELLING
That having been said- sci-fi's not something our group's gravitated to. Or rather where we've done sci-fi it has been along pretty tight lines:

1. Science Fantasy: I want to start with the one which is hardest to define. Typically when I think of science fantasy I think of John Carter, Warlord of Mars. That mix of swords & sorcery with a sci-fi backdrop. But I also think of some sci-fi rpgs as being science fantasy as well. For example, Fading Suns and Rogue Trader feel like fantasy with a thin tech veneer on them. Our group played the former and has some interest in the latter (with a number of retired WH40K players among them).

2. Established Settings: For example, Star Wars which rightly ought to fall into the Science Fantasy category above, falls here. It's probably the sci-fi setting people in our group have played most and has the most positive reception. Then there's Star Trek and Firefly, both of which have had their heyday- played in several different versions.

3. Cyberpunk: For many years, this was the go-to sci-fi game of choice. Eventually the couple of people in the group who really enjoyed it moved on to other things. I think other genres have pushed over into what would have been cyberpunk's territory. You see elements from it elsewhere- especially in transhumanist concepts. Ashen Stars notably uses the self-augmentation chrome that I associate with cyberpunk.

4. Superheroes: Depending on the setting, superheroes can be more or less sci-fi. The X-Men, for example have always been much more in touch with that than other superhero groups. Grant Morrison's run on New X-Men for example is strongly sci-fi. The same thing with J. Michael Straczynski's Supreme Power series. We've played a couple of superhero campaigns that have that approach- a singular genetic source for super-powers and the implications of that.

So not so much about classic space opera. In think part of that comes from our gaming DNA. Our groups have never been ones attracted to Traveller. I know a couple of players with some fondess for it, but they're the exception. It never caught on around here as it did elsewhere. Most players among the groups I play with strongly went down the fantasy path. Until I talked to some of them recently, I hadn't realized that some them never bought into Star Trek, for example. I'd always taken that as a geek-given: that everyone had watched ST and had some affection for it.

All of that makes Ashen Stars a tougher sell for my group. I could focus on the diversity of aliens and system spanning travel that make it feel like Star Wars. But SW suggests a certain heroism and epic scale that doesn't quite fit with my conception of Ashen Stars. Star Wars offers a literal black and white conflict, which closes out more ambiguous drama- at least as presented in core materials of the movies. On the flip side, Firefly's pretty popular and "The Bleed" of Ashen Stars does echo the "The Black" of lawless space. But Firefly has more grit and a lot less fantasy- fitting aliens, weird powers and high glint technology into that frame doesn't work. 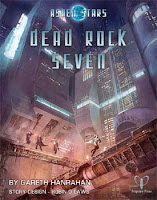 ALL GAMES ARE LOCAL
Or all of that may be my own hesitation; rationalizing it with our group's history. Space games intimidate me for a pretty specific reason- the question of scale. To actually have a space opera game, the players need to be able to move from location to location quickly. Each case should take place in a new world, with new sights and sounds. And those sights have to be rich, interesting and play into the investigation at hand. Jonathan Lethem said an interesting thing about the detective novel- that those stories are travelogues and explorations of place. That's why he used a mystery structure for his alternate universe exploration, The Yiddish Policemen's Union. [WRONG- Michael Chabon actually wrote YPMU and the point is his from the interview I heard on NPR. Error helpfully pointed out by a commenter.]

Now I'm a lazy GM- or rather I'm a GM who runs enough that my goal is to minimize prep time by maximizing utility. And I'll admit that's part of why I like singular location campaigns: cities and schools for example. The material you develop for those locations don't usually get thrown away because the players move on. These stories build layers of details- with characters and places adding to and informing other stories. And if something or someone doesn't get used, you can repurpose it elsewhere. In those games, when players go "outside" to new places, that's usually for a pretty narrow purpose and I can just worry about surface details and color, rather than having to plot out the depths of those places. I know, really, that the same thing holds true for a system-of-the-week space opera game, but it feels more intimidating. I'm enough of an obsessive and simulationist, that if I build a story with a cool planet or location, I'll probably end up spending too much time planning.

WRITING TO THE TABLE
But that won't be Robin Laws' fault. Ashen Stars has the tool's a GM needs to build things and not worry about the details. This game really cements for me what Laws does better than many other designers. He actually writes for what's getting played at the table. He writes to give gamemasters solid, interesting and quick tools to create a session. He writes for players to show them what they can do in play and how they can manipulate that. Laws offers ideas- dramatic necessity determining results (GUMSHOE, HeroQuest), all conflicts as conflict (HQ), moments as cinematic shots (Feng Shui)- that seem obvious in retrospect. He's watched how games actually play and offers systems that help that process. So in Ashen Stars he gives a planet creation system based purely on what story the GM wants to tell.

That's not to dismiss the cool of system building. I remember those complex systems well from the early days: Traveller, Space Opera, Universe. Each had chunks of rules dedicated to doing that kind of building, but that was something that appeal to me in the abstract. When I actually sat down to do it, it didn't give me the kind of thrill I know it did for other gamers. It's actually why I admire the kinds of approaches of games like Diaspora (or Microscope) where the creation is a collaborative effort. That makes that kind of more detailed process appeal to me. Not that those approaches have the crunch or scientific verisimilitude of hard sci-fi games.

LAST THOUGHT
So bottom line- I like Ashen Stars and I'm considering it for a longer campaign, with some modifications. My one practical concern comes from the number of alien races. My gut tells me that I don't want a party of mostly non-humans. I think having too many in a group potentially dilutes the impact. When I ran Star Wars, I allowed (in a party of six) up to two "alien races"- meaning non-humanoid aliens. I ended up with a droid and a wookie. I've done the same thing in fantasy games- reducing the number of non-humans there such that being one has some story impact, allows the player to own something unique. But then again, I haven't run that much sci-fi, so I don't know if I'm perhaps being too controlling- I probably need to ask other GMs.
Posted by Lowell Francis at 3:49 PM