Boot to the Head: Martial Arts Treatments in RPGs

I do love combat chrome, and I enjoy tons of options for players- at least in the abstract. When the miniature base hits the table, though, I'm not so sure. Can we have a game system with lots of options, lots of flavor and incredible speed for resolution? Here's a starter list of systems which have more detailed treatments of one colorful aspect of combat, martial arts.

1. Top Secret (1st and 2nd Editions)
I remember Top Secret, the first edition, being the first game where I saw martial arts styles named. IIRC they had a cross-reference chart for the collision of various styles and the effects. It was also the game where I learned the definition for "solar plexus".

2. Danger International
I remember Danger International having groupings of maneuvers together for martial arts. I don't recall if the first incarnation of this game, Espionage, had the same set up. We used this system for a GI Joe (comics) rpg for a while, including ninjas, of course. The elements of DI would eventually form one of the better of the early Martial Arts treatments-- Ninja Hero, which actually provided some interesting material. We used Ninja Hero for some early Wushu games, trying to handle kung-fu movies. Then at some point some of Tony Wong's Jademan comics started to be distributed in the States, like "Oriental Heroes" and "Fist of Buddha's Palm". We spent hours trying to build a set of super-martial arts styles and systems out of a mash-up of Champions and their existing MA system, but I don't think we ever did much with it. 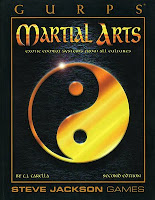 3. GURPS Martial Arts
We played a lot of GURPS up through 3e, but for some reason we never cared for the MA system they presented. It felt too mechanical to us-- or rather the mechanics got in the way of the play, requiring extra rolls and introducing a set of structures for buying martial arts that most of us never liked that much. It has been interesting to see how this has evolved over the years through several incarnations- adding more material and ideas, but becoming more and more simulationist. Not that there's anything wrong with that- I like chrome and detail- and for people who want a detail oriented system, this can be great. However, I like a little more abstraction, and a little less data management.

4. Claw Law
One of the first games that really brought an organized approach to martial arts into fantasy games. I remember the earliest editions had the same martial arts silhouettes I would see in many other games of the years. It had a core engine in the form of IIRC hard and soft martial arts, with ranks of progress and different styles have some slightly different modifiers to the system. I recall Warrior Monks becoming extremely powerful in this system-- especially with the use of the kata options which allowed them to use weapons with their martial arts. I don't recall many people using the actual style breakdowns, however.

5. Street Fighter: The Storytelling Game
I looked at this, but I never picked it up. I've heard some people speak of this game with great reverence. It was among the first to do really wild martial arts- and take that as the core rather than as a set of more outlying options. IIRC it had reference cards for the various actions and maneuvers. The combat sourcebook from the World of Darkness line, WoD: Combat, eventually adapted some of these elements in. That's an interesting book, but I'm not sure that useful within the limits of the Storyteller system and the established powers of the various monsters. 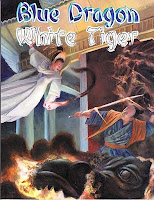 6. Blue Dragon, White Tiger
I never played the original Hong Kong Action Theatre-- but I did pick up this and their wire-fu sourcebook at one point, Swords of the Middle Kingdom. This system uses a discrete set of powers and abilities you purchase IIRC which had some power point costs. SotMK was the first time I'd seen the historic Shaw Brothers movies be given a real simulation. BD, WT is for the edition published by Guardians of Order. It is actually a dynamite book- with tons of great ideas on how to run a wuxia campaign.

7. Feng Shui
Some time after I saw HKAT, Feng Shui came out. I'd played and enjoyed the card game. I like the way FS presents heavily structured styles and with real color to them. The rest of the system I didn't care as much for, but the system presented there has some great options and ideas I'd use in other games. It appraoches combat with an interesting mix of player options and abstract mechanics to allow real narrative control of the flow. This is one of those Grail games I really want to have a chance to play someday.

8. Enter the Zombie
The All-Flesh Must Be Eaten Martial Arts sourcebook. I was really disappointed in this one. The scenarios and ideas we interesting, but the core mechanic left something to be desired. IIRC it revolved around generating chi to do any kind of effects, making it more of a set of spell or supers powers that anything like what I wanted. Even in the various Unisystem games I saw or played in, these ideas got dropped since they didn't fit with the rest of the systems. I know some people have generally criticized Unisystem for that strange imbalance, but to be fair it kind of evolved into a more general system in pieces. 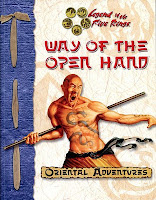 9. Legend of the Five Rings
Here martial arts was presented more abstractly, but by the time we got to The Way of Shinsei they'd added in kiho powers. It didn't treat martial arts per se particularly well- except for some new schools in Way of the Crane and Way of the Dragon. The kiho powers for monks were interesting- various different kinds of channeled powers which could create effects. In retrospect, it isn't that far off from from Enter the Zombie did, but I'm not sure why it worked better for me here. I can say whether the martial arts presented here worked in the context of the L5R system. When I ran L5R I did whole scale adaptations of the material over to Rolemaster the first time (my mistake) and then classic Storyteller. It was pointed out to me that Way of the Open Hand later tried to create a more limited and realistic approach to martial arts, but that was in L5R 2e which mashed together d20 and the standard system.

10. Oriental Adventures
I guess we could talk about Oriental Adventures in two different ways- with the first being the classic AD&D version. But that didn't deal with martial arts in depth- instead things were attached to class bonuses and benefits. The latter OA was the d20 adaptation to L5R. At least it would end up getting developed through the Rokugan supplement. Here we began to see feats given some more organization in order to create martial arts styles and forms. As this adaptation would evolve later books would give more options on this. That "pack of feats" approach would be used by a number of d20 systems for MA's. I picked up this because it related to L5R more than anything else, but I'll admit to not being a d20 person, so I can't judge the coolness or relative success of how it does it. There's a whole branch of d20 feat-pack approaches to martial arts, like Martial Arts Mayhem. I believe Spycraft 2.0 also has a set of structured trees with feats for martial arts styles.

11. Exalted
Another system that uses discrete powers in the form of martial arts charms to simulate effects. I guess I mean that as distinct from the approach of using maneuvers (ala Ninja Hero or GURPS). I've run quite a bit of Exalted 1e, but the martial arts doesn't feel all that different from the rest of the charm powers. Still it does provide a high-flying set of abilities to allow people to do more wushu style stuff. It also gives distinct styles with their own appearance and dramatic flair. I like some of the supplements which have come out expanding those ideas.

12. Weapons of the Gods
Probably my favorite game where the actual mechanics of the system seem beyond what I'm willing to get into. It has great, highly distinctive martial arts-- each form provided a history and a set of visual characteristics. I love so much about this game but it is really hard to read through and get a sense of what is going on. They have an example single combat download on the Eos Press site and just reading through it completely lost me- if a single combat takes that much back and forth and different rolls, I can't even imagine what a larger scale fight would look like. I'm at that point in my game mastering where I want cool things to happen in combat, but at the same time I don't want a fight to take more than an hour of table play. The WotG Companion provides nice rules for developing your own styles, which is a great toolkit for anyone trying to homebrew a martial arts system. Apparently this is going to be revised and republished with a more generic setting.

There's a lot more, but I'll leave this list as a starter for consideration.
Posted by Lowell Francis at 2:01 PM