So a few observations going into November. First, Robot Zero Tuesday will be back next week with new material. Second, as I head towards the end of the year, I hope to hit my milestone post right at the end. I have a couple of players & friends who have generously offered to do guest posts, so I hope to have a couple of those pop up before 2011 runs out. Third, I'd planned on posting something substantive every day in October, since I wasn't going to be doing a review each day. I came close- ending up with 29 posts. I consider that a victory given that the primary hard drive on my computer died and I lost...well nearly a decade worth of work and notes. I'm still trying to find a solution, but I've set that aside for the moment so I don't make myself crazy.

Towards the end of the year, I'll be putting together an overview of the campaigns, where they stand, where they've been in the last year, and where I see them going. But I'll mention a couple of things that have recently happened in a couple of the games:

*In both the Libri Vidicos and the Pavis High Fantasy games, the players have developed approaches I didn't see coming. Now I expect some of that- you can't predict everything the group will do, but an experienced GM will usually have a range in mind and what the group does will often overlap with that. In Libri Vidicos, the players managed to bring back the apparently dead Headmaster Gravast Direlond, in a pretty epic scene I'd been building towards for the last year and a half. But in some ways that's one of the few things I foresaw and planned for that the PCs have done. They've been cutting deep into the meta-plot and things are, as they say, “getting real.” In the Pavis game, they crossed a bad guy, who killed one of their NPCs. I expected them to deal with that- work around to taking him out and changing up the political situation in the city. Instead, they called on the last favor owed them by a god, and asked to be teleported into the bad guys lair. And then they went to town on the bad guy and his minions. Boom, boom, boom. I might have described it as overkill, but the players saw it as just-right-kill.

*In the Changeling the Lost campaign, I took advantage of a major quest arc wrapping up to make changes to the mechanics of the game. I'm hopeful about that. Essentially, I wanted to add the aspect and tags system from FATE to the game since it had worked well in a couple of the other versions of our house rules. We'll see how that plays out- this last session the group essentially changed the rule sof the game literally and figuratively in the campaign's freehold: establishing their own Court and subverting some agents of the enemy into joining them. Now they have to go and present themselves to the Princes of the city and then go and finish off the Draconic servants of a Keeper.

*In the "Treasure Hunters" campaign, we had a long, long session. I'd say most of our weekend games end by midnight at the latest. Our Thursday and Sunday games end by 11pm at the latest. There's some calculation on the players part, especially regarding elements which refresh from session to session (such as abilities and drama points). On Saturday, the group continued their invasion of the Ninja Fortress. I'd intended the adventure to take one session, but the previous session had been delayed by two players arriving late from a horse-riding accident. So we pressed on- and I watched the players spend their points. It got later- mostly based on bad pacing on my part, but I was determined to wrap the adventure that night, so we started the big epic battle at 11pm. The group faced four times their number in enemies, including seven named and significant adversaries. We wrapped up at 1:30am after a pretty awesome battle. I like doing that every once in a while and it did mean the players had already tapped some of their resources.

Lastly, I wanted to point to an interesting article I found recently. It had apparently been out there in the game blog community for a number of years, but I'd missed it. Five Geek Social Fallacies hits home pretty hard- because I've seen that go on and I've engaged in that apologist behavior over the years. I've been thinking about that recently, because we've seen some 'at table' social bullying: getting angry, threatening, and so on. It bothered me when one player I respect told another that they'd just have to 'give in' to make everything fine. The problem I have is that approach privileges one player over another, and rewards and reinforces bad behavior.

Finally, which I'm guessing comes after lastly, I'd like to point out this miniature: 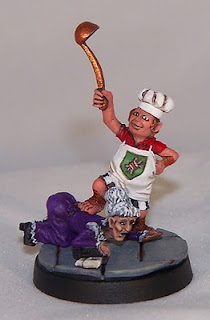 And this post. I used to play with Tom Anders, M:tG mostly. I found him to be one of the most excellent, generous and personable gamers I've ever known. He is a genuinely good person who shows immense enthusiasm for the games he plays. He's been instrumental in the Blood Bowl (tm) community, as I understand it. And when I say instrumental, I'm completely underselling his role and impact. And of course, because it was a Games Workshop product...well, if you're a gamer you can probably finish that story yourself. Anyway, I'm incredibly pleased to see Tom receiving such a nice gesture.

Posted by Lowell Francis at 1:52 PM