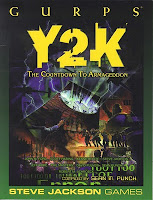 There's nothing like throwing your players into the deep end- with events, cataclysms, and disasters beyond their control. These can take many shapes or forms, as a way to open a campaign, a major game changer, or the climax of a story arc. Some disasters are natural (earthquakes, floods), some are man-made (network collapses, tailored viruses) and some are otherworldly (alien invasion, return of the Demiurge). This list collects together a number of sourcebooks offering those scenarios for play.

These could be the starter for a post-apocalypse campaign, but that genre usually covers a recovering world. In those, the disasters happened some time before the campaign start. Society's in the process of rebuilding or recovering from the disaster. Hence I've left off games like Aftermath!, The Day After Ragnarok and Earthdawn.

Please feel free to suggest other games in which the group finds themselves caught up in an immediate disaster.

1. All Flesh Must Be Eaten
Disaster: Zombies
In some ways, the Zombie disaster campaign's the most typical and common. Players find themselves in a strange new world falling apart around them and try to stay safe. However, in many cases there's no respite from that disaster- it keeps going and going. There's a big difference between the weekend horror of Shawn of the Dead and the uncertain future of The Walking Dead or even the Romero series.

AFMBE stands for me as the game that best exemplifies the zombie genre, although several other games have tried to offer alternatives. The sheer number of disaster genre variations, as well as the various forms of what a "zombie" means makes these supplements fresh.

2. GURPS Y2K
Disaster: Infrastructure Collapse (among others)
A book like this can't help but seem dated, but SJG did an admirable job trying to provide a GURPS Disaster sourcebook. This book both a look at the Millennial Panic as well as the methodologies of survivalists. It covers all kinds of worldwide cataclysms. Perhaps they can relabel and release it for the more modern 2012 "end of the world" panic.

3. When the Sky Falls
Disaster: Meteor Strike
Part of the short "event" series from Malhavoc Press. This one covers a number of variations on the idea of a magical meteor strike in a fantasy setting. While it offers many options, the primarily arc of the book covers a magical impact with fallout in the form of new magics, new monsters, and new items. It covers a lot of ground in a small space. It is too bad they didn't do more than a few of these event books. 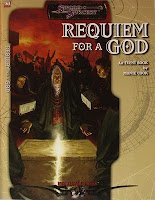 4. Requiem For a God
Disaster: Death of a God
Another Malhavoc event book, this one considers the impact of the death of a god (naturally or unnaturally) on a fantasy civilization. This book considers all of the ramifications of such a disaster from the loss of clerical power, to the withering of that god's array, to the struggle for power in such a vacuum. The book mixes up a consideration of the short term and long-term effects of such an event.

5. Time of Judgment
Disaster: Take Your Pick
The World of Darkness wrapped up with a capstone series of books intended to offer an "end game" to the campaign lines. Gehenna, Apocalypse, Ascension and Time of Judgement offered some very different takes on how the world ends for these creatures, some with a bang and some with a whimper. White Wolf did a good job of not only offering approaches tied into the metaplot of the setting, but options for those who hadn't really told those stories. The scenarios vary in quality and not all of them offer "disasters," but there's enough of them, including the rising of the Antediluvian Kindred to make it worth listing.

6. Wrath of the Immortals
Disaster: Gods' War and Comet-strike
If memory serves correctly, this is the module that moved the classic D&D setting Mystara (aka The Known World) from that system up into a new and revised version under AD&D. So the gazetteer module of GAZ1: The Grand Duchy of Karameikos got redone as Karameikos: Kingdom of Adventure. The module has the players interacting with the plots that lead to the fall of a comet on the magical kingdom of Glantri, and the wars between the various empires. I remember it for the cataclysm it added and the disaster it made of an interesting setting.

7. Crash Course Manual
Disaster: System Collapse
I've never actually read this module or the Paranoia supplements of this era, but I know some people loved it and others really disliked it. I do like the idea of dealing with the immediate aftermath of the collapse of the computer, though perhaps it would be better dealt with in a more serious campaign (as we saw a little bit later in the Fallout video game series). Still the idea of injecting a further disaster into the chaos of this world could be overdoing it or might be just what the players of an extensive Paranoia* campaign might need. 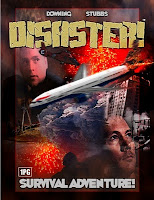 8. Disaster!
Disasters: Every One from the Movies
This is why I love going through RPG Geek, you find things like this- an rpg dedicated to simulating every cheesey disaster movie (though not all at once). How can you not love something like that? It is short, but it has the look of an extensive game.

9. Villainy Amok
Disaster: Alien Invasion/Fires
This Champions sourcebook ought to be on the shelf of every supers GM. Each chapter takes on a particular topic and offers tons of ideas for how to play them out at the table. Two included offer different options for two classic disasters: the alien invasion and the grand burning building. You get buffet of choices for presenting those, although from a supers perspective. The earlier module Invasions: Target Earth also presented a number of generic approaches to making that a campaign arc.

10. The Apocalypse Machine
Disaster: The Old Ones Return
This book offers two different approaches- one which has the players dealing with the immediate events of the disaster and the second with the players trying to pick up the pieces afterwards. This series actually begins with The Dead White World, but I love the title of this one. That's a tough and awful kind of disaster to put the players in the middle of- with the significant question of whether they can scrape together any kind of victory at all.
Posted by Lowell Francis at 11:35 PM