KEEP REACHING FOR THE STARS?
I just finished about 6500 words on Ashen Stars and its accompanying adventure collection Dead Rock Seven. I hope those will be up next week. I had a strange experience in reading through those rules. I'd pre-ordered them and gotten the nice autographed full-color version. I really enjoy some parts of GUMSHOE and I've reviewed a great deal of the line. My first reaction on reading Ashen Stars, though, was more than a little negative. It felt complicated and overwhelming. It wasn't until I sat down for a serious read that I began to see what Laws & co. aimed at- a distinctive sci-fi game of investigation in the broadest sense with all the possible trappings of the genre. That's a flip from Mutant City Blues which presented superhero mysteries with a heavily defined and limited setting. MCB doesn't simulate superheroes, nor even the comics from which it borrows (TopTen and Gotham Central). Instead, to make mysteries of a particular kind playable it establishes some strict ground rules: all powers from a single source, a precise and mapped order of those powers, and players as police officers with powers investigating those heightened crimes. In some ways, MCB's really the first sci-fi approach for GUMSHOE, but a far cry from the space opera of Ashen Stars.

LOOKING FOR CRACKS
Now I'll admit I love some elements of GUMSHOE. I've heard people dismiss the concept of not rolling for investigation as obvious or simplistic. And yes, perhaps groups had already been working with that mechanic. But GUMSHOE uses that as a starting point. It isn't that you don't roll when investigating, but that the system and mechanics support and promote an interesting and involved investigation. Players have access to other kinds of clues, make choices about where to spend resources in following leads, and gain trust in their GM that the mystery will play out and they have the competency to investigate it. Laws & co offer more ideas about running, planning and even winging mystery games than just about any other resource out there. And they show how that emphasis can be built into the fiber of the game.

On the flip side, I don't like how GUMSHOE handles risk and tension, at least for the kinds of games I want to run. To set this up, I need to give a nod to Ryan Macklin's couple of blog articles on Dice and Risk (here and here). GUMSHOE came out of investigative horror- and in the case of Fear Itself, out of a game where you'd probably be running incompetent characters. For that a system with wonky ranges and the requirement to spend before rolling makes perfect sense. I've run a lot of stripped down Unisystem horror one-shots. That system also pretty much says "You've got a skill rating, that's great...I'm still going to screw you over..." That's perfect for games of limited life-spans and bloody deaths. Dread's probably the best example of this. The only control you might have is desperately arguing that something on your character sheet questionnaire should allow you to skip a pull. But if you're using GUMSHOE for something other than horror, it becomes frustrating. I know that might sound a little backwards- after all you get to spend points and therefore have control over the roll. But you don't have any real sense of expertise, you have a die with an absolute range of 1-6 and so it is very easy to waste a spend. 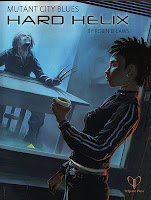 I say this based on play experience with an espionage skin of the system; a Victoriana version of The Esoterrorists; and Mutant City Blues. There's a strange split in the feeling of personal competency between one side of the mechanics and the other. The response was pretty universal across those groups. I suspect that's the nature of the games our groups have been playing for the last couple of decades- certainly we're move to greater player and narrative control systems. I don't want to harp on these problems too much- GUMSHOE offers so much good stuff for use with that system or adaptable over to other games and mechanics. I'm excited by the idea of a Pathfinder conversion (Lorefinder) in particular because I want to know what Pelgrane sees as the key elements of the system. I'm also excited by the news that Will Hindmarch and Fred Hicks will be putting together a hack. I can't imagine that they're just going to adapt it to FATE rules. Not that that wouldn't be a great thing- it would be an amazing thing (and something that skalchemist gave me advice about).

HAND ME MY TOOLBOX
Which finally brings me to whatever point I have in this post. I want to see Pelgrane put together a GUMSHOE companion. This would be a general book, useful to players across the games in the line and for general GMs of mysteries...maybe, I don't know exactly. I know there's an The Esoterror Fact Book, but what I want to see is something broader. There's a real strength in that Pelgrane has approached each of these games as solid and individual rpgs. They have rich settings- which means that the game presented isn't really a toolkit. I'd like to see something that focuses more on those bits and bolts.

So what do I want to see?

1. Guidelines and ideas for adapting GUMSHOE over into other systems. I think it is great that they're doing a stand-alone product for their PF hack, but perhaps we could have some ideas about conversions for other systems and approaches- perhaps one's that likely won't be worth their own book. For example nWoD, L5R or ORE?

2. Optional systems for handling general abilities. A couple of different flavors of this could be presented. Perhaps one which ditches spends and another which keeps spends but offers more control and choice. Along with that more articulation to the combat system, perhaps? I say that as a person who runs rules-light games. I think options to add more emphasis to that side of the game wouldn't be a bad thing.

3. Revisiting and talking generally about some of the interesting options presented in the later books- like the shop/organization system from Bookhounds of London; stability from Trail of Cthulhu; and character arcs & vessel combat from Ashen Stars.

4. Consolidating and picking out the best GUMSHOE articles Robin Laws and others have presented in See Page XX.

5. Retooling the Quade Diagram to change the organization of powers and perhaps add a few more. My friend Gene Ha in particular has been tinkering with another way to arrange this chart.

6. Another variation on the Quade Diagram- using it for a fantasy setting. In this world spells and schools of magic have particular signatures depending on how they're used. What mages can do starts tightly grouped together at low levels and then radiates outward. For this setting, I imagine the PCs as town guards. So they'd be trying to solve crimes while at the same time dealing with keeping adventurers from burning the city to the ground. I imagine some ideas from Witless Minion! could fit in with that.

7. Discussion of how to handle particular historical genres. You could get an expert on Ancient Rome rpgs like (Chad Bowser) to write up what the ability sets, law enforcement and structures would look like for that period. Any historical period which has been well covered in modern mystery fiction (Feudal Japan, Medieval England) could be treated.

8. Parallel to that- a discussion of how to handle different mystery fiction themes and genres in games. Ideas like corruption, betrayal, unreliable narrators, existential or surreal mysteries could be examined for tabletop play.

9. How to run a game aimed at younger players- with Nancy Drew or Veronica Mars style adventures. Ideas for integrating school life into such games. Perhaps with more rules for relationship mapping as a technique and source of investigation.

10. Running a detective agency- with mechanics for dealing with money, expenses and clients.

11. Building a mystery city- how to excavate and create mysteries which carry on the feeling of a place. How the players can help with that or have more power in the process (as in The Kaiin Players Guide). There are some interesting city books out there that consider the mystery flavor of places (The Naked City and Nameless Streets for example.

12. Further discussion and ideas on how to run improvised mysteries using GUMSHOE.

That's off the top of my head- I have a few other things I'd like to see, but in part I'm waiting to see what Ken Hite's Night's Black Agents (supernatural espionage) and Will Hindmarch and Jeff Tidball's Eternal Lies (post apocalypse) will bring to the table.
Posted by Lowell Francis at 3:15 PM