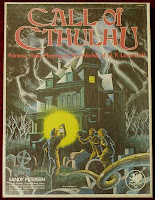 Call of Cthulhu 7th is on the horizon- a game and system which has had many editions, but remains roughly the same game. CoC has to remain interesting in a time with many competing horror rpgs, including brethren Lovecraftian rpgs like Trail of Cthulhu, Cthulhutech, and Realms of Cthulhu.

Call of Cthulhu kicked off horror gaming as a standalone genre. You could point to Tegel Manor as the first real haunted house product (maybe), but it doesn't put the horror elements at the center, and still focuses on the dungeon crawl. For this list I'm going to focus on products lines offering a full horror rpg. I'll subsume some interesting sub-products under their main entry (if they're produced by the same company). Some things, like S.H.A.D.O.W. over Scotland, offer a horror diversion or twist on the main system, but don't rise to the level of sourcebook or core rules.

I'm sure I've left something off, feel free to add a line I missed (if published up through 1990). I've arranged these in chronological order by year.

Robin Laws' suggests that CoC's notable for also being the first rpg to really emulate a literary genre. Sure we'd had fantasy games, but those wore the genre trappings rather than trying to act out a specific story form. History as setting, always vulnerable PCs, dangerous magic= CoC brought all of this to the table. It introduced Sanity as a mechanism, offering an abstract system representing non-physical damage- inflicting consequences and disadvantages. Many modern mechanics owe a debt to that.

It is worth noting that Chaosium introduced two "sub-lines" for Call of Cthulhu in this period. The first was Cthulhu by Gaslight in 1986, one of the earliest Victorian games. The second was Cthulhu Now in 1987 which tried to bring a modern spin on the ideas.

2. Bureau 13: Stalking the Night Fantastic (1983)
Tri-Tac produces some of my favorite rpgs that gamers have never heard of (this, Fringeworthy, FTL: 2448). Again I first saw this game through my sister's purchase- she'd picked up a copy a con. I loved reading through it because it took the horror with a strong dose of humor. It remained a game about monsters, the occult, and the supernatural but it also added some sly in-jokes. The Evil Dead might be a good reference point.

It was also very old-school with rolled characteristics and highly detailed combat mechanics. Tri-Tac systems have always had some eccentricities. These include firearm rules with bullet types, damage versus different armors, and hydrostatic shock, among other factors. The hit location system broke the body essentially down into one inch sections. Each had a damage line representing muscle, bones, blood vessels. You could track fractures, bleeding, bruises...

Stalking the Night Fantastic would eventually shift to be called Bureau 13, go through several editions and add even more humor (complete with a Foglio cover). It was the first horror game to suggest a federal agency of clearinghouse for dealing with the supernatural and strange (anticipating The X-Files...).

3. Chill: Adventures Into The Unknown (1984)
I'll honestly say that two things kept me away from Chill when it came out: the goofiness of other Pacesetter publications and the Holloway cover. I knew it was a horror game, but from the outside, it looked to be just hanging on Call of Cthulhu's coattails. It took a broader approach to horror- covering all of the classics. Many reviews suggested the original rules focused more on fighting monsters than offering horror or frights. For a nuanced perspective on this, see James Maliszewski's retrospective here. I like the idea that Chill serves as a middle ground between D&D and CoC. I offers the concept of a patron organization, S.A.V.E, independent of conventional authority. Chill would see a rebirth with Mayfair's new edition in 1990. It was rumored that another version would be coming out a few years ago from OtherWorld Creations, but I'm not sure of the status of that.

4. Ghostbusters (1986)
I loved the Ghostbusters movie. Within a week of seeing it I was trying to figure out how to put together a game based on it. I ripped apart Stalking the Night Fantastic and created a crazy and highly detailed system. It didn't work for some reason. I couldn't figure out what the problem was- why I couldn't get the feel I wanted.

Then the Ghostbusters rpg came out and I went 'd'uh.' This was probably the first rule-light game that I really got. I'd seen some others, but they felt thin to me. This game actually emulated the genre and narrow setting. In that regard it changed the way I thought about games. It was fun and clever, with the horror taking a back-seat as it needed to. It remains among the best "funny" games out there- striking the right balance between goofiness and playability.

5. GURPS Horror (1987)
This book shifted how our group saw GURPS. We'd used mostly for some fantasy game up until that point. Once we read this and got the idea of the fright check, we ran a lot more horror: pulp, modern, Lovecraftian, etc. We liked the relatively normal level of the characters combined with the ability to build the character you wanted. Our group liked that control. The combat system also lent itself to the danger and speed of horror games, as opposed to other generics like Hero System. GURPS Horror also codified horror as a "genre"- a form of role-playing and a kind of game which could be examined and explained. Like many GURPS books it has gone through many editions and variations. For a really good look at the first edition check out Eric Aldrich's review.

6. Beyond the Supernatural (1988)
I've never been a Palladium guy, although I've seen it enthusiastically supported by many in our area. In some ways it was a logical extension of the brand- a reskinning of the basic system with modern horror trappings. I've heard it brought many innovations to the Palladium system, but I'm how much it pushed horror gaming in general forward. It is worth noting how much the Megaverse incorporates classic horror elements: zombies, nightmarish creatures, territories of darkness. The adventure sourcebook for BtS, Boxed Nightmares, had a great cover which made me pick that up for use in other games.

7. Realm of Chaos: Slaves to Darkness (1988)
While it only marginally belongs on this list, it is looking at how Realm of Chaos (and its later partner Realm of Chaos: The Lost and the Damned) brought horror to the tabletop. RoS has some WHFRP materials in it, but more important is the tone it brings. Chaos in the WH is awful- Lovecraftian scope meets Heavy Metal sensibilities. It is over the top, corrupting, pus-filled, and mutated. It is not subtle- which makes it perhaps the perfect form of horror to smash up against classic fantasy gaming. Here the approaches of traditional dungeon explorers and adventurers leading to death by drowning in offal and effluvium. It is Barker and Splatterpunk vs. Lovecraft and Literary Nihilism. The connection can be seen in GW's The Enemy Within campaign which, at least at the start, feels like a Call of Cthulhu game. These books seem like a reaction to that- a need to dial things up to 11. 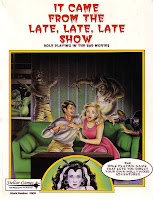 8. It Came from the Late, Late, Late Show (1989)
A game which aims to emulate horror movies...mostly bad horror movies. Slasher films, 50's B Movies, Teen Monsters, and so on. It is a relatively light and goofy game, but one which has seen several editions since it first came out from Stellar Games. There's a fame mechanic which allows for meta-concepts like more famous characters (actors) having access to better props. Like Ghostbusters it aims to emulate a narrow form of horror.

9. Blood! The Roleplaying Game of Modern Horror (1990)
I've had a hard time tracking down specifics on the earliest editions of this game. It came out in 1990, but I had no memory of it at all. The reviews and discussions suggest that it was a more brutal and visceral horror game, drawing from Clive Barker, Hammer films, and The Evil Dead. Players take the role of ordinary people thrust into terrible and deadly situations. In some ways Blood! anticipates the shift to more brutal horror games from White Wolf and Black Dog. We'd see more and more of those games in the 1990's, focusing on visual gore over psychological and existential terror.

10. Nightlife (1990)
The first rpg to focus on players taking on the roles of monsters in a modern world. It anticipates Vampire: The Masquerade, but despite having several editions and supplements, it paled in comparison to that slightly later game. The PCs take the roles of different monsters, broken into kin types, living beneath NY. They hunt and are hunter by other nightmares, but their lives focus on style, fashion, and music. It is weird to see how close the concerns of this game parallel VtM. I think it show the rise of a certain kind of youth and goth culture and the mixing of geek genres going on at the time. 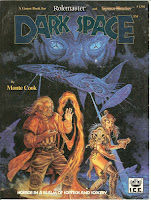 11. Dark Space (1990)
I was surprised to see how early this product came out. I'd pictured it arriving several years later after we'd started to see other genre mash-ups like Dark Conspiracy and GURPS Cthulhupunk. Dark Space is a campaign sourcebook for Space Master, the sci-fi version of Rolemaster. It has living ships, biotech, corrupting psychic powers, and monstrous society of Elder Gods and overlords. It feels like someone ran a really dark campaign of Spelljammer (released in 1989) and decided to write it up. It mashes together those ideas with Lovecratian themes. It is also written by Monte Cook and is one of his earliest published credits.

12. Ravenloft: Realm of Terror (1990)
This supplement, drawing loosely from the earlier Ravenloft modules, attempts to bring horror to the AD&D system. Smartly it focuses on kinds of horror which will work in that context- "gothic" horror in the most classic sense. This boxed set began a line of material and several different iterations, including a "Gothic Earth" which would apply the AD&D systems to an alternate Victorian-era Earth. This supplement remains more conventionally fantastic, with a demiplane of horror which the PCs can wander into. The later Ravenloft Campaign Setting would expand this further to make the Ravenloft setting a solid and serious place to run a fantasy campaign. Ravenloft's interesting because it was well-done, influential, and showed a willingness on the part of TSR to expand their core franchise into genres others had shown were viable.