The Year in Horror RPGs 2012: Part One 43AD to ImagiNation

ARMAGEDDON DAYS HAVE COME AND GONE

Here at the end of a year in which we miraculously evaded the apocalypse, I look back at the Horror RPGs and RPG Supplements of 2012. This was certainly the year of the crowd-sourced project with many successfully funded by Indie GoGo and Kickstarter. We also saw many games arrive in the last quarter; I’m surprised how many popped up in December. There’s a strong trend in sci-fi this year, but also shorter story-driven games influenced by Fiasco, and some quite narrow settings.

This is only the first half of the list; I’ll put the second half up on Friday. I’ve arranged these alphabetically. I also put in a few “collected” entries on this list to cover families of games and types. I’m sure I missed some, so let me know if there’s anything from A to I which I’ve overlooked.

You can find Part Two here.

1. 43AD
There's a happy coincidence in that the game highest on my wishlist comes first. I love games about the Roman Empire (and I've reviewed many of them). I still haven't picked this one up. It echoes some recent dark historical movies Centurion, Valhalla Rising, Ironclad, Black Death, The Eagle, and The Last Legion. In it you play Roman soldiers in a grim and hostile Britain, with crawling magics and horrors moving at the edge of camps and settlements. There's more than a little Cthulhu Invictus vibe to it, but in a narrower vein. I like the idea of Roman soldiers inadvertently forced to become hunters. I'd read a series of novels set in that period and place, like Ruth Downie's novels crossed with Brian Lumley (or a better horror writer).

2. Call of Cthulhu
The old favorite Call of Cthulhu announced a 7th edition, hinting at some significant changes- to the chagrin of some. It remains to be seen what that will actually look like. A yet to be released project, the Kickstarted Horror on the Orient Express grabbed a good deal of attention. But CoC itself saw a number of interesting supplements released Masks of Nyarlathotep Companion, Terrors from the Skies, , Cthulhu by Gaslight 3rd Edition from Chaosium. Companies produced striking CoC materials like Age of Cthulhu's Age of Cthulhu VII: The Timeless Sands of India; Pagan's Bumps in the Night; the first of the upcoming Achtung! Cthulhu products Three Kings (CoC); Cthulhu Britannica: Folklore; and Pegasus Spiele's German-language supplements like PDF4: China: Cthulhu im Reich der Mitte.

3. The Call of Cthulhu Family
It's worth considering the many supplemental products put out for non-CoC Cthulhu-based games this year. Trail of Cthulhu added Flying Coffins, RMS Titanic, Sisters of Sorrow and forthcoming compilation Out of Space. The Laundry published The Mythos Dossiers and License to Summon. CthulhuTech returned with Burning Horizon. Macabre Tales spawned A Translation of Evil and The Secret of the Dead Man's Satchel. The ever-awesome Cakebread and Walton published Clockwork & Cthulhu and Dark Streets, a setting of Lovecratian horror in 18th-century London. The Void Quick-Start which seems to be a Mongoose Traveller Cthulhu setting.

I'm sure I missed some others produced for games like these.

4. Clockwork & Chivalry
So this breaks my rule about second editions, but I have a couple of excuses. First, I left this off of my previous lists. Second, this revision and republication comes hot on the heels of the original version so there's not that big a gap. Clockwork & Chivalry offers a setting with several possible directions. For me it feels like a post-apocalyptic historical setting with a hint of the fantastic thrown in. This is a world turned upside down, with order at all levels overthrown. This opens the door for other awfulness to enter and corrupt. Add to that the ongoing conflicts between factions and man's general inhumanity to man. It feels like an updating of the best parts of The Enemy Within Campaign, early modern mixed with conspiracy and corruption. Two additional related products cement C&C's horror resume: Dark Streets and Clockwork & Cthulhu. 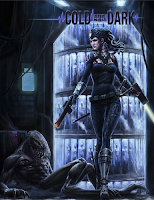 5. Cold & Dark
Another game I just spotted as I was putting this list together. It presents another take on space-horror, this one centuries in the future. It looks to have a little bit of everything strange races, distant worlds, corruption of the Void, and lots of grit and chrome. It arrived just after Halloween, so I haven't seen much in the way of discussion or reviews for it. There's an rpgnet review, but it doesn't provide a great picture of what the game's about or what makes it unique. There's a free 65-page quick guide available on RPGNow.

6. curse the darkness
Here's another supernatural post-apocalypse horror setting, but different from any I've seen before. A figure with a strange philosophy of absolute altruism wreaks havoc on the world demanding everyone aid one another with no compensation- spiritual or otherwise. Those who refused were taken by creatures from The Between. The game itself takes place ten years later with the players forced to choose between acceptance and submission or struggling to take back the world. I have yet read this, just synopses and read-throughs. Written by Matthew McFarland it uses a playing-card based resolution system. The system takes into consideration the loss of PCs and how that can act as a spur for the rest of the group. curse the darkness has many interesting ideas. 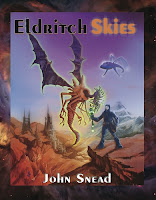 7. Eldritch Skies
This one popped up on my radar a few months ago. It offers a pulp-sci fi meets Lovecraft setting using Eden's Cinematic Unisystem. Mankind has ventured to the stars and found the various eldritch beasts of the Mythos. In this alt history, our ability to travel beyond our planet is tied to discoveries from these creatures (stolen from the Mi-Go and other fellow travelers). I like the concept of a background radition of weirdness affecting people (and I start thinking about Event Horizon at that point). We have several Lovecraftian sci-fi settings now: CthulhuTech, Yellow Dawn: The Age of Hastur, Chthonian Stars). I'll be curious to see how the system operates- Cinematic Unisystem, while fun never struck me as a game for handling tense and dramatic horror. But if the intent is something lighter, it might well fit. One of my favorite bloggers, The Armchair Gamer wrote a review up of Eldritch Skies.

8. Enter The Shadowside
A new horror rpg which has been actively promoted and supported by author Marco Leon. This has been a year in which I've seen several small press and horror publishers come off really badly in their social communications: rants, excessive defensiveness, insulting people who say anything remotely bad about their work, sock-puppeting, and so on. On the other hand, Leon seems to be an example of someone who knows how to present himself. He's set up a decent community on Reddit, and seems to strike the right balance between advocacy and listening to input. Mind you that's a superficial impression on my part, but it is worth remembering. This game has risen to the top of my next purchase list at least in part because of that positive impression. Leon's quite open about new users adding to the canon, improving audience buy-in.

Enter the Shadowside is a game of occult conspiracies, with an element of "rent veil." The players have become aware of a reality known as the Shadowside. The characters bind and partner with spirits from these realms for power. Several different secret societies exist. I will say I had to hunt around to get a clear synopsis of this from a couple of reviews. The publisher blurb on RPGNow is evocative, but doesn't do a great job of telling the reader what they'll actually be doing. The resolution system is unique, using a table and a ruler to determine difficulty. There's a really excellent and thorough write up of the game by the designer for the RPGGeek "Share a Game" Series: Share a Game - Enter The Shadowside.

9. Epoch
I'm always interested in games which use new mechanics to add atmosphere. Dread's obviously the poster child for this, but something like the Chance cards in the surrealist rpg Itras By is an attempt to add a unique mechanic to support the genre. Epoch offers a broad survival horror rpg system, with a focus on one-shots. The subtitle "Experimental Paradigm of Cinematic Horror" doesn't do the greatest job of selling the system*. I'm still working through the rulebook trying to wrap my head around the game.

Epoch reverses the general approach of rpg rules, putting the GM discussion first. This focuses on player involvement, comfort, and buy-in. Epoch's mechanics revolve around players being dealt resolution cards at the start of the game and then playing them during challenges. Players who have exhausted their hand go out due to death or insanity. The rules include a couple of scenarios, and I'm looking forward to seeing how it actually plays. The game's narrative focused- with players given the chance to declare and control some things about the situation. Horror thrives on player uncertainty and lack of control, but Epoch seems to substitute the randomness of the draw and genre acceptance instead.

*It was politely and gently pointed out to oblivious me that the name of the game is an acronym for this "subtitle".

10. The Final Girl
A horror-movie rpg, aimed at relatively quick one-shot play. The GM role shifts, with multiple characters being picked off over the course of a session. It also uses playing cards for resolution. The game focuses on the inevitability of the tropes for these kinds of films. Author Bret Gilan also wrote and published the brief horror rpg Cold Soldier this year. That's a two-player game in which you essentially play a reanimated husk.

11. Horror Round Up
In my lists, I've tried to focus on new games and products. I've also primarily stuck to 'professionally' published- but that definition has changed significantly in recent years. Here are a few extra supplements and games which came out this year that I haven't given an individual entry:
Several new horror-themed playsets and supplements arrived for Fiasco: Rise of the Walking Dead: Night; Back to the Old House; Romero, TX; Living Dead

Having played a horror-themed one this year, Camp Death, I will say they seem aimed at advanced players. I'd been warned about this when I first played Fiasco, that the most ordinary set-ups offered the most consistently interesting play. I didn't get that until I actually tried an offbeat one. In that the focus shifted from characters and motivations to genre trappings and tropes. We played out a story, rather than playing out the people. Still I think Fiasco has legs for horror- especially with a group who have played it multiple times.

12. ImagiNation
A free rpg created by James Desborough and Andrew Peregrine. The subtitle is "Roleplaying in a world of art and madness." The layout and design is nicely done. I've read some older Postmortem Studio products which were read to read. ImagiNation's text design is cleaner and clearer. The artwork's more of a mixed bag and your reaction will depend on how much you like "found artifact" illustrations and text. There's also some real clever bits (like the CYOA section). In the setting, the worlds of imagination and reality have begun to collide. In particular the British Isles have been subject to the manifestation and manipulation of dreams and nightmares. These lands have been isolated and cut off from the rest of the world. The PCs play scouts heading into these lands for knowledge, rescue, or other reasons. There's a focus on madness, and I can imagine this being run as a darker Silent Hill style game or perhaps something more ambiguous, like early Grant Morrison.