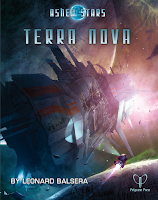 TAKE TO THE STARS

Talking about unsuccessful game experiments offers different insights from successful ones. I hack and change rules often- that’s how we ended up with playing and revising the same homebrew for the last 10+ years. I’ve talked in other posts about the odd reaction several groups I played with and ran for had with GUMSHOE, primarily in standard action resolution. They bought into the investigation side and the settings, but often disliked the d6-based mechanics. So I’ve considered a number of solutions to that problem. Prior to this I’d run GS for Esoterrorists, a spy-game hack, and Mutant City Blues. I’d also played in a Victorian-era campaign.

We had a break night after I wrapped up my FATE-based Scion campaign and before the players would be moving on to another GM’s Pathfinder game. I offered to run a one-shot for the five players available. I considered several options before ultimately deciding I wanted to try out Ashen Stars on them. I had the Dead Rock Seven anthology as well as the double-adventure Tartarus/Terra Nova. I settled on running the Terra Nova adventure since it seemed to rely least on knowledge of the setting and at first glance looked like something we could get done in an evening. It is a solid adventure, worth picking up.

Of the group, only one had played Gumshoe before. I decided I wanted to try out another standard resolution system. Since I’d played it for the first time recently and like the speed of it, I bolted on Savage Worlds’ mechanics. I used the sample characters from DR7. In order to calculate their die roll for a General Ability, they essentially raised it one die rank for every two points So if someone had a 1-2 in Preparedness, they used a d4. If they had a 5-6, they used a d8, etc. None of the players had played Savage Worlds, but if figured it would be just as easy as explaining the usual GS system, since it is disconnected from the investigative skills. I made a few other tweaks as well and offered the players some extra points to spend on both sides. I had a couple of handouts with the skill descriptions on them.

The session as a whole went fairly poorly, with more frustration and confusion than I’d seen in play for a number of years. I ended up stopping a little early since we had a ways to go and would have had at least another hour of frustrated play.

SO WHAT DID I DO WRONG AND WHAT WENT WRONG?
WHAT DID WORK?
WHAT WOULD I DO DIFFERENTLY? OVERALL
Most of this comes down to bad choices on my part. I could have and should have anticipated some of these problems. I ended up doing a poorer job of offering fun than I usually do (I hope). I continue to like GUMSHOE conceptually, and I enjoy all of the settings crafted for the game. It does, however, present some barriers to entry. That may be less for groups which play crunchier games or a wider variety of them. I still want to show off some of these to the players, but I will invest some more prep work next time before heading in.
Posted by Lowell Francis at 1:30 PM