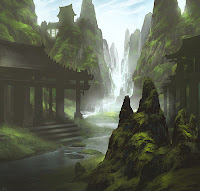 THE MANY MAKE ONE

I've posted before on the family creation process for our Legend of the Five Rings campaign. A couple of weeks ago we finally got to sit down and try that out.  We began by picking the kind of daimyo trhey wanted. After some discussion, the group narrowed things down to a Scholarly or Spiritual Daimyo. A couple of other had been on the table, but generally the players shied away from the disadvantages associated with those choices. That’s an interesting consideration. If it was shorter term game, with the sense that we’d get to play again, the group might have been less cautious. But given we’ll likely have just one shot with the campaign, they erred towards caution. Since many of the decisions would come down to two or three hard choices, I decided I would rotate the “tie breaker.” One person would make the call for an item, and then that role would pass to their left for the next one. The final decision was to go with a Scholarly lord (much to the chagrin of the player who planned to be the general).

Selecting family virtues came next and they took a slightly different approach. They picked their least valued, Makoto “Sincerity,” first. That choice they justified given that their neighbors would not trust them as upstarts. They chose Yu (Courage) and Jin (Compassion) as their important virtues, but Chugo (Duty) as their highest value. That’s interesting in that being the central virtue normally of the Scorpion. I have to consider how the NPCs will express that. These choices were less difficult than I feared. Given the number they could pick, everyone got something they liked.

HOLDINGS
Next I had them each select two holdings for their province- with each player getting a pick on two separate rounds. They began with Mountains as a pre-set feature, since that fit with the background. They chose:


They tended to focus on details which couldn’t be added later. I’ll have to take that into account if I rewrite the mechanics. There’s a definite incentive to take those. Most players did a practical and a personal pick. I felt generous, so I gave them the Rice Farms at rank 2. Given that I pictured at least a portion of the lands having been the Lion’s fields, that made sense. I also gave the lead player for the round one extra pick and he selected a Dojo.

For the meibutsu, the strange little thing for their province, they selected having the hottest wasabi in all of Rokugan.

ASPECTS
For family aspects, they had to take NONE OF US IS AS GREAT AS ALL OF US. That’s a default in Wick’s Blood & Honor and I kept it. There was some debate about the other three picks. Eventually I had them each nominate a couple and we went with those with overlap.


Those interesting choices really change the complexion of the NPCs, general retainers and samurai within the province. I didn’t force the players to choose one of these for their characters- and as you’ll see they went in very different directions. Instead I have to consider these a general feeling and perhaps the tone set by their Daimyo. On the plus side, they have skilled craftsmen, can resist torture, and a good at intimidation through force. On the negative side, they’re overly gracious to the peasantry, they’re more brutish and uncultured, and they only use violence as a last resort. That’s a tough set of directives for a family effectively occupying a land long under the dominion of another Clan.

The group chose the name Shimasu, drawing from a phrase dictionary, meaning Breathing, as in the breath of the Dragon. I’ll come back to their choices for duties in a moment, since that reflects their character creation choices.

TRUTHS
Each player had the opportunity to declare a truth about the province:


A couple of notes on those. At the beginning of the second session, Alan, the player who introduced #5 asked if he might perhaps rescind that. That maybe his Monkeymen might be a significant problem…I said no. The rumored Monkeymen would remain. I also liked the second choice there- that the people of the province are well-known for their loyalty to their daimyo. Given that the new clan and family have only just taken over these lands, that loyalty will actually be to their former daimyo. They’re effectively occupiers trying to win hearts and minds. If they can do so, they will have a stalwart populace. But actually getting to that will have major hurdles.

One mistake I made was trying to put together both the family creation and character creation processes into one session. I would have been better off doing the former and then setting up and discussing elements of the latter. However since we’d had some delays and I knew the holidays would bump us, I wanted to get both done. As it was, the CC process felt a little overwhelming since it presented a completely different set of choices and concepts. I’d given the players the rules ahead of time, but knew that they would not have actually read them- or at least I needed to assume they hadn’t. We got a ways into character building before I decided we should call it and finish it up the second session. That ended up being a good idea as we spent a great deal of time finishing choices for flaws and coming up with aspects. That process really needs time to breathe.

THE PLAYER CHARACTERS
The players each chose roles for their characters, and then picked two important positions which would be filled by NPCs. These were defensive choices to keep me from hosing them in these areas. They selected a Commissioner of Mines and Other Resources (Mirumoto Akakado) and a Master of Taxes (Kitsuki O-Mugi).