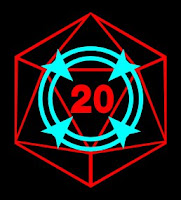 This week Play on Target takes on a topic near and dear to my heart: Superheroes. We consider the genre and what kinds of games work best with it. Once again I talk excessively...I probably owe my co-hosts an apology after this one. We talk about how rpgs work with a superhero setting. In the future we hope to hit some other genres. When we come to sci-fi, I’ll probably be the quiet one. Still I’m pretty pleased with the episode and I think we offer some decent insight into what we like about the genre and what would make a good entry point. We also raise the Math issue, though I don't talk about some of the cat-fight arguments I've seen about that online.

SUPERHERO RESOURCES
I’ve been slowly working my way through the History of Superhero RPGs. In some ways it has been even more daunting than the Horror RPG History. I dig the genre so I find myself bringing in more milestone and marginal products. Plus I wanted to keep the lists smaller so they end up covering fewer years.
In addition, I assembled a couple of fat resources lists over at RPGGeek for those of you who might be interested.

The first brings together all the Enemies books I could find. Supervillains Amok: Superhero RPG 'Monster Manuals'. Some of these can be found pretty cheaply. I always like inspiration, even if I don’t use the stats. To complement this I also assembled a list of super sourcebooks which cover the evil and good organizations of the supers world: the Checkmates, Cobra, and SPECTRES of those settings. Bad Company: Organization Books for Super RPGs.

I’ve written a few other posts which consider smaller bits:
I should also call out two superhero rpg experts who’ve helped and you should keep an eye on. We name check Barking Alien a couple of times in this podcast. You should check out his blog which often touches on supers rpgs, but covers many other topics. I think its hugely useful to have other voices in the conversation. Especially those who’ve had different experiences with the same games and a different family tree of play. Blue Tyson on RPGGeek also loves superhero games and he’s been hugely helpful in fleshing out those lists I began above.

For another perspective on Champions, check out Ross Watson’s series of detailed reviews on the various editions.

ACTUAL CAMPAIGNS
While I’m not running a superhero campaign currently, we’ll be starting up the third and final arc of our M&M Year One game in January. It will be the Cosmic Conclusion. I did recently run a couple of sessions of Ross Payton’s Base Raiders which uses the same version of Fate as Kerberos Club. I ran it online with the rules as written and that went pretty well. You can watch the video below, if you’re so inclined.

But I also adapted the core concept and some of the mechanics to the card-based homebrew we play (Action Cards). I hadn’t done superheroes with that before. We did a f2f session of that. Here are some pictures from the episode. The set up's a mix of HeroClix, AT-43 tiles, Japanese scenics, and the bits I tore out from an old motherboard of a 52" LCD TV. 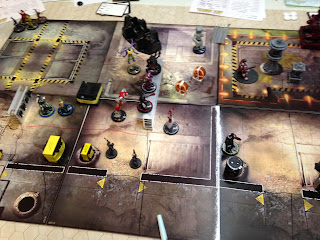 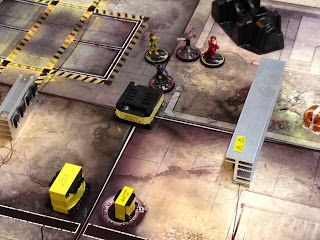 You can also listen to the audio of the session if you dig Actual Play material.

MODERN HEROES
So what’s happening with superhero rpgs right now? Champions seems to have lost much of its dominance. 6th Edition has some cool stuff, but output for the line diminished and then dropped off. Mutants & Masterminds shifted to 3rd edition and rather than regular support publications, Green Ronin has shifted to fewer books combined with a rich library of electronic materials. Savage Worlds and GURPS both lack a tentpole property or setting to push their supers material. Fate Core doesn’t yet have a big superhero setting and that may not be necessary given the nature of the game. Some of the most interesting work with existing games comes from Icons and Villains & Vigilantes 2.1. The former has a significant volume of third-party material coming out for it and the latter has an active fanbase for V&V as the OSR supers game.

But when I went to begin assembling my overview of new superhero stuff which hit the shelves this year I found a ton. That includes new games like Bulletproof Blues, Apex, Action Galaxy, Man-Made Mythology, MightySix, Prowlers & Paragons, and Triumphant!. Several games have a unique take on the genre like Base Raiders, Rotted Capes, and Better Angels. We also got some great new sourcebooks like Department 88 for V&V, Emerald City for M&M, and the Annihilation Essentials Event Book for Marvel Heroic (which quickly vanished). It’s been a boom year for supers. Perhaps the closure of City of Heroes and the decline in Champions Online has moved some interest back to the tabletop?

THE SUPERHERO GENRE IN RPGS
Play on Target Episode Roundup

If you like RPG Gaming podcasts, I hope you'll check it out. We take a focused approach- tackling a single topic each episode. You can subscribe to the show on iTunes or follow the podcast's page at www.playontarget.com.
Posted by Lowell Francis at 1:59 PM