This list brings together the various games which have combined superheroes (or beings with super powers) and World War II. That's a classic trope- especially since the first modern superhero comics arguably came to prominence during WW2. I have some additional discussion on the ideas of WW2 superhero stories here- A Cape Too Far: Supers & World War 2. 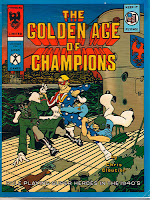 1. The Golden Age of Champions
The first major attempt to provide a WW2 sourcebook for an existing superhero system. Champions' other major rival, Villains & Vigilantes (2nd Edition), hadn't done one. This book was a little weak- taking a very goofy and exaggerated four-color look that seemed to be more nostalgia than an actual look at the comics of that age. There had been some pulp games before this which had dealt with WW2, but usually they skirted it or had little in the way of superpowers (Crimefighters and Daredevils for example). Oddly this book wasn't actually done by HERO but instead by a company called Firebird Ltd. However Hero Games did later revise this supplement...slightly...keeping the goofy tone and look and making it more consistent with the "universe" they'd established

2. All This and World War II
Marvel Superheroes RPG Sourcebook. The closest MSHRPG got to a real sourcebook for WW2 in the Marvel Universe. Here we get a module that has time travel and is part of a trilogy of adventures covering different eras of the Marvel Universe. Still it provided the stats for Captain America, the Howling Commandos, and the Invaders, so that's a plus.

3. The World at War
DC Heroes Sourcebook. A really, really nice sourcebook detailing the WW2 universe as considered in the DC continuity at that time. This would have been in the post-Crisis decade in which DC still tried to maintain a solid and clear history. On the superhero side, Roy Thomas & Co. All Star Squadron had really rewritten the history of WW2 for DC pre- and post-Crisis. DC, of course, also had their own WW2 military character Sgt. Rock.

This book is impressive- it covers the supers of the era, but also history, a timeline, considerations of how warfare and powers intersect, ideas for managing a campaign in this era, and a multitude of NPCs. There's even a section covering characters from the period written out of continuity. 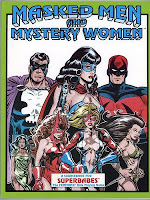 4. Masked Men and Mystery Women
Superbabes Sourcebook. Allow me to admit that for the longest time I actually thought that Superbabes was a joke. Something like Macho Women with Guns for Supers. So I was little shocked to see that it was for a real line of comics, with a number of actual sourcebooks, including this one which covers several different periods of the "Femforce" universe, from pulp through the 1960's and of course including WW2. The prolific sdonohue has written a review of this here: The Short Version? Good expansion for the game, good sourcebook for AC Comics fans, so-so Golden Age sourcebook.. That seems to suggest coverage of WW2 is pretty slight.

5. Glory Days
Brave New World Sourcebook. BNW's one of those games I've looked at over the years but never picked up anything for. All I can say for certain is that it is a dystopian supers world with a strange American Hegemony in the modern era. However it seems like the earlier periods actually had a more conventional supers "history" and that's reflected in this book. An assumption, but this is a pretty hefty book.

6. Adventure!
This probably just edges into the WW2 period, but given the link between Adventure and Aberrant we can see pretty easily this material covering the war. We have Nazi bad guys here and a "quantum" explanation for abilities beyond the ken of normal human beings. Not obviously guys in capes, but some mystery men of that ilk. All of that is to say I think this is an often overlooked and excellent game will a lot of applications, including doing a Doc Savage vs. the Nazis game. Does a nice job fitting the classic Storyteller system to the genre.

7. Godlike
I don't really get the ORE- One Roll Engine- at least in reading. I'd love to see it in play. That aside Godlike sets the bar for how one approaches the idea of supers in a World War II setting from a "realistic" point of view. We have a specific and logical supers power framework (i.e. not magic or other garbage) and the book really looks at the implications of having persons with these kinds of powers within the various theaters. A go-to book right now for anyone planning on running this kind of campaign. 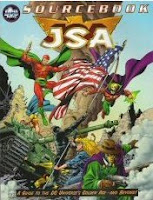 8. JSA Sourcebook
DC Universe Sourcebook. Part of the d6 version of the DC Universe rpg. I never actually saw any of these supplements. However this one covers the JSA in the continuity of the DC Universe at that time. It has material on running a WW2 centered campaign using these characters. An interesting artifact in light of the massive changes in continuity for DC. The main world doesn’t have heroes who fought in WW2, and even the “Earth-2” material seems to absolutely downplay those ideas.

9. The Fires of War: The Algernon Files Volume 2
HERO 5/Mutants and Masterminds 2e Sourcebook. The first The Algernon Files book was among the best of the second-party products for Mutants and Masterminds. It presented an excellent collection of heroes and bad guys with their own internal stories and links. It created something of its own universe, but scaled back enough to make it usable with other supers material. This volume steps back within the same "history" to provide a sourcebook for WW2. It provides a slight amount of general background material and then a ton of characters for the period: Allied, Axis and Independent. A really useful book available separately for these systems.

10. Golden Age
Mutants & Masterminds 2e Sourcebook. This offers details for running Golden Age adventures, including the war. A great deal of the book talks general about what makes up that kind of story, along with advice of character creation and gamemastering. It does provide some material on history tied particularly in the Freedom City world of the core book. It doesn't focus on that exclusively, instead providing a decent toolbox plus an adventure which allows time travel between present and past settings (a classic motif). 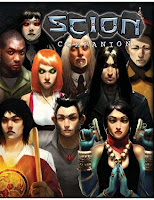 11. Scion Companion
In Scion players take the role of the children of the old gods (Thor, Zues, Isis, etc) which gives them powers which might be read as "super". The modern version of the main books plays that down a little in favor of the supernatural conflict. One way to see this line is as a contemporary version of exalted. The Scion Companion, however, provides a new frame in the last quarter of the book: Scions in WW2. But it adds to that the idea that certain Nationalist Concepts could also serve as "Gods" creating children with a particular agenda of the times. I don't love it- it raises more questions than it answers, but it would be another approach to having Superheroes in WW2.

If anything it reminds me a little of the two-part story from Fables which has Bigby Wolf fighting the Nazis.

12. Amazing Stories of WWII
Vigilance Press has created a series of adventures and seeds for playing a World War Two campaign using the ICONS system. You get NPC collections as well as plots. I haven't looked at these, but I'd be curious about the mythology and hero universe they're building here.

13. Finest Hour
A sourcebook for the troubled Squadron UK RPG (a retool of the old Golden Heroes RPG). This presents a campaign pack for running a game set in this period- borrowing from the best in classic pulp traditions. There’s an interesting touch in that players generate their characters from ordinary men and women, rather than building a straight superhero. You can see an excellent review of the product here.
Posted by Lowell Francis at 10:32 AM