The video for Session Fourteen:
This Episode:
Last night we had a session after a two-week break. We’d introduced a new player the previous session, as well as a mystery hook. That’s a tough set of obstacles to come back into when you have a gap. Mystery game’s require a more open approach and when you come in a little cold they move slowly. I think I did a decent job, it just took a little bit to put things into motion. I may also be second-guessing myself, a classic GM syndrome.

In order to join the Freehold as full members, the motley had to complete tasks given them by each of the Seasonal Courts. Last session they’d received their task from Beckoncall, prince of the Spring Court. They were to find a changeling named Cantorian Wolf and bring him back to the Prince. The twist was that while Beckoncall knew Wolf had stolen something from him, but didn’t know what had been taken.
Max told them that if they needed anything to call him- and asked to be kept in the loop on their progress.

Morosa checked in with one of her contacts, Raido, a former member of the Summer Court. Her critical success netted her some crucial information. Although Wolf didn’t advertise it, he was a potent Onieromancer and have studied deeply into the Contracts of Dream. She also found out that Wolf normally made his money through scams and cons on tourists.

Amber hit the pavement to see if she could did anything up on that angle, but didn’t find any new leads. Kah consulted with the winged population of the city- animals which often have a sensitivity to the supernatural. They had nothing to say about Wolf, but did mention that the Werewolves of the city seemed to be active and moving around more than usual.

The group reconvened and headed over to the Autumn Court to consult. They’d picked up that Wolf had dealings with two members of the Court. The first was someone they hadn’t yet met, Always There. He seemed to be a Darkling perhaps or perhaps a Fairest. He turned out to be one of the well-known experts in the art of dreams and dream manipulation in the Freehold. Worried that Wolf might catch wind of their pursuit and lacking in any skills in that area, the Motley asked if Always could teach them some protections. He agreed- in exchange for some Hedge Fruit they’d gathered. He mentioned that specialty goblin fruits were relatively rare in Las Vegas- most of the potent groves were in Hob hands. Always There confirmed that Wolf had strong dreaming skills. He also expressed reservations about him. Always feared that Wolf saw those talents as a means to power and wealth, rather than as a gift to be shared.

Next, and a little reluctantly, the Motley spoke with Zippet Rausch, a Swarm Elemental. They’d seen him before. He seemed to be the Autumn Court’s keeper of Occult Lore. The disconcerting Rausch came down to speak with them reluctantly. He’d been told by Shark-Fingered Princess to give them his full assistance. Rausch confirmed that held dealt with Wolf recently. He’d personally traded a Dream Bezoar to him, formed from the nightmares of a coma patient. This expendable item could temporarily increase the potency of one’s dream powers. Wolf had also been seeking a powerful token, the E-Razor. This could be used to cut memories. Rausch had told Wolf that the token might be available at one of the Goblin Casinos- Lil Pals. 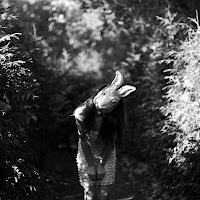 Afterwards, John checked in with his Hob contacts to find out about Lil’ Pals. The casino often traded in tokens of various potencies. Those wishing entry had to pay a cover charge of a doll which looked like themselves. The group made up various representations of themselves and headed down. They took a Hob Hedge taxi, one of the Runabouts, for the first time. It was an experience both unsettling and sticky. They arrived at the casino, part of the Hob Strip, but at the far end. A Hob in a rabbit mask waited for them on a Hedge Path and led them deeper into the Hedge business.

Lil’ Pals looked like a Hollow built by Hobs, messy and barely held together. The walls everywhere had been decorated with thousands of scavenged and traded dolls. All of them had been “fixed” leaving no original toy intact. The eyes and heads slowly turned to watch the Motley as they moved around. After paying their cover charge, the group moved around, checking out goods on display. They found a Lens-Flare Scotch tape, Panic Bucket, a set of Murder Stickers, a fragrant Anti-Static Band, and a magic Ice-Cream Scoop. Andi, drawn to the essential ice Cream Scoop, gambled on that and was able to purchase it. Whatever it touches tastes like ice cream…whatever it touches.

They spoke with a Hob-cierge who told them that they didn’t have an E-Razor, but that they’d traded it away to a Changeling, Cantorian Wolf. The Hob assumed they were there to complain. The E-Razor was a dangerous device, “with a mind of its own.” This seemed to have sinister overtones, suggesting the catch and curse on the token might be particularly powerful.

I think I caught everything…I may have missed a couple of bits.
Posted by Lowell Francis at 2:04 PM