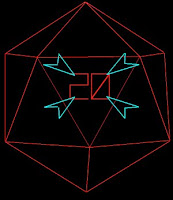 For this episode of Play on Target we wanted to consider unusual mechanics in role-playing games. In this case we focused primarily on unusual resolution systems and devices. I should note we jump into the topic a quickly and without too much set-up or explanation. That’s my fault this week since I hosted. We trail in from a discussion of 24 Hour RPGs, in particular the RPG Geek 24-Hour RPG Contest. It generated many unusual and different approaches- common in these kinds of contests. If you want to see novel (and untested) game thinking, look at one of the 24- or 48- Hour RPG Creation Contests sponsored by various sites. Eventually I do get around to announcing the topic, but I apologize for that.

I think we did a decent job of offering an overview of unusual mechanics in this episode. We could easily drill down further in another one- trying to figure out the rationale behind such systems: what do they bring to the table? How does a mechanic actually enhance the game experience? Do mechanics matter? I’ve heard arguments on both sides of that question. Some believe that mechanics don’t matter- that the group and gamemaster shape the experience much more significantly than the rules. They suggest the rules contribution to play is negligible. On the other hand, there the opposite approach which suggests that some games simply don’t work with some genres or game forms. In this reading the game rules shape and drive how the play’s experienced. In have to suspect that designers of rules heavy games have to tend towards this position. Otherwise why create elaborate systems?

ANALYSIS PARALYSIS
My position- and that I suspect of most gamers- is that the rules can get in the way and make some parts of the experience easier or more difficult. There are various dimensions to that, but it can be hard to measure or track. Different GMs and groups handle a set of rules quite different (to some people’s chagrin). Our version of GURPS and Rolemaster was miles away from how it was actually written. I can only assume that holds true with other groups. It’s worth considering what we can measure and consider. For example, I think we might be able to track and measure resolution complexity, by considering steps and time involved with any resolution on the micro-scale (X makes an attack on Y) and macro-scale (span of a combat). Complexity does not necessarily increase resolution time or vice versa. For example, I can imagine a rules light system which requires a great deal of narration or requires many successful hits to take down any opponent. Or an elaborate and detailed procedure which boils down to one roll to figure out who actually wins a fight.


So, for example, let me consider that in relation to several superhero games, which often have a combat emphasis. At base, for example, Champions actually has a pretty simple set of resolutions. Players choose an attack, often a power. In some cases like HTH, they may pick a maneuver which has additional complications. But generally, it is pretty easy to make a choice about action and figure out one’s Offensive Combat Value. Target range can have an impact, and they may be able to respond, but in most attacks that won’t be an issue. The player rolls an attack against the target’s Defensive Combat Value, DCV. If they hit, they roll damage, and the target figures out exactly how much they take by subtracting any defenses. So why does Champions take so long to resolve, even in the hands of veteran players? Book-keeping impacts this a little- with different possible conditions, two types of primary damage (Body and Stun), and spending Endurance for powers. Having several kinds of damage (entangles, standard, drains, etc.) means more choices. The turn structure- with split phases allowing more attacks for faster characters- can also drag this out. Characters have more options for recovery. But the major culprit, I’d argue is that it just takes a while to take someone out. You have to make contact with a target first, and even then, rarely can you one-shot a bad-guy, IMHO.

On the other hand, Mutants & Masterminds has a great deal of detail, but the combats generally go faster. The turn structure’s more straight-forward- with a simple initiative countdown and all having the same number of actions. There’s detail- like Champions most of that lies in the character generation calculations. It has complexity in the conditions which can be applied to targets, but like Champions, there’s really only one damage step. Bookkeeping is reduced, but the big difference lies in how hard hard it is to damage and or disable a target. M&M’s just faster and has fewer incremental recovery options. The most recent (and defunct) Marvel RPG would be as fast, but it has a couple of speed bumps. Character “powers” are arbitrary and asymmetrical. On basic character they’re fairly simple, but some of the more advanced ones have conditional activations, requirements, and consequences. Players have to learn their characters well. More significantly, each turn when players take their actions they have to build their pool of dice- drawing from several abilities and narrating how that works. Despite that it remains extremely quick.

It’s an interesting way of breaking down what’s going on in the mechanics- primarily for assessing speed and pacing. I’ve often fretted about a game’s mechanics moving too slowly for my liking. But I need to think about how that fits in the bigger context. For example, when I played Marvel, the dice-pool building felt like a clunky step. But it is a key character play moment, and is really the only crunchy bit going on there. The rest of it moves so fast that slow down doesn’t draw play out too much. I think this approach could be useful in figuring out where the speed bumps. The next step is to assess what those rules add to the game and the strategic experience. For example, we stripped away considering many of the modifiers in GURPS combat when we played. It made it faster and clearer to the players. The cost was a certain degree of realism- and throwing balance off for some things, like certain weapons. But generally it didn’t undercut the players’ purchases. Some set of complexity are features, for example phases Champions. The system’s built around that and removing or tweaking negates a good deal of the systems logic. This kind of reading might also be useful for figuring out if these new and novel mechanics help or hinder play.

FINAL THOUGHTS
My favorite line from the episode is Brian’s: “I just don’t want to play Spider-Man being late to school…” As GMs and game retoolers we can think about how the mechanics make games and play more interesting. Can we use them to make less interesting aspects more engaging. ST Wild on Roleplaying recently directed me to the Extra Credits video series. They had an episode talking about Combining Genres. They made an interesting point about the game Puzzle Quest. That video game takes one of the more repetitive elements of JRPGs, combats, and figured out how to make them engaging in a different way. Instead of making them real-time or action-oriented, they make those fights into a puzzle. Each fight has a satisfying challenge to it which backs up the rest of the game. I’m wondering if we can do that at the tabletop?

If you like RPG Gaming podcasts, I hope you'll check it out. We take a focused approach- tackling a single topic each episode. You can subscribe to the show on iTunes or follow the podcast's page at www.playontarget.com.
Posted by Lowell Francis at 12:10 PM