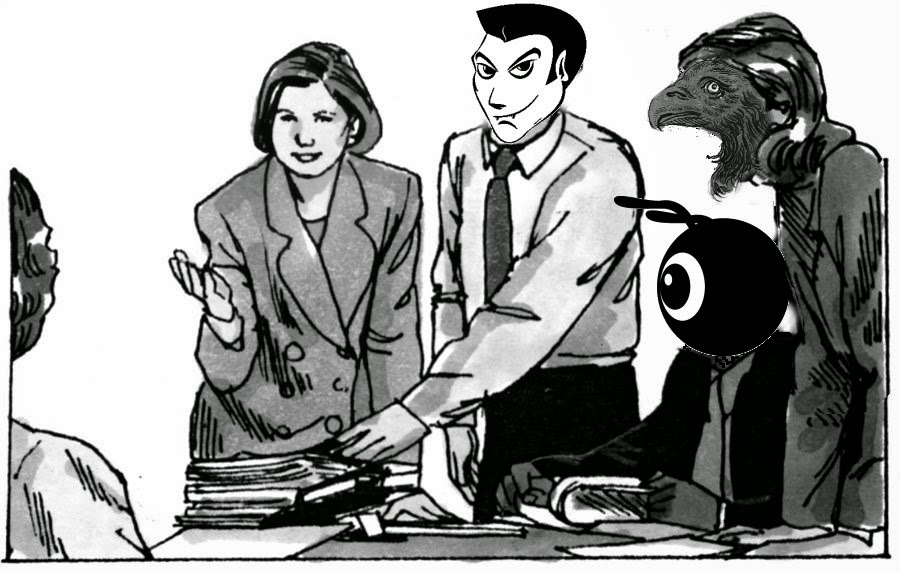 HAVE YOU TRIED DISMISSING AND RESUMMONING IT?
I'm working on a game called Magic, INC. It's an rpg about office workers in a magical corporation:
Your department is at the very, very bottom. You and your team have just managed to hang on- avoiding responsibility and blame. But to do so you have to work hard- carrying out desperate missions to alter budgets, undercut rival divisions, and mystically cloak your faked resumes. It's an episodic game. Think of a mix of Monday Begins on Saturday, Leverage, The Magicians, Office Space, Harry Potter, and The IT Crowd.

WHAT THE WHAT?
The concept comes from a pitch I wrote a few years ago (which I still like, though I wonder if it might be stronger if I flipped some of the genders):

The High Concept
Mundane computer geek mistakenly hired by secret magical corporation.
The Pitch
Sheridan Knock gets the job of a lifetime, but lying on his resume may get him more than fired. Now he must provide IT support for an arcane corporation while hiding his lack of magical knowledge.

Cast
Sheridan Knock: Computer tech and social throwback. Talented and hard-working- he believes that ought to be enough. He shouldn't have to remember the names of his co-workers' kids; he shouldn't have to attend company parties, he shouldn't have to shout to get noticed. But that hasn't been enough in his field.
The Stygian Level IT Support Crew: Talos, the bronze harassment machine; Beckoncall, the internet troll; Ishnarod Kant, the sorcerer of work avoidance; and Viorca Snode, the heterogeneous fairy.
Aisling Grome: A Pygmalion-like magical construct and Knock's angry ex-girlfriend.
Cricket Sulascu: A spirit medium, and Aisling's roommate. She rejects Knock primarily because of the spectre of death hovering over his shoulder.
Wainscot Weft: The old-school CEO, a for-profit version of Dumbeldore. He remembers when the company invested in people, not machines. Of course, that was back when the trade in people was more lucrative.

Overview
Out of work again, computer geek Sheridan Knock lands his corporate dream job using a joke resume. That dream shatters when he discovers his new office is staffed by monsters and magicians. Now Sheridan must fit in, keep his secret and avoid literal termination. In charge of a misfit mystical tech-support department, he struggles to survive and maintain his cubicle-anonymity. But when Knock's nerd instincts uncover a sorcerous conspiracy he becomes a target. Now he must emerge from the safety of the basement into the boardrooms' bright lights to protect himself, his co-workers and the company itself from a more demonic corporate “take-over.”

Outline
Sheridan Knock discovers his roommate's toyed with his resume- adding his experience as a 63rd level Warlock in an online game. When the new resume nets him a dream position as Database Administrator, the money offered makes him overlook some strange details. Relocated to a secret facility, Knock begins to suspect he made a mistake. On site, he discovers two horrible problems. One, corporate diversity here includes warlocks and vampires, mages and myths. Two, he has to handle tech support.

Quitting isn't an option- his ironclad contract suggests dire consequences for early termination. Knock must learn to navigate the shark-filled waters of his new workplace, balancing arcane office politics and the threat of supernatural mishap while concealing his ignorance of the magical arts. The lassitude and misanthropy of his support team make that job easier. Each member has been consigned to the basement offices of Stygian Level IT support for a reason.

Uninstalling cursed programs and rewiring tentacles takes Sheridan throughout the facility- crossing paths with a computer-illiterate CEO Wizard drowning in nostalgia; an angry ex-girlfriend who may be behind his hiring; her unfortunately attractive best friend, and many others. Doing his best to stay anonymous, he quietly chips away at the immense backlog of support requests- leading him to a strange abandoned workstation in a long--forgotten wing. Knock unfreezes a bizarre program and heads on, his small victory confirming that he's found a role when he can safely hide away.

...But when people start vanishing and turning up dead, Knock sees a pattern connected to the strange program. His investigations put him squarely in the path of Juliana Rath, the fiendish head of Marketing. With the looming threat of a “Performance Review” in the hellish bowels of HR, Knock realizes he has to act and not just hide if he hopes to survive. He pulls together his team through a mixture of threats, flattery and bargaining. With their help he discovers the threat leads to the heart of the company and endangers everyone. With Rath, the Hellhounds of HR, and angry clients all on their tail, Sheridan's team must locate the last terminal housing the rogue program and face the real enemy.

From Here
Knock's victory earns him leadership of a Cross-Functional Vision-Building Work-Team; same people, same office, different duties. Now he'll have to juggle IT support with product development, research, market analysis, and corporate espionage. With the introductory arc done the story opens up to explore a host of questions: What does the company actually make and why doesn't anyone know for sure? Who are their competitors? What goes on in the darkest parts of the facility? When will they pony up for actual certification training?

WE'RE GOING TO NEED YOU TO WORK IN YOUR PAST LIFE
The game's simple- with at-table character creation and easy mechanics. Play splits between planning/setting things up and actually taking direct actions to complete the objectives. PCs departments can grow through the accumulation of magic and non-magic office equipment. Episodes are designed as randomized playbooks so the GM can whip together everything, including NPCs, a relationship map, and places, in about an hour. I'll post more on this in the future.
Posted by Lowell Francis at 12:49 PM