In 1984 I worked at a shitty movie theater. It wasn’t part of a chain, instead family owned and run by a sketchy guy out of Chicago. We had three screens and an arcade you had to go outside and around to get to. We played a lot of Cannon Films (Runaway Train, Masters of the Universe, Invasion USA, Texas Chainsaw Massacre 2). This was before we had multiplexes in our town. When they finally opened a six (!) screen theater, my manager freaked out.

Anyway I had plenty of downtime when I worked. We could get clean up done quickly, check the stock, and wait for any stragglers who wanted more snacks without breaking a sweat. Of course since we were high schoolers we barely did that. We made student minimum wage ($2.85/hour) so there wasn’t a huge incentive to excel. Still I did my job, eventually becoming an assistant manager (and making an additional .25 cents per hour). But sometimes it was seriously boring.

At the time my local rpg group played a ton of Rolemaster. Paul D. handled GMing. I ran other games (supers, James Bond, GURPS). But I wanted to do something with fantasy; I wanted to run Rolemaster. And I also wanted to use elements Paul had brought to our table: The Lythic Pantheon. These deities came from the Harn published setting. They’d released an awesome systemless cultural sourcebook: Gods of Harn. I planned on adapting those gods to a new setting and context- ignoring all the rich work and world building in the supplement. Why? Because I was fifteen and knew better.

Anyway one night after wiping down the counters yet another time, I started writing down notes on a paper towel. Gallerain and Cainsar. Two neighboring kingdoms. This became the basis for a short RM campaign I ran soon after. It ended after a handful of session, but I still liked the world, so I worked on the larger continent. Then still later when I went to run Fantasy GURPS I created another continent on that same world. Eventually that grew into the fantasy world I’d run for another couple of decades over many campaigns. (For a rundown see here).

What’s the point of all that? This weekend in going through  old boxes I found that paper towel. It’s wrinkled, stained, and threadbare but still intact. So I’ve scanned that so I’ll always have this weird artifact. 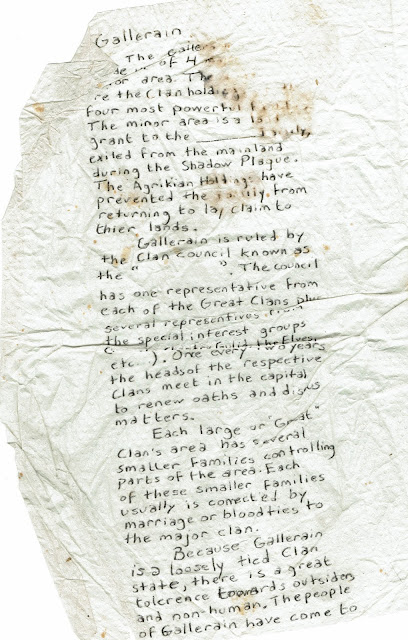 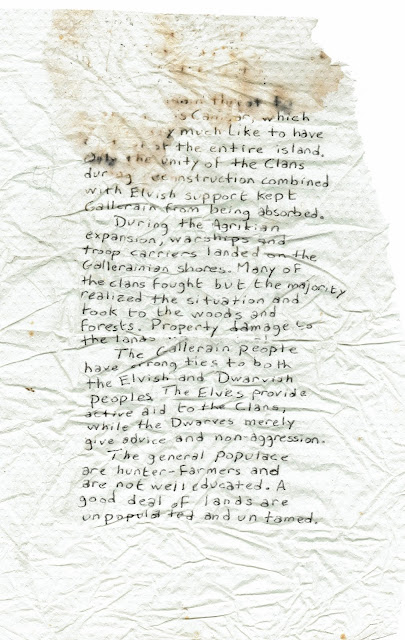