MORE GAMES, MORE GAMES
Several weeks ago Vincent Baker started a conversation on G+ about defining yourself as a game designer. He encouraged everyone to create and consider yourself a designer. In particular he pointed at people who say what you ought to be doing in games. “They're asking you for a favor and they aren't even gracious or self-aware enough to say please.” That phrase stuck with me. James Stuart followed that up by talking about the challenges of unpaid labor as it related to game creation (citing this article about github).

I want to say what I like in games and I want to say please. I smile when I see games hit my particular hang-ups. I also want to break those "likes" into two groups. In the first we have things which may be less labor, time, and effort intensive. They’re about style and information. The second group requires more time and effort. They’re things I dig, but I recognize not all games can do given commitments and energy.

If a game or supplement is of substantial size, I’m more likely to look at it through this lens. Smaller games, niche indie rpgs, truly revolutionary approaches have their own standards. Some of my desires apply to those, but more often not. I’m talking about books with dozens of pages, Kickstarter projects, and anything with a substantial price point (let’s say roughly $3+ maybe higher...I don't know).

Also designers can make deliberately, conscious aesthetic choices to do the opposite of what I say I like. I respect that. If you make an informed choice, having weighed the perils and pitfalls, then cool. Hopefully the reasons for your approach will be clear to your readers. None of this should be taken to say anything game should be condemned. Instead it’s about the guidelines I use to invest my money and time. The latter’s the more precious resource. We live in a golden age of gaming with almost too many excellent options.

BASIC LIKES
Tell Me What We’re Doing
Offer a clear statement of what we’re doing when we play. I like to see that early. It’s one of the first things I look for. Some books just give me a genre statement ("a game of fantasy adventure") or simply describe the setting. But I’d like to know what the play aims towards or supports. If that’s "anything possible" fantasy, then make that claim. Think of it this way, when I go to pitch this to my players, what am I telling them?

I’ve picked up a couple of complete rpgs on Drivethru lately which have super-detailed and rich settings. But I don’t know how we fit into it. I can't figure what kinds of stories we’ll be telling. Maybe they say that later on, but if I don't know in the first chapter or so, I’m less likely to press on or even remember the game later
.
Before You Get Going
Before you launch into a large chunk of game fiction, an overview of the setting’s history, or a complete gazetteer, do that telling I mentioned above. Even if it’s just a couple of paragraphs before we dive in. On the flip side, don’t jump to character creation on page one without giving me any idea of who these characters need to be. . 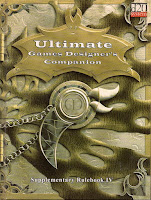 Genre
I love superhero games, I love spy games, I love samurai games—all genres I dig. When I see new games for these I’m going to check them out. But I’m always stumped when all the game tells me is “I’m a steampunk game.” OK, what kind? What’s the difference between you and the dozens of other cog & brass games?

If your game jumps into a crowded genre, maybe tell us what’s new about it. Or say what’s done differently and better. Or even just talk about why you made the game. Even if it’s to only to say that you created something that fit your GMing style, worked with your group, or added a few bits you preferred.I like it best when that discussion’s concrete and specific.

You don't have to know every game in the genre. I’m not saying you have to name and take on the biggest competitors. But you have some reasons you like this game, right? Otherwise you wouldn’t have created and presumably played it. Tell us.

Blurbs
Check your blurbs. Like many people, I get my first impression from back covers or the electronic equivalent: Drivethrurpg product pages. That’s your pitch. That’s the thirty seconds you have to get someone’s attention. I’m less likely to check out games with ambiguous, vague, or generic language there. Maybe you want your game to be enigmatic, with the idea that the reader will be drawn in to figure out what’s going on. That works sometimes, but it has to be super well-written. Some of the best blurbs I’ve seen offer a little bit off mystery, but then have concrete info. They divide that with lines or font choices.

First Impressions
Related to that, really think about if you want boobalicious artwork on your cover. Maybe you’re doing that for a strong purpose; if so, that’s cool. But I’m less likely to buy or support a game that I’d be embarrassed to present to our mixed gender player group. A T&A cover says something to many female players.

What Am I Rolling?
Tell me early on what kind of dice I’ll need- or if I need none. I can’t say how many games I’ve gone through for my History lists that don’t do this. I need to get 100+ pages in to the resolution section to see what they mean by “roll X dice.”

Hacks
If you’re building on an existing system (Savage Worlds, d20, PbtA, Fate), tell us what you’re changing or doing differently. Explain what you’re bringing to the table. If you’re just repurposing it without changes, tell us that too. If you’re changing up basic terms from the original system, please call that out. When I read the Fellowship rpg, it took me a long time to realize that when they were talking about “Overlord Cuts,” they meant “GM Moves.”

BONUS LIKES
Don’t Box Me In
I like open pages. If you’re going to bound the text with lines or art, keep that simple and let the text breathe. It bugs me to read games with completely enclosed box frame pages. Or strong bounding lines on multiple sides of the page. I’m not sure what purpose that serves. Are they crowding the frame to make less text look like more? I recall student papers that did this to pad out page counts. I feel the same way about large, graphically intense, and obtrusive page edge borders. 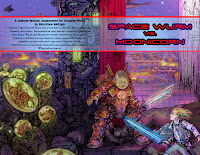 What’s My Background?
Think about why you have repeating graphical element on your pages. If you want greyscale watermarks, background images, color pages, or some combination, have a reason why. What does it add to the text? Does it make it easier to read? Does it help the page hold together visually? Does it complement the overall aesthetic of your product? Then ask yourself, does it make this harder to read? Then ask a bunch of other people if they have a harder time reading. Remember it will appear darker on some readers’ displays or print outs. Does that balance out for you? It might- Space Wurm vs. Moonicorn’s a good example of a success with this.

BUT if you have any of that PLEASE PLEASE PLEASE learn how to use layers when you put your pdf together. Allow readers to turn off those backgrounds for viewing and printing. Some people have visual limitations, some are just old fucks like me. Alternately: offer a printer-friendly version. Seriously, this ought to be a common standard and you can find tutorials about it online.

Wall of Text
I appreciate it when designers break up text, carefully use headers, or offer vital synopses in callout boxes. I have a harder time getting through text which combines small fonts, single columns, and long paragraphs.

Navigating
I can understand not having an index, but there are tools now to make one much more easily. It might not be a great, but it could help. It’s especially necessary if your game is fairly long. I’m more pleased when I see an index than disappointed when one’s missing. That being said, if you have more than a couple of sections give us a table of contents. And one with useful headings rather than fanciful ones. Please.

Pitch Meeting
Think about how a GM’s actually going to translate and convey your game/setting to players. This is vital, but how you handle this varies. Yes, you can have a rich history but perhaps offer a 1-2 page summary. Yes you can have many clans/groups/factions, but perhaps present a quick ref for those somewhere. Figure out what players need to know to play. You’ve probably had to synopsize when you’ve presented the game to others. What did you say? What questions came up in play? Ideally have something a GM can hand out.

Pre-Gens
If appropriate to the game, I love it when I see pre-gen characters. Especially when they’re presented as standard character sheets. If you have printer-friendly versions included or available as downloads somewhere, that’s awesome.

Getting Rolling
If appropriate to the game I love it when I see quickstart or sample adventures. They’re hard, they’re work, but they’re useful to demoing the game to a new group. They don’t fit for every game. But even if you have an rpg with a more flexible approach, perhaps point the GM to some good starting places or fronts. My favorite quick-starts introduce concepts and rules in stages, like a good video game tutorial.

Diverse Art
Not all games have art. And sometimes you have to rely on creative commons or stock art. That’s cool. That being said, when a game has art and I see an effort has been made to have diverse characters presented, I appreciate that. Different ethnicities and cultures, various body types, women in positions of strength, etc. I’ve seen many games where all the women have to be sexy-times and the men get to look interesting and distinct. I like it when a game changes that up.

One-Page Character Sheet
Completely a personal preference. And a higher-level design issue. But I’m much more sympathetic to games where characters fit on one side of a single page, without being in microscopic font. YRMV.

Initial starting sounds
This is a stupid one. But it’s something that bothers me. If you have a small pool of key terms (attributes, skills) consider varying the initial sounds of them. I’m always weirdly disconcerted when I hit a list of six characteristics and three of them start with “S” (Strength, Stamina, Social). They don’t all have to begin with different letters, but think about breaking that up, if only to make abbreviations easier.

Thoughts? Other Likes I Missed?
Games I'm Thankful For: A Companion List
Posted by Lowell Francis at 4:45 PM