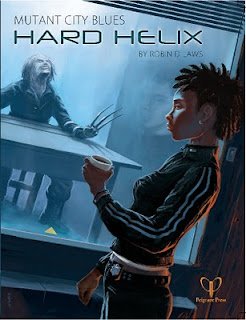 I’m planning what to run for TGIT Gauntlet Hangouts in April. I’m debating between Kuro and Tenra Bansho Zero on one hand; on the other I want to do a GUMSHOE game. As I’ve talked about, I dig that system but it hasn’t gone over with groups I’ve run for. I’ve noticed a few trends in responses to GUMSHOE. Some folks who haven’t played it criticize its approach to clues and the perceived “lack of challenge.” But those who have played and didn’t dig it often comment on the complexity of the “skill” lists and tracking required.

So I thought I’d try a slimmed down approach with one of my favorite settings, Mutant City Blues. It’s probably the GUMSHOE game which has gotten the least love and attention. In it you play members of the Heightened Crimes Investigation Unit: super-powered cops for super-powered criminals. MCB has some great tech, including the Quade Diagram, which allows players to draw inferences from power-use evidence.

My approach requires a few changes, especially to investigative abilities. First, we cut down that list by at least half. I’m reducing each of the three categories to six abilities. Second, we use a variation on the Cthulhu Confidential mechanics. Each investigative category has a pool of points. Players make spends from a pool if they have any of the abilities listed. Ideally on the sheet, abilities they possess will be in bold and those they don’t will be greyed out. That way they can see the range, but know quickly which they have. Third, investigative powers will be associated with one of the categories and its pool of points. Fourth, we’ll reduce the number of investigation ability points to one-half or one-third.

On the non-investigative side we’ll trim the general ability list a little. We’ll move Health and Stability values to a different place on the sheet. They should look a little more like “Hit Points” to make their break from the other abilities clear. I’ll also probably set that, except for special cases, the GM declares difficulty before players roll and spend for a general check. I may also say that if they just hit the difficulty, that’s a success with cost. Otherwise they get what they want. We’ll keep the default system which has a rating for each ability.

I’ll obviously have to go through the Powers to see if this screws any of those up. I’ll put translated and slimmed down versions of the powers on the PC’s sheets. 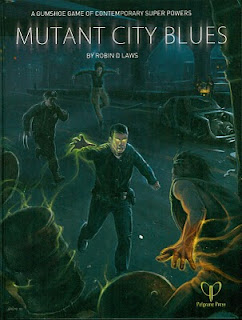 The default list of Investigative abilities in MCB is:


General Abilities won’t change as much. The standard list has: Athletics, Driving, Filch, Health, Infiltration, Mechanics, Medic, Preparedness, Scuffling, Sense Trouble, Shooting, Stability, and Surveillance. If we pull Health & Stability out, we have 11 abilities. We might fold Sense Trouble & Surveillance into a perception-type abilities. I could pull the security tech elements out of Infiltration and fold them in with mechanics to make a “Technology” skill, though I’d need another name. The stealth elements from Infiltration and Surveillance could be added to Filch to make a general Thief or Sneak ability. That would get us: Athletics, Driving, Medic, “Perception,” Preparedness, Scuffling, Shooting, “Technology,” and ”Thief.” I’d need better names for those.

I may go into one of the GUMSHOE sheets on Roll20 to see if I can make a version which supports this.

Good? Bad? Indifferent? Am I reinventing the wheel?
Posted by Lowell Francis at 2:34 PM