Big goofy role-playing week-- very much looking forward to it-- Libri Vidicos with some guest stars on Friday, FWAP supers on Saturday, and possibly a slightly experimental one-shot on Saturday evening. Been working on that. All that plus there's the new Neko Case album. That doesn't have anything to do with rpgs, unless you count the cosplay.

Sunday had a delightful bout of insomnia that kept me up until 5:30 a.m.-- Daylight Savings Time hasn't helped and even with not drinking any coffee after dinnertime, my sleep schedule has been a mess. My problem with the sleeplessness comes from the lack of productivity-- if I could turn those hours into something useful, I'd be happier. But usually it's just an extended period of unfocused anxiety where I can get anything done. Of course being up that late Sunday night resulted in a Monday collapse which blew that day away. I did manage to get a few emails done yesterday and some work done on the supers game, but not as much as I'd hoped. I'd kind of schedule my week up pretty tightly so today I'm re-penciling things. So probably lighter blogging entries this week. 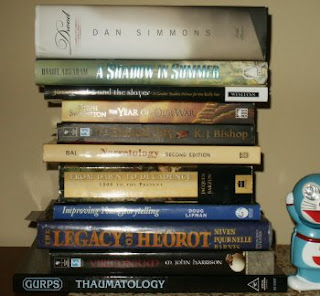 Sincerely Imitative Flattery
Kaiju posted a picture and a run down of the various books he was in the middle of. Like me (and I suspect everyone) he's in the middle of a bunch of books at the same time. These are the books I'm working on that I'm pretty sure that I will actually finish at some point.

Drood (Dan Simmons) Interesting so far, but I'm a little nervous about the size of the book. The question is can he sustain the atmosphere and tension for that long. I remember his Carrion Comfort starting out strong but then stumbling and ending up more like a strange Tom Clancy novel.

A Shadow in Summer (Daniel Abraham) I picked this up some time back at the remaindered bookstore. It has some interesting fantasy concepts that keep me reading, but it is also part of a set of four books. I'll probably read bits and pieces until at least the next two are out and available. I got burned by The Name of the Wind for series you enjoy but the rest aren't out yet. It does suffer a little from the fantasy writer's desire to have a variety of obscure terms and titles you have to keep straight which makes putting it down and picking it up a little problematic.

Sex and the Slayer: A Gender Studies Primer for the Buffy Fan (Lorna Jowett) Just started this-- a gift from H & B. Interesting in that I'm always concerned about gender issues as they relate to the fantastic. Curious to go back and look at the treatment of like issues in Watchmen on-screen versus original.

The Year of Our War (Steph Swainston) One of the authors for the “New Weird”-- reading that anthology a while ago made me decide to go back to this. Every time I do, I have to start again from the beginning. The author deliberately provides a disjointed and possibly unreliable view of the setting early on. I ought to be more grabbed by it-- I am just enough to keep going, but I hope at least a little of the payoff comes soon.

The Etched City (K.J. Bishop) A book lent to me by Lil' Devilbird some time back (um...before the fire...yeowtch). I'm still working through it-- I have the sense that things shift here. The author's also placed among the authors of the New Weird, but the story presented in the anthology wasn't too fantastic. Still, I want to get through it (and return it).

Narratology (Mieke Bal) The remaindered bookstore used to have a great section of academic books, but they've apparently dismantled that. They have a few scattered in other sections now. I found this there. It is a more Lit Crit approach to breaking down the narrative elements of a text: a method for defining analysis rather than analysis itself. I was hoping for something more useful, but I'm determined to get further in before I give up.

From Dawn to Decadence: 1500 to the Present: 500 Years of Western Cultural Life (Jacques Barzun) One of those monster tomes that I read a section of here and there as the feeling grips me. I love these kinds of cultural history books as they provide rich material for games. These are the kinds of ideas-- rather than tales of military history or swift overviews-- that can give a gamemaster nice crunchy material to flesh out places and people in the game.

Improving Your Storytelling (Doug Lipman) I was hoping for some insights on oral presentation. Or perhaps even on the structures of stories. There's some interesting bits here and there, but I think it is more for Cowboy Poets and the like. Still, I spent money on it and I ought to find something here.

The Legacy of Heorot (Niven, Pournelle, Barnes) Lent to me by B-- has a very old-school feeling to it. Clearly going to move to survival horror combined with classic sci-fi.

Viriconium (M. John Harrison) I mentioned this before, a gift from Kaiju. Strange and wonderful-- especially as you get to the later places.

Gurps Thaumatology (Phil Masters et al) Cements my hatred for Gurps Magic. I've been thinking of game systems being like programming languages or operating systems. Gurps is for those people who want to get into the command prompt line or see all of the code behind the program. On the other hand, I prefer (these days) to see the GM as a GUI-- the players press buttons and see what happens. They don't have to worry about the mechanics behind the scenes. Still, despite all of that, I'm (again) determined to at least skim this puppy to see if I can find anything useful here. I spent money on it. I want to get something out of it (unlike the Anima rpg...ugh).
Posted by Lowell Francis at 10:29 AM