High incomprehensibility today-- just some sketch notes on a board game design I thought I'd post. Very rough-- just realized about the core mechanic yesterday and I've been thinking about how to apply it. So a little scattershot here:

Board itself is divided into six areas. Each area has a space for actions to be placed, an influence track, and a score level. The influence track works a little differently than in other games. It is a circle, with ten segments. Segment ten has a red arrow in it facing backwards. In each scoring round, players will gain points for each of these areas. Whoever is closest to-- but not past-- the red arrow will gain the points for the area. If players both have markers at the same influence level in an area whoever placed last (the marker on top) has priority. 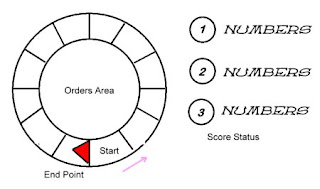 Players begin with a set of basic orders, or actions. Orders are labeled on one side of disks. The backs of the disks are identical. I'm working with poker chips and wooden disks from the Bottle-Topps game for my thinking about this. So each player has a set they can look at, with their color and the particular order marked on one side. Players begin with the five basic orders, but during the course of the game can gain additional actions for their pool.

Gameplay:
Beginning with the starting player, each player places two order tokens on the board, face down. These can be placed in any area and may be placed on top of previously placed order tokens (including a player's own). Once placed, no player may look at the tokens until resolution. After all players have placed two tokens, each will place two more in the same manner.

Once all order tokens have been placed, each player (again beginning with the starting player) will pick one face down token at the top of a stack, and draw it. The player who originally placed the token (which will be shown on the face down side along with the order/action itself) now carries out that action.

The point of this is you're never sure when your actions are going to be revealed, you're not sure what impact the actions of other players will have on you, and if an action is buried, you know that you might not get to it for some time. You also have to remember where you placed your actions.

After all actions have been resolved, you score out the areas based on which player has the control marker closest to the red arrow without passing it. It may be that you don't need a scoring round after every placement and execution round-- it might be better to have that happen at certain intervals. After that starting player passes to the person on the left.

Players may add to their available pool of actions with up to ten others in the course of the game. Some, more potent actions are one use-- meaning that they can be placed once and then removed from the game. These actions will be one differently colored tiles or chips, so players will know they are more powerful but still not be certain of what they are. There are five of these. The other five actions go into your pool and can be used from turn to turn.

Bonus Tracks
There are two bonus tracks on the board, each with three squares. When players execute any of the bonus track actions, they place tokens here. After action resolution but before scoring, players take their bonuses from these areas. The three tracks are:

Special Actions: Players who place tokens here may choose one of several options. Even if they place more than one token here, they may only take any option once.
*Increase the Score Track in one area by one (up to three)
*May place an additional action token in the next round
*May regain one previously used one-shot action

****
Anyway, just what I have in my head right now. I still have to do minor tweaks to the "Succession" game and more major tweaks to my Witless Minions game.
Posted by Lowell Francis at 1:47 PM

Email ThisBlogThis!Share to TwitterShare to FacebookShare to Pinterest
Labels: board games