Changeling the Lost as a Lens of Horror 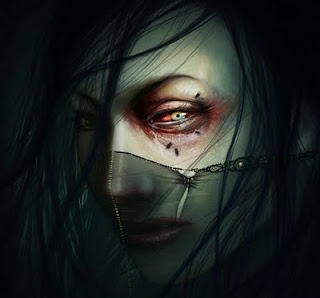 I read a blog post a while ago that suggested modern horror, in movies and in games, had rendered some of the classic movie monsters and images less scary. Vampires and werewolves had been made less scary by their co-optation into things like Twilight, various animes and such. This came out of an interview with Alan Moore which talked about the reuse and decline of those images. Essentially horrors had been made more comfortable and palatable, which also hid some of the really rough edges and implications. You can read the essay here. I think a case could certainly be made, in the form of some identification, that some tabletop horror games in which you play the monsters might also create that effect.

On the other hand, things actually become more awful seen through the lens of Changeling the Lost. In Changeling, people are stolen or tricked from the real world into the realm of the Keepers. In these private worlds, the Keepers enact stories involving their new pets- some of these may simply be realms for the adulation and entertainment of the Keeper, but others may have more sinister approaches- subtle, twisted and awful. Think the brutal awfulness on both side in Pan’s Labyrinth. Time under a Keeper in the Hedge is called a durance, and it is that experience which changes and reshapes the changeling. We were watching Coraline the other day, a scary kids film. Watched from the perspective of a changeling, it becomes an even more terrifying film. In some ways it would be the ultimate horror movie as they see the main character break rules and get seduced over. What was just slightly creepy would probably make a changeling catatonic.

With that in mind, I watch some other things that- if imagined to actually be Changeling elements- would be even more awful. On Netflix they had the film Pufnstuf based on the Saturday morning cartoon H.R. Pufnstuf. I watched the first little bit of that film. Basically a young boy whose family has moved him to a new town finds himself isolated and ostracized. He wanders off into the woods. When he throws down his flute because he’s been kicked out of the band, it comes to life and begins talking to him. It promises to be his friend, says that it will show him new places and new adventures. Then it leads him to a lake, where it encourages the boy to board a talking boat which will sail him to a new place where he can have great adventures…

…at that point I stopped watching. I didn’t want to see him sail off into the Hedge, to be chained up and made into some kind of Wizened Musician.

Seemingly innocent video games can also be read as Changeling durances. In Nintendo's Animal Crossing, you find yourself aboard a train with no real memory of the past. You appear to be the only “human” in a land of animals. You arrive in a new town and find yourself immediately put to work by the Overseer Tom Nook. You whole existence then becomes serving Nook, trying to pay off your debt. You have friends in the town, but from time to time, they mysteriously “move away” new to be seen again. New ones arrive and simply move into their houses. Or consider the Harvest Moon video game series, which begins with an amnesiac protagonist arriving at or washing up on the shore of a village. The heroes taken in and put to work- now they must serve at the behest of the Harvest Goddess. In the case of the most recent harvest Moon, the character put find a way to break the seals on five magic bells…for the harvest Goddess cannot truly come into her power until you have done so. She needs you to release her…nothing to worry about, it is just farming, there’s nothing sinister there. Why was she sealed away? Shhhhh…just water your crops and pray for the silence of the night…

Take a moment to think about other stories which could easily actually be Changeling durances with just a little twist...where some arrives without memory or gets told they're special and have to come away or manages to escape from the real world...

Contracts of the Urn

The Contracts of the Urn deal primarily with containment for preservation or transformation. Elementals have a strong affinity to these contracts due to their unique understanding of the “stuff” of the world and its boundaries—but the ideals of the Urn hark back to the beginning of agriculture among humankind. The highest level of these contracts are most often used for Hedgespun creations, especially when it is something of the mundane world that needs to be carried into the Hedge intact. Note that the terms substance and contents are used very carefully—substances are single identity homogeneous things like acid, water, or wine (and maybe soup); contents can be anything—a birthday cake complete with candles, a collection of random nuts and bolts, or the components for a slow-acting or triggered chemical reaction.

Changeling may scribe a universal rune for urn on any container and gain some knowledge of it's contents. The extent of the knowledge gained depends on the Changeling's familiarity with said contents—but the least knowledge gained will be some sensory impression of the contents if used or ingested as intended. All other Changelings who see the rune later will gain similar impressions (appropriate to their own level of familiarity) unless the rune is destroyed. A Changeling inscribing this rune on a container that they themselves have filled has complete recall of the contents and the date and circumstances of it's storing.

Catch: Changeling scribes rune in some permanent manner on a container they themselves are sealing.

The Bounds of Containment (••)

Changeling gains deep insight into the ideal container for the given set of contents, having a near perfect intuition for the materials that are best used, the most effective methods of sealing and the ramifications of any compromises they use. Range of options presented is deeply related to experience, Seeming, talents, skills and available resources—hence over time this contract becomes more effective and more rarefied for any given Changeling.

Catch: Changeling uses the Contract for a substance he/she had previously used it on, but with the intent of reconsidering in light of new resources, experiences or skills.

Changeling may alter any vessel to become an airtight, leak-proof container of any mundane substance. This contract may also be used to improve the performance of a container, so that a thermos or cooler, for instance, keep the contents hot or cold indefinitely. So long as the chosen vessel is not purposely opened, it will continue to function in this way. Hence, a Changeling can store a gallon of acid in a folded newspaper, if he cares to. However, substance stored is not protected from effects of temperature or it's own instability unless vessel is inherently capable of this in some manner. Volume of substance stored can be no greater than what the Changeling could carry unassisted.

Changeling may speed, slow or halt a natural transformation taking place on the contents of a given container. Perfect preservation, controlled fermentation or even sped up distillation or dessication lie within the demesne of this Contract. The effect may last for up to one cycle of the moon (hence, perfect preservation beyond the first month must be maintained) but will only affect one batch of contents. Container need not be sealed (many transformations require air or other situations that are not amenable to sealing.) Natural transformations are those that would occur over time albeit much more slowly or swiftly or inefficiently if the contents were left in said container in the conditions under which the Contract is invoked.

Catch: Changeling is using an opaque container (one in which he/she cannot see into) that has been used naturally (without this Contract) for this process previously.

With proper attention to the sympathies and the symbolism of the act, a Changeling may capture and store anything within the appropriate container—even abstract ideas, mystical energies or dream imagery. The logistics of collecting the contents are outside the scope of this Contract, but the ability to contain them, at least for a time, are assured. Thoughtful and extensive use of The Bounds of Containment is highly recommended.

Catch: Changeling is capturing some essence of his own self

Image from the deviantart gallery of James Wolf and can be found here.

Posted by Lowell Francis at 8:22 AM