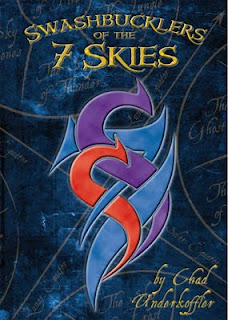 As a little bit of a cheat (we call it efficiency) I’ve decided to review Swashbucklers of the 7 Skies (S7S). Last week I reviewed Zorcerer of Zo (ZoZ), which uses the same PDQ (Prose Descriptive Qualities) system. ZoZ takes the lightest possible approach to those rules, while S7S has a little bit more crunch added to it. Atomic Sock Monkey also uses PDQ for the well-praised Truth and Justice; Monkey, Ninja, Pirate, Robot: the RPG; and Dead Inside. I picked up S7S as source material for my own fantasy, flying ships, Battlestar Galactica homage (see here). I also bought Sundered Skies at the same time and I think a useful comparison can be drawn between them. S7S is a pirate rpg with flying ships and some light fantasy. Sundered Skies is a high fantasy rpg with flying ships.

The Book Itself
Swashbucklers of the 7 Skies comes in a slightly oversized trade format, clocking in at about 328 pages (including adverts and such). That’s "7" skies and not "Seven" if you’re doing a search on it. The color cover has a nice iconic illustration, with a classical map tone background. The art throughout is simple and clean- some original pieces, some clipart, some nice Dover choices, and a rich set of symbol graphics associated with the magic of the game. Readers can breeze through the text thanks to the excellent and clean layout. Even those sections with a greyed background remain highly legible. S7S avoids my pet peeve in book design and sticks to no more than three fonts, with one of those reserved for really special moments.

Setting
Swashbucklers takes place in a domed world, a fantastic land encased by the borders of the celestial sphere. At the center of the dome stands the Sky of Fire, like the core of an apple reaching from the top to the bottom. The apex of the dome is unreachable, while the bottom of the sphere is a sea of roiling "Blue," like azure tar. Between those levels, the sky is broken into layers, with winds moving in different directions within the layers. More importantly, the dome is sectioned into six further skies, slices running from top to bottom. These remain set in relation to one another, but cycle counter-clockwise around. Each has a distinct character, so they serve as "seasons" for the fixed floating islands and locations around the world. Navigators of the flying fleets learn the best passages and routes through these skies. The six are The Mists, The Sky of Frost, The Ghost Sky, The Sky of Stones, The Sky of Thunder, and The Jungle Sky. So, along with the blazing Sky of Fire in the center, you get seven.

The cosmology of this is very cool. The book spends the first 130 pages setting up the background, environment, peoples, and cultures. If you’re looking for an existing sky-borne setting to play in, this one holds together. If you’re just looking for inspiration, you’ll find a great deal here. Chad Underkoffler provides enough detail, for example, about each of the Skies to make them feel distinct and interesting. I found myself making notes as I read through- ideas for adventures in each one. His treatment presents the physical features, flora and fauna of each well. The tone here is light and deft- this isn’t a grim and gritty world and the mythic is presented as a kind of legendary background, with it mostly appearing as lore and superstitions in the minds of the inhabitants.

After two dozen pages of geography and background, the author takes us through the various kingdoms of the world. These have quite divergent approaches- and don’t simply echo classical western tropes. 7th Sea did a good job of converting European pseudo-cultures into a new fantasy world. S7S does a little of that, but for the most part stakes out its own territory. Each kingdom feels unique and interesting; with some exceptions I could easily imagine PCs from those places. The writing does a good job presenting what you need to know to play or run these areas: people, cultural details, what’s going on now, etc. They fit together into a whole, something some setting books fail at. This section takes up 50+ pages. The next treats magic and the faithful, a nice set of ideas and structures consistent with the setting and convey a different feel from other games. I’d recommend these ideas for GMs looking for a basic structure to bring over to another fantasy game. That takes up about 20 pages. The last section, just shy of 30 pages, covers the ships, equipment and trade of the setting.

The System
At about the halfway mark of the book, we finally get to the mechanics, beginning with character creation. That’s an interesting approach. I’m used to games giving background first, but Underkoffler really sets the stage before presenting any kind of mechanical details.

PDQ intends to be simple, lighter than FATE or Savage Worlds. It aspires to a narrative focus as the former does, and adaptability as the latter does. There aren’t a lot of details, knobs and dials needed to adapt PDQ to another genre or setting. FATE, on the other hand, requires more work depending on the distance from your reference game (Diaspora, SoTC, Dresden). PDQ is a low detail, high trust system- relying on the players to exert control and structure. My biases lean in that direction- not for any specific game/system, but that in the last decade our group has moved towards transparent and simple systems with greater shared authority.

Fortes
PDQ in S7S operates with a basic 2d6 roll for tests, with that roll being modified by the rating of the "Fortes" characters use. In other PDQ games these are called Qualities. For each Forte the player selects a descriptive word or phrase in character creation. If a task fits with that descriptor, the player gains a bonus to the roll. This bonus depends on the level of the Forte. The GM has to serve as an arbiter during character creation as to whether a Forte is too narrow or broad.

Fortes cover everything; characters have no stats. Skills, abilities, traits, tools, magic, gifts, characteristics, advantages, etc.- all of these fall under Fortes. FATE and Hero Quest take similar universal approaches. Each Forte has a level, ranging from Poor to Master that give an increasing bonus. These level names are also used for difficulties (an Expert task requires 11+) but difficulties can reach higher, with Inconceivable! at the top (21+). Anything outside of a character’s Fortes is rolled as Average, with no bonus to the roll. S7S also offers characters a Swashbuckler Forte which gives them a discount on techniques associated with that Forte. Techniques can describe a situation or aspect of that Forte. These can be used to affect a reroll or add a +1 bonus. The game also offers Foibles, flaws players the GM can use to explain failures and increase drama. The rules present a number of example Fortes for the setting with discussion of their place and role in the setting. These also define how to purchase gifts and magical abilities.

A few other mechanics are worth detailing. S7S uses Style dice which players can gain through good play. The rules offer an interesting approach to doling out and balancing those. Most challenges and tasks are abstract, but the book spends time talking about many examples and cases. This is well written and clear. Players narrate victory if they win, the GM if they lose. The rules offer mechanics for duels, damage measured as Fortes reduction, and handling vehicular duels. That’s basically it- with some additional complications for direct conflicts, combat, damage and the like. It is a simple and abstract system based on a clear and quick mechanic.

Character creation and rules take up a little under 120 pages of the rules. Going through them again, I’m struck by the PDQ system’s ability to simply add crunch without it feeling overwhelming. The system is sound and complete but not thin. You could easily get these rules down in a session or two of play and not really need to refer to the book after that. It offers simple, consistent mechanics which can easily be adapted on the fly. S7S ends with 70 pages of GM advice, most of it generic but some of it aimed at running PDQ and S7S in specific. This reads well and there were at least a couple of points there which made me stop and think about how to apply those to my own GMing.

Overall
I consider this a solid and worthwhile purchase for my needs. I was looking for ideas I could borrow or use in my Skyships campaign. I found that here. But I was also struck by how well this setting holds together. If someone were to ask for a Swashbuckling game, I might go for this one, rather than Lace & Steel or 7th Sea. I has the advantage of some light fantasy and very easy to grasp, teach and adapt mechanics. I enjoyed reading it and it sparked a lot of ideas.

Portability
It would be really easy to adapt this setting to another system. The simplicity of the mechanics means that disentangling them would be a snap. On the flip side, PDQ is a highly adaptable system. I could easily imagine using it for another genre. It wouldn’t be my first system of choice for a long-term campaign, but it would be for a pick-up game or short (6 session or less) campaign.
Posted by Lowell Francis at 8:35 PM