Our Miniatures Painting Vacation: The Results

WHAT I DID ON MY PAINTING VACATION
I skipped posting for a couple of weeks planned and unplanned. Originally I was going simply skip for our vacation. However, the week before I was selected for jury duty. Then after that finished, my young nephew stopped by just long enough to infect me with a horrible, blackout-inducing stomach flu that caught me bad for four days and then took my wife, Sherri, down for a couple more. I'm not good at being sick.

More importantly, and more game related, we finally recovered enough to be able to take our vacation (although with a couple of days cut out or reduced). Our plan was to simply stay around the house and paint miniatures. That had been something we'd done pretty regularly before the house fire several years ago. The fire took all of our carefully acquired paints, brushes, and other supplies. We lost things like classic Armory Paints for Brass and Chestnut we couldn't replace. When we replaced things after the fire, painting supplies ended up far down on the list of priorities. We fixed and replaced other more important things. This year, however, we took a chunk of our tax refund and put it towards that. We eventually have a Reaper Bones KS coming, so we will have a ton of new figures to paint. Not that we have any shortage right now.

We spent about a month watching various painting videos on YouTube, especially those Dr. Faust's Painting Clinic and the series Buypainted.com. We assembled a full list of everything we'd need: colors, brushes, files, pinning tools, flocking, lamps, etc. We ordered and got things together and finally sat down and started to paint. We went pretty much Saturday to Saturday, with two tables set up in the front room of the house. I was a little cold, which made some of the priming I had to do a little difficult. But most of what we'd planned on painting we already had ready from long before.

Anyway, here are some shots of my favorite things Sherri painted: 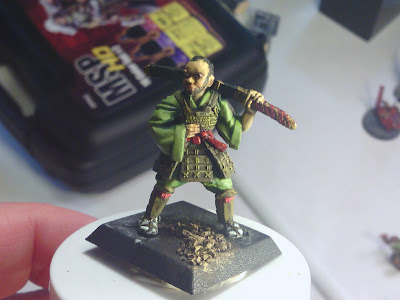 1. Sherri painted four samurai for our L5R campaign. This is a shot of Alan's character, a former ronin. Sherri also painted her own character; Jacque's Kuni Witch Hunter; and the group's daimyo. Sherri did amazing work with the cloth and the faces. 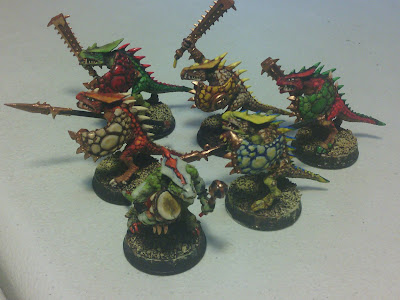 2. Six Lizardmen (from WHFB) she painted. They look awesome, especially the shields. Since we mostly use figures for RPGs, she went to the trouble of painting each with a distinct color scheme. 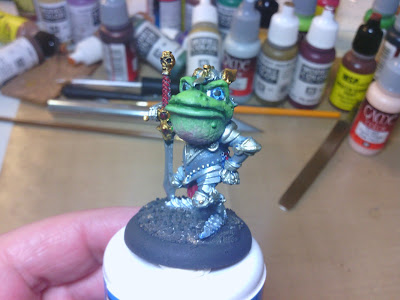 3. The Frog Knight from Dark Sword Miniatures' line of anthropomorphic animals. The picture doesn't do justice to the coloring she managed below the figure's chin/throat.

Here are my favorite three things I painted this week: 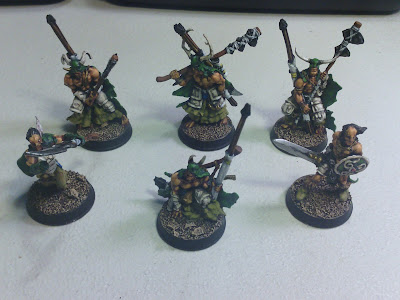 1. I ended up painting eleven Barbarians from Confrontation's old metal line. I was pretty pleased with how they came out- the colors actually worked. I like the flesh tone I managed to come up with. 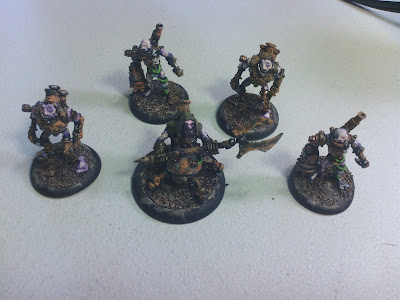 2. Five Cryx 'things' from the Warmachine line. I wanted to have some steampunk/robotic undead and these fit the bill. The rust effects came out really well on them. 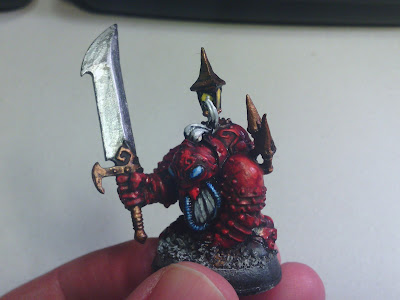 3. I also painted a set of five Steam Dwarves from Confrontation's metal line. The detailing on them came out much better than I'd hoped. 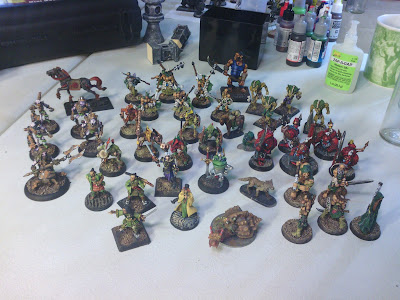 Here's a shot of everything we managed to paint over the course of the week: six Lizardmen, four samurai, one Frog Knight, one Elf Warrior, five Steam Dwarves, eleven Barbarians, four Minor Oni, one Ogre Magi, five Cryx things, two horses, one wolf, one Deep One, and one Dragonsnail from Runequest.
Posted by Lowell Francis at 3:19 PM