Five Game Ideas: On the Drawing Board

In the early heyday of CCGs when everyone and their brother's company tried to make a collectible game, you could count on at least one person in our large and extended group to try out each game. We had brief dalliances with early Netrunner, Over the Edge, first edition Legend of the Five Rings, Dragon Storm, Illuminati, Doom Trooper, Wyvern, Heresy, Kult, Shadowfist, Mythos, and Jyhad. Some hit for a little while and others had some legs. Some clicked with the group and everyone bought into it right away...as happened with Blood Wars.

This was TSR's other CCG besides the pretty bad Spellfire. Most of us picked it up because we really loved the art work and concept of Planescape. Plus the decks were reasonably priced and TSR pumped out the expansions quickly. Many bought a ton of it before even playing  the game. But eventually they did and realized how bad it was. Not terrible- just not good, at least in two-player. Multi-player was another story. Blood Wars let players dogpile on the leader. The moment anyone got slightly ahead of the pack, they were smacked down and the game effectively reset. I remember playing a single game an entire afternoon before we just quit.

Anyway, I ended up with many of those cards. They're somewhere in the house. When I took peoples' various extras I had an idea: perhaps the cards could be reworked and a new rules set built to accommodate them. Perhaps an all-in-one stack game like INWO? I spent some time thinking about it and then put it aside. But today something occurred to me and now I have to root around and find those cards. Perhaps I could come up with a way to make Blood Wars into a deckbuilder. I'd need to go through an isolate which cards I have multiples off and then look at the keywords and numbers on them. It could be a fun project and a chance to look at that amazing Planescape artwork.

IMPERIAL GLADIATORIAL FEDERATION
For the recent superheroes game I ended up doing some research on Pro Wrestling. That had never been my cup of tea growing up, despite having a neighbor that worked the Chicago circuit. But I'll admit I was intrigued by the spectacle of it- and I used some of what I saw for a Luchador arc in the campaign. As well I picked up a copy of Eternal Contenders on a whim. I've only gotten a little ways into it. I'm a fan of video game fighters- though I'm terrible. But I love weird back stories like those for Soul Calibur and Mace: The Dark Age.

Anyway I started thinking about WWE characters aren't really like modern-day gladiators. There's some risk, but the gladiatorial contests of Rome and most fantasy settings have real lethality and risk. But gladiators are stars- they can be celebrities. But in order to do that they have to survive. So I've been thinking about what gladiators as WWE-style characters and celebrities might look like in a campaign with magic, especially with healing magic. Those who do well and enjoy the favor of the crowd, fans, and their management can spend money on restoration and recovery. It becomes an engine to keep people alive- perhaps with some Frankenstien-like effects. Actual magic in the arena would be forbidden, and perhaps there could be an alchemical doping scandal. Healing would have to be rare and expensive- and only take care of physical injuries (so infection and illness would be a real danger). Gladiators who don't seem to feel the pain- perhaps from too many healing bouts would lose the crowd's approval.

Not sure what i want to do with that- might make a nice background detail or plot for a fantasy setting. Perhaps just a setting for EC.

REVERSE ENGINE
I love board games and the last couple of weeks I've been able to play some cool new ones. One classic kind of BG, usually Eurogames, has you slowly developing and building your "victory point engines" in order to most efficiently generate points by the end of the game. Caylus and Agricola would be good examples of these. Even Dominion operates a little bit like that as well. There's a pleasure to that kind of crafted efficiency.

I'm wondering if you could do a game that does exactly the opposite. You begin the game with a solid engine, but then events occur and you have to figure out how to deal with the problems. Units get lost, sub-systems break or redirect. You'd be trying to get the best patches in place and figure out contingency approaches. I think it could be interesting- especially if you could make the game move fast. Players don't like negative events and this would be a downhill run. Perhaps a card based game? Not sure.

BOARDPUNK
This past weekend we recorded a couple of upcoming episodes for our podcast Play on Target. In one segment we talked about games we no longer play. Cyberpunk popped up and stuck in my head. I never ran it- except as a Watchmen-style superhero game. But my late friend Barry ran quite a bit of it and some people really loved it. Strangely no one in our group played Shadowrun, CP’s strange step-child. I did enjoy Cyberpunk, but mostly when we were on directed an specific jobs- with set goals and obstacles. However those often ended up being the least satisfying for Netrunners who ended up sitting on their hands- at least as Barry ran it. He never got the balance between the two right.

I think a pseudo-rpg boardgame using some form of Cyberpunk could be pretty cool. Think of Descent, Warhammer Quest, Fury of Dracula or other games which pit the most of the players against a single adversary serving as the GM. The “Administrator” would have a limited set of resources to put against the group- tricks, traps, ICE, distractions, and the like. Each player would have a role- Fixer, Street Samurai, Netrunner, etc with different abilities and resources. The actual operation wouldn’t be gridded or tactical (like minis moving on a building map), but would be abstracted with locations. These could be built by random cards on a board, with the Admin able to shift things a little. There might be some set scenarios with different goals and perhaps some agendas for additional VPs. 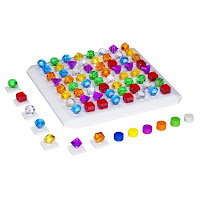 The Netrunner would be playing a slightly different game- or at least one operating under different rules. They would be using their rig and mods to assist the group or change things around. You could do that with card play or something more interesting. I think a variation based on Bejeweled could be neat. Imagine a Boggle board with d6s of different colors. The runner would use his programs to match and remove elements from the board or shift things around. Doing so would allow the Netrunner special actions. Failures or leaving things open for the Admin could result in damage to their rig or themselves.

CENTAURI 7
I want reskin the boardgame 7 Wonders to Sid Meier’s Alpha Centauri. I think it could easily work. Each player would have a different faction with slightly different rules and benefits. Secret Projects could appear in each of the ages- operating like Leaders or Cities from the expansions. Importantly you’ve have military force, but also Green Technologies. Essentially polluting technologies could affect a Planet timer- potentially triggering events. Different end game conditions (World Council, Enlightenment, Military) could change how things get scored at the end of the game. I don’t think it would be that hard to do and make it feel pretty different from 7 Wonders.
Posted by Lowell Francis at 4:07 PM