As I mentioned in a post last week, I hunted around for the stacks and stacks of Blood Wars cards I had laying around the house. However, as with many things, I remembered them from before the fire. It looks like those ended up caught in the blaze and destroyed or thrown out by the restoration people. It doesn't surprise me- but for some reason I thought I'd seen them since then- a trick of memory. I did find chunks of other CCGs fallen to the wayside: L5R from the first five years before the Olympics made them change their logo; tons of 7th Sea which I played a couple of times before realizing I didn't care for it; and of course Over the Edge which I really need to organize and sort. That's a fun game with lane-based mechanics that could be the model for something else. But no Blood Wars.

OOH I did find most of my INWO aka Illuminati New World Order ccg collection. Some of it had clearly been destroyed, but the majority remained. Besides Jyhad, this was the CCG I played the most. We had a good, solid group who gamed regularly. Most had played the original Illuminati board game and enjoyed the new version even more. When SJG licensed a German-language version of the game, we got ahold of boxes of that since it had a few new cards (albeit in German). We bought a good deal of Assassins as well, but the distribution of rarities in that really frustrated everyone. Eventually, as with all CCGs, interest flagged and we went on to other games.

Before that collapse, we played weekly trying out new things. Then someone, I believe Ken McCoy, suggested making up new cards for the game. Everyone would make up a new card and before a session, we'd throw them into the middle of the ring and pick one at random. That kept anyone from making a truly killer card- it might fall into the hands of someone else (as one player learned quite quickly). You kept any cards you drew- and if you stole them through any means during play, you kept them. Several months after we started doing this, SJG actually came out with blank cards- so we didn't have to use stickers and spray glue. Hunting through my cards I came across five of the homemade ones I'd ended up with. Several I made ended up elsewhere (Puss-in-Boots and The Golden Dome IIRC). Below are scans of the cards I found. Keep in mind this would be 1994-95 when access to DTP resources was rare and our graphic skills were even more negligible...


MANY OF US SMOKED AT THE TIME 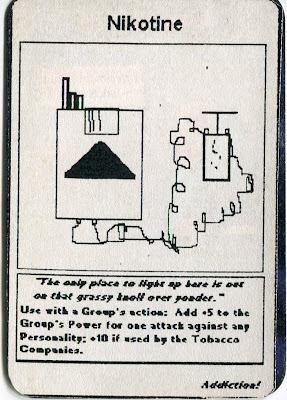 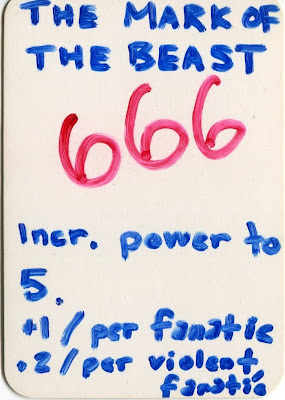 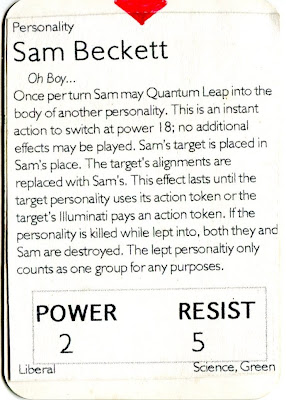 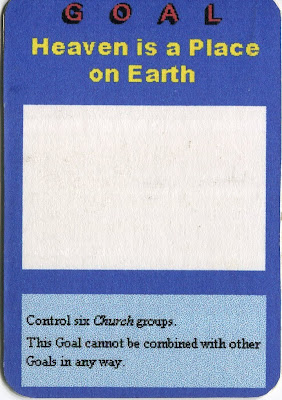 A NEW LINE OF ACCESSORIES 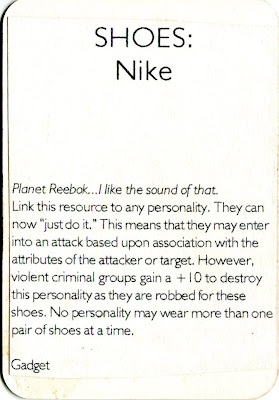 Posted by Lowell Francis at 1:26 PM