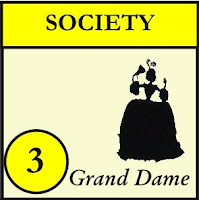 I enjoyed the sweaty, exhausting, and sometimes aggravating Gen Con of 2013. I didn’t get a chance to say hi to as many people as I wanted to. As I expected, I picked up a ton of Pelgrane Books 13th Age, Double Tap, Owl Hoot Trail, Eternal Lies, Hillfolk, and Blood on the Snow. I’ll probably write about some of those in the next few weeks- I’m generally really pleased by them. I think one of the most amazing things about Pelgrane is that each line has a unique and distinctive graphic presentation, all of amazing quality. The Hillfolk books look completely different from the Night’s Black Agents volumes- but they don’t feel like they share a house style. White Wolf does striking layout, but you can tell when you’re looking at one of their books based on the shared design elements. I picked up a few other new things- a couple of figures from a new Bushido line of samurai miniatures, Monsterhearts, FATE Accelerated,  and the Warbirds rpg (imagine Crimson Skies with the serial numbers filed off). In the Chimera shop buy one get three free I bought two bundles including This Favored Land, some Star Wars books, the revised Grimoire for Ars Magica 4e, and a couple of old Mayfair Role Aids sets.

But all of that was mostly a distraction to keep myself occupied until the final showdown.

TO BATTLE
The actual TTDM process went well, broken into several slices. I had to do an interview for the first part late in the day on Saturday. I played in an rpg, Trash Planet by Shoe Skogen, for the first three hours and then had to duck out. Unfortunately that meant that heading back to the main building I crashed straight into the costume parade which locked me up for about thirty minutes. I stopped by where I’d stashed my copy of the game and then headed over to the meeting place- but then I got a text that they were running a little behind. Luckily I managed to find a free comfy bench and sat down- trying to let the adrenalin burned gently off rather than completely crashing.

When we finally went to the interview, my hopes were confirmed. I’m an unabashed fan of LoadingReadyRun- I started watching everything they did after I saw they started Unskippable on the Escapist. I watch all the videos- even the MTG podcasts and the "Loading Time" Behind the Scenes stuff. So when Graham from LRR walked up I went pretty much full fanboy. I also met Trin from Cards Against Humanity, and a nice camera operator who’s name I either didn’t catch or went out of my head. We had to wander around the convention for fifteen minutes to find a place of relative quiet for the interview. I thought that went pretty well- though trying not to look straight at the camera’s a talent I clearly haven’t developed.

Then we went down to the board game hall when they shot an unboxing video of Right of Succession: setting up the board and walking through a turn of play. Finally I had to stand there while they shot me making a “Grrr” face for the Deathmatch promo materials. It had the wiff of the absurd. I did hand off copies of some of the books I’d done to Graham, so I was pretty happy when all was said and done. The TTDM contestants had arranged for a small gathering at one of the bars later Saturday night, but I was exhausted by that point and others in our party were as well, so I unfortunately skipped out on that.

The next morning I had the actual pitch before the judges. I think I was the absolute last person to go. I took along Mark and Derek for moral support. I wasn’t sure how the pitch would be structured- if it would be a good idea to have a team in the room. As it turned out, it wasn’t set up for that so they waited outside. I did have a chance to meet a couple of the other contestants- Robert Huss who created The Shadow Over Westminster and Mark Major and his partner (another name I blanked on) with Jupiter Deep published through Game Crafter. It also turned at that time that our pitch would be five minutes, not ten or fifteen as indicated in the earlier emails. I wasn’t expecting that would be too much of problem- I’d practiced a ten minute pitch, but that was a lot of time to fill. We talked for a few minutes and I was pretty calm.

…Until I actually walked into to give my presentation. It looked like something out of Shark Tank, with fifteen (I think) judges arranged in three rows. Heavy, bright lights, and no A/C in the room. I can’t imagine how wearing that must have been for the judging team over four days. I set up my game on a table in the middle, and then launched into my spiel, trying to keep an eye on the enormous red timer ticking away. My voice cracked, I repeated myself, I don’t think I hit everything I wanted- but you’ll see all of that when they actually post the video.

After the pitch (I think I did it in 4:30), I moved the game board up to the judge’s table, distributed extra copies of the rules and one-sheets and then went to the Q&A portion of the program. There I felt much better and more confident. I know and love this game and enjoy playing it. I didn’t get any real curveballs. Probably the strongest knock against it would be that we haven’t yet done any blind-testing. We’ve played it would probably four dozen people, but we hadn’t yet had the chance to give the final version a run through to get that kind of feedback. One judge asked an interesting question about the scoring logic for some of the end-game bonuses. That pointed out a piece of theme that I had in my head but hadn’t made explicit in the rules, i.e. why do the players actually get these bonus points? But the best part of the Q&A came when one judge asked if I’d heard of Blood Royale, which as I mentioned in my previous post, had inspired me to create this game. It was really satisfying to have someone spot what had been a thematic inspiration for me: at least I’d done that job well.

After that I went out and we did a brief exit interview. And then I was done. We gathered up the crew, did a final buy of product and then head out. And I pretty much collapsed on the ride home. We stopped off to eat BBQ and after that I desperately fought just falling asleep for the next two hours. Eventually I landed on my couch, my sweet delicious couch and slept for two or three hours.

THOUGHTS
I don't know what my chances are- some of the contestants have already published and marketed the games they've presented and they look quite nice. I built my prototypes myself- with the exception being the cards I recently had done up through DriveThruCards. I'll be curious to see how many of the others have done blind testing, as that could be a serious black-mark against me. I'd have liked to have played some of the others' games- I think several of us suggested they arrange a get-together room for that next year. I'm looking forward to the video though- in some ways. It will be a great tool for exposure and publicity  provided I don't look like too much of a buffoon on screen.
Posted by Lowell Francis at 2:50 PM