I'm still recovering, but the arm's letting me work a little longer at the computer. I wanted to put something up, so I thought I'd post a project from 2010 that ended up not going anywhere. Gene did some pages for it, so I've posted a couple of cutaways from that. Right now, I'm thinking I'm thinking about how I might rework some of this into a gaming set up. Maybe for an rpg or a board game....I've sketched out a couple of things. In any case, this is the two page pitch I put together for this fantasy animal-based story. 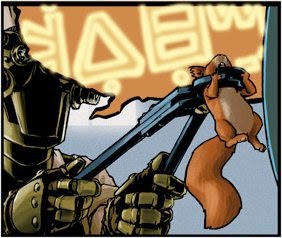 CODICI MALEFACTUS
Summary
Awakened to awareness and intelligence, the squirrel Kinder escapes from death into a new world. He gains sanctuary among a band of animals-- also transformed by accidents of human magic-- living in the walls of a sorcerous workshop called the Codici Malefactus. But these mages are not benevolent and discovery of the escaped animals means destruction. Kinder finds himself isolated from human and animal alike, trying to survive and avert disaster spawned from the very magic which created him.
Tag-Line
The Rats of NIMH in a maleficent Hogwarts.

Story
A fantastic half-workshop, half-laboratory, we see a boy, dressed in worn robes and the scraps of an archaic school uniform. He pulls out a small brown squirrel from a cage. Clutching it tightly, he consults from a battered tome. Then he speaks strange words that hang like ideograms in the air. The squirrel shivers and transforms as a force of magic coalesces in the air and enters it. The squirrel size doubles, forcing the boy to shift his grip. While still vaguely a squirrel, it seems unnatural with strange eyes, thorny horns and a bushy tail dotted with thorns. The squirrel cries out in the same hanging runes. Without a backward glance the boy drops the new beast over a half-wall into a makeshift pen.

But even as the squirrel lands, we see it change back-- though not completely. The glow has vanished, but it leaves behind traces of the horns and tail. Now it is simply Kinder, a squirrel forever altered by this magic and suddenly filled with intelligence and awareness. Wrestling with this new state Kinder stares at his own paws. Then his eyes track upwards into the maw of another enormous transformed beast. Kinder understands one thing: he is dinner.

But this monstrous beast rears back, crying out. Then, like Kinder, it reverts back to its original form, Leather, the slightly dopey boar. Multiple changes have made him slightly ape-like and marked with eyes gone burning yellow, armored scales, and metallic bristles. Still terrified, Kinder comes forward, trying to come to terms with his state. Leather looks at him with a mix of fear and wonder-- the squirrel having somehow driven out the alien spirit within him. The boar calms Kinder, and explains that the changes will take time to get used to. The sudden return of the student feeder interrupts their bonding.

The boy realizes something has gone terribly wrong and grabs up Kinder-- deftly avoiding the barbs and binding him in his pocket. He hunts about for a scapegoat, settling on Nevral, the least talented of the apprentices. Kinder hears and comprehends the shouting of an outraged master and fleeing apprentices. The squirrel tears free from the student's pocket, racing across the workshop, but finds himself trapped in a corner. The unjustly punished student spots him, but hesitates. He stares at Kinder but leaves him be, alone in this new and strange world.

Wandering through the dangerous world of this sorcerous workshop, Kinder escapes death with the intervention of another transformed animal, The Indomitable Lady Rekhavyk (“my full name, thank you very much...”). This heroic and self-styled Puss-in-Boots savior to the lab animals drags him along. Disoriented, Kinder finds himself led into the walls of the workshop-- only then realizing the scale of this new place. Once a palace, it now hosts this strange faction of laboring mages and their apprentices. Rekhavyk incompletely explains the new art of the human wizards, one which summons otherworldly forces to transform animals temporarily into powerful magical servants. The real secret hidden from the humans is that over time this transforms the animals not only physically but mentally.

Kinder stares in wonder as Rekhavyk leads him into the refuge of those awakened animals who have escaped-- a sanctum built into the walls and abandoned areas of the workshop itself. Over years they have built themselves a labyrinthine sanctuary out of the cast-offs from the workshop itself. Kinder and Rekhavyk scurry through abandoned rooms with cleverly concealed makeshift bridges and moving platforms. They rise higher, to the ruined towers of the lab. Kinder looks out to see a city below; for a brief moment he has a flash of a glorious mecca. Then he sees the real city broken and black, huddling under dark clouds and half buried by gray snow. Rekhavyk draws him away into the sanctum of the animals.

Here Kinder sees a host of animals, all showing signs of the transformation-- a bizarre menagerie of woodland creatures partially overlaid with the bits and pieces of nightmarish monsters. Brought before the leader of the group, Wrethe, the squirrel learns of the animal's origin and of the magic which created them. However his own revelation startles the assembled group. Each gained knowledge and weird changes over time, but Kinder awoke in a single transformation. A greater shock greets the accidental revelation that he understands the humans' speech. While some look on Kinder with wonder, others fear his difference. In the days to follow he begins to understand that even here he remains an outsider. But news of Leather's impending destruction shocks him out of his self-pity and into action.

Desperate to save the first animal who aided him, Kinder begs the other animals for aid. After much argument the elders deny his petition, to the satisfaction of Rekhavyk who has come to begrudge the squirrel's quick knowledge and adventuresome spirit. Leather would be too difficult to spirit away and his size would make him nearly impossible to conceal. Despite the prohibition, Kinder decides to strike forward anyway. He closely observes the dynamics of the masters and students-- aided and hindered by the conflicting voices in his head. Slowly a plan forms, one lying outside the scope of what the other animals can muster.

Now Kinder must execute his operation alone. Can he free Leather without revealing the animals? Can he find refuge for his friend? Will Nevral turn out to be an ally or enemy in his quest? Kinder must put his own safety and that of his new home at risk to act on loyalty and friendship. This rebellious first step may lead him against all of the powers of destruction the mages have unwittingly tapped. 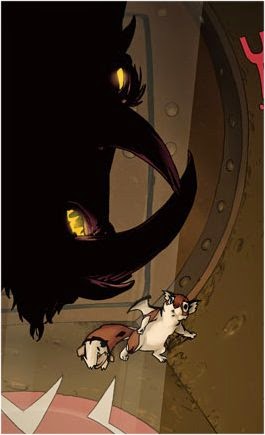 Setting and Background
The Codici itself takes up only a small portion of a grand palace that has fallen into ruins. There's a strong visual parallel between the scrabbled-together nests and warrens of the animals and the shabby disrepair the mages live in. The humans cram themselves into a fraction of the available space. Around them lie the scattered detritus of failed magics and broken projects. There's a generally renaissance atmosphere, but one that blends with classic magical elements and Clockpunk-style devices and machines. The palace's size means coming across art, decorations and designs from history and the world.

In the far background, outside the walls of the Codici, hangs the conflict just past-- a battle between practitioners of this new summoning magic and the old ways. On one side stood a magic capable of permanence requiring study, cost and intense labor; on the other stood the new magic quickly learned, free to use but remaining temporary.

The victory of the new magic destroyed most of those who knew the old ways. Codici Malefactus serves as one of the few places where that knowledge remains...at least partially. The Overlord who swept the land with the new magic keeps this place to repair the remaining old devices and useful engines. The staff survive at his behest. While they would rather be pursuing more fully their own experiments with the new ways, they must work with what little they can glean to keep things running. If they fail, they know the Overlord will have little pity for them.

Characters
The setting presents opportunities for a host of rich characters. The other transformed animals run the gamut of birds, beasts and even insects. They must each deal with their new intelligence and personality as well as their Pokemon-like physical changes and existence. Kinder will meet many struggling with this and the urges of their natural instincts. Some, like Rekhayvk, create new roles and identities for themselves. But the hero-cat holds a difficult position; she must rescue lab animals but also choose who will be worthy of rescue. These clashing personalities create internal battles over how best to survive. Kinder can see how much the animal society echoes the humans they fear.

The humans of the Codici Malefactus present another rich set of characters, as potential allies, adversaries and background color. The “Students” serve more as servants and apprentices, forced to learn bits and pieces of what they consider a failed art. They seethe with resentment and youthful power politics. They know they have a gift for magic, but find themselves stymied in their quest for greater power. Most dance between undercutting their masters and trying to curry favor. The master resent their place here-- dealing with unruly apprentices and eking out time for their own pursuit of power. Only the mysterious guild mistress, Sulhara, holds them in line. Even she serves still another master, the Overlord, who far away carries out his own plans to bring all of the world under his thumb.

Perhaps the most ambiguous human character will be the boy who aids Kinder in the beginning, Nevral. He possesses less of the magical gift than the other apprentices present. This makes him a ready scapegoat. His concealed strength lies in his ability to focus and to study. Where others glide through on sheer native talent, he works for his victories. As a result, he may understand more fully the very magic the others wield so easily. The developing relationship between Nevral and Kinder will be an important one to the course of the story.

Future
Short-term Stories: Kinder joins the Civilization's fight for survival, but soon learns how precarious their way of life is. Constantly hunted as vermin, the animals scavenge homes, food and new escapees. They must pick their battles carefully. Upsetting the mages' plans could bring discovery. At the same time Kinder must learn about his fellow animals. To fit in he must understand their stories and quirks.
Medium-term Stories: Kinder learns more about the infernal nature of the summoned spirits, the history of the last Mages' War, and his own unique enchantment. Kinder rebels against the cautious animal Elders and risks an alliance with Nerval. It is a friendship that will spark a new war, but might save the world.
Long-term Story: Kinder must uncover a way to stop to the spirits' plan for the destruction of everything.

Posted by Lowell Francis at 1:57 PM