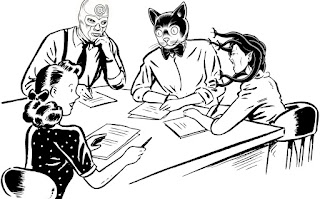 I've been working on my Magic, Inc game in preparation for Origins. I'm taking a version of it for Games on Demand. I've assembled a special Action Cards version and I sent off for the printed decks yesterday. Our playtest went well and I made system tweaks based on the feedback.

Magic, Inc's about slacker office workers in a magical corporation trying to keep their jobs. I took a preliminary version of it with me to Metatopia '14. I'll have to write about that weird experience someday. Play to the new & simplified AC version, and I've assembled playbooks based on job titles. I've actually done more work on the random generators for the setting, a toolbox for GMs. Eventually I want playbook approach for adventures, so anyone running it could spend an hour whipping up the details. That might include organization charts for other divisions and offices. With that in mind, I crafted a new generator company departments. The list's below. I already love some of these results and desperately want to put them into play.