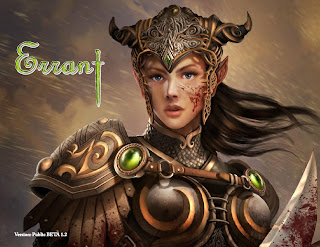 Are We Not Old School?
So I was a little aghast the other day when I saw someone refer to a game from 1985 as being "Old School." I mean by that time we’re getting later editions of Rolemaster, DC Heroes, Danger International, Sandman, TMNT...quite honestly, when people have been talking about OSR stuff, I’ve had in my head the original three small booklet booked set of Dungeons and Dragons, arcane copies of Empire of the Petal Throne, Superhero 2044, Arduin, and the City State of the Invincible Overlord. So apparently Old School is a thematic with a pretty wide and sweeping reach. OK...I’m still working to get my head around that. Some things make is easier to find enthusiasm for that kind of...geez, I don’t want to say retro, but certainly simplified mechanics built around conventions that a lot of modern games moved away from. Greg Christopher’s work has significantly increased my interest in these kinds of games. I reviewed Cascade Failure a few weeks ago, today I want to look at Errant, his fantasy rpg.

What Is It?
Like Cascade Failure, Errant is a free to download complete rpg. Also like CF, it is much, much better than you’d ever expect for a free product. It is again professional looking, with strong art and excellent page design. Everything’s presented cleanly, with easy to read text, even in the densest lists. Materials appear where you would expect them. Christopher’s also hyperlinked to the websites of the various artists who provided work for the book, a nice use of that function. Errant’s 82 landscaped pages long, with each page being split into two side-by-side pages.

Errant’s a complete and simple fantasy rpg. Normally I expect a game to have some statement of setting or purpose at the beginning, but Errant only offers a sentence or two. There’s the question of what the game’s actually about beyond being an rpg with fantasy characters. We can get some of that from the cover, but given the variety of OSR projects out there it would be good to have something which sets out what the tone and purpose is. I know because I’ve poked around the site, but in isolation it could use a brief mission statement. If, on the other hand, the purpose of the game is to provide a kind of clean, generic and uncolored fantasy rpg then it does succeed for the most part. We don’t see an actual world or setting- except through the lens of items within the game: what kinds of equipment are available, Bards as a class, the absence of Priests as a playable class but the presence of Paladins, the power and kind of magic available. I think that’s a fun exercise- figuring out what assumptions are in operation in an Errant setting.

Section Breakdown
After some general statements, Errant moves quickly into character creation. The book breaks this cleanly into a series of steps (hyperlinked for easy navigation). Players roll 3d6 for the classic six attributes and then assign them. Players then choose from one of six races. Each offers some benefits (saving throw bonuses, extra languages, abilities, experience point modifiers). Following this, players select a class. Each offers their own abilities, class skills, Hit Dice, weapon training, starting gold and so on. These are laid out very cleanly, with a few surprises as I mentioned above. We have Bard, Paladin and Druid, but no Priest. We also have the Knave, a thief class which again points to a kind of classic medieval theme running through the material. Fighters, Rangers, Scholars and Sorcerers rough out the choices. The game offers class skills, but these operate more as special abilities- which seems odd as the system also includes a set of gifts. I’m not sure about why these need to be broken into two different groups.

Players determine their Saving Throws based on their class next. These are based on classes and race modifiers. I like that Errant presents some concrete examples of what these kinds of saves look like, since they’re a major element of the system. Characters can next be given ambitions- major and minor. These can be used to demonstrate a character’s personality, and minor ambitions fulfilled offer an EXP benefit. Next players determine Luck, Languages, Karma, Armor Class and Hit Points- in this last section we get a fairly extensive treatment of the damage system. Finally players also get to pick Gifts every other level of advancement, which operate like Feats but with a simplified approach.

The next section deals with Money and Equipment- we get the usual tables, some discussion of economics and currency, and weapon descriptions. I like the little section here devoted to the idea of retainers. This isn’t so much a set of rules as a suggestion for how to provide color to the group. There’s literally a picture of a mule here, so in my head I imagine Diablo or Dungeon Siege. The Adventuring Mechanics section offers simple rules on movement, encounters, food, encumbrance and the like. There’s tantalizing hints here about the world of Errant and the tone ("a time before exact timekeeping," "...is in a dark age.") but no specifics. The section also covers combat. This works as you would expect- a fast d20 roll against an opponent’s Armor Class. A successful roll results in damage. But the game also offers some additional complications and options: notes on moving and attack, defensive stances, parries and the like. Those make the system a more interesting toolbox.

The Gifts section offers additional abilities for the characters to choose from as they advance. These function essentially as Feat retrofitted on to classic D&D. Some of the 75 have class restrictions, but none have overly complicated rules, which I appreciate. The Magic section presents rules for casting spells across all classes. These rules present some novel mechanics. First, there are no per day limits on casting but any spell costs HP to cast. Spells also require a casting roll with penalties if you’re unable to provide the full range of speech and movement. There’s a simple system for counterspelling, but generally the magic feels like the classic approach (complete with Magic Schools such as Abjuration, Evocation,etc). twenty-four pages of the book follow with the lists of spells and their effects.

The game provides a simple approach to the mechanics. Active rolls based on attributes and reaction checks being saving throws. That sets up a basic dynamic which the game maintains. We get simple solutions to thorny problems: HPs as a spell cost solves the issue of a spell and level chart. The Karma rules provide a general workaround to the idea of alignment, but at the same time may not be detailed enough to be playable. Players never like outside judgments on their choices and I’m not sure how that mechanic deals with that.

Some nice details to the classes which make them feel unique and interesting. For example, the Fighters get to pick from Fighting Styles which provide easily tracked but significant bonuses which can be changed from round to round. That’s a nice player-facing detail which can be easily managed.

Luck’s a nice idea. Essentially each character begins with a Luck value. At any time they can spend appoint of their Luck to at that value to a roll. Luck does not regenerate or restore, so as the campaign progresses, players have to rely more on their natural talent rather than their luck. That’s a great idea.

When characters hit zero HP, they begin to take Attribute Damage. Errant includes that as a significant factor. My impression is that HP serves as a pool of Stun or Subdual damage, but when you get to Attribute Damage, you’re really at risk. I like that.

The Gifts and Magic Spells both feel pretty complete despite their brevity.

I think the game could benefit from a clearer or more extensive statement of purpose at the beginning. I have a sense that Christopher has an agenda beyond simply it being an exercise.

The world of Errant is hinted at, but never provided. I suspect the games intended to be generic- but it never crosses the line into saying that. Instead we get suggestions that there might actually be a setting, but that isn’t paid off.

The game presents no monsters or adversaries. There’s nothing in the rules as guidelines for creating them as well. That would seem to be a problem for anyone wanting to run this as anything beyond a purely humanoid vs. humanoid game. Usually that doesn’t bother me- I think too many games spend too much time on pages and pages of monsters. But I would have like a few examples as benchmarks and some ideas on how to convert into the system.

Overall
I enjoyed reading this- it is an example of excellent craftsmanship in making a game. If you like ideas about design, in game and in layout, you should check this out. One thing I appreciate is that Christopher approaches the OSR material with a modern eye. He doesn’t stick with a design style that echoes or even apes the old games (ala Dark Dungeons or Dungeon Crawl Classics Role Playing Game Beta Rules) or take a shock approach (Lamentations of the Flame Princess (Grindhouse Edition)). Once again, I think Christopher has provided an excellent game and one that again sets the bar incredibly high for anyone writing free rpg material. And just to be clear- had this been a purchasable pdf product, I would have been satisfied with my purchase.
Posted by Lowell Francis at 2:00 PM