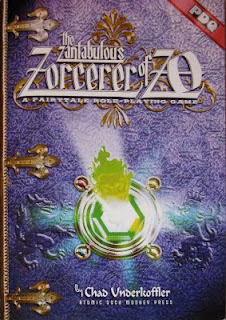 I needed to write this review of Zorceror of Zo after reading another review. That review struck me because I’d had such a different response. (Full disclosure and another perspective on this game, see "Excellent but you shouldn't buy it.") I hadn’t read the game book in some years, but I had fond memories of it. It had been in the back of my mind as a possible game for some time. I wanted to go back, re-read the text and see if I had missed something the first time. I recalled it as useful, but was I wrong?

Down the Rabbit Hole?
The Zantabulous Zorceror of Zo describes itself as a Fairytale Role-Playing Game. But it also describes itself as "a PDQ campaign in actual play" which is worth noting. This is a reading review based on the pdf which clocks in at 104 landscaped split pages (about 192 pages of text). The layout’s simple, basic and effective. Generally it is clean, without many errors or layout artifacts. I’m happier with this kind of simple design these days than more involved approaches. We’ll put that down to the curmudgeon factor. If there’s a negative here, it is that the art’s a mixed bag. Some illustrations feel resonant, while others appear cartoony.

With a name like Zorceror of Zo (ZoZ from now on), the game wears its major influence on its sleeve, echoing a little of Oz. But that’s more in the sense of the game providing a complete and coherent (as much as possible) fairytale world made up whole cloth. We’re not adapting real world tales (as Grimm does) but instead the game aims to simulate a ‘fairy-tale’ genre and atmosphere. The book begins with some discussion of those tropes and an explanation of how this setting and game arose out of his players input. The suggestions here (including a lengthy bibliography) present more themes than specifics. Chad Underkoffler follows that with nine pages which do lay out Zo as presented in his campaign, but again the suggestion is that GMs can create their own highly divergent versions of these concepts.

The System
PDQ stands for the Prose Descriptive Quality system and, of course, Pretty Damn Quick- which this game intends to be. This is a simple system, I’d say thinner than FATE or Savage Worlds. I think it aspires to have narrative as a force as the former does, and to have adaptability as a key as the latter does. Certainly in looking through I can see how easily and quickly the game could be moved over to another setting or genre (like SW). FATE on the other hand requires a little more work depending on how far you’re moving away from your reference game (Diaspora, SoTC, Dresden). The key here is that PDQ is a low detail, high trust system- relying on the players to exert control and structure. I should note that my biases lean in that direction- not for any specific game/system, but that in the last ten years our group has moved more and more to these more transparent and simple systems with greater shared authority.

PDQ in ZoZ operates with a basic 2d6 roll for tests, with that roll being modified by the rating of the Qualities they’re using. ZoZ uses a "lite" version of the rules as originally seen in Truth & Justice. Underkoffler gives some ‘behind the curtain’ explanations of that decision- again a strategy used throughout the book which I particularly enjoy. Essentially each Quality a character has is given a descriptive word or phrase. If the task being attempted falls under that description, then the player can gain a bonus. This may be one of those places where some players and GMs might find objection. The rules require some careful judgment on the part of GMs. They have the ultimate responsibility to say "too broad" or "too narrow" to a Quality. Some may find that too loosey goosey for their taste. Others may be bothered that the GM has to make those calls at the start. That could be frustrating for a group if the GM has to keep saying "No, but..." to things players come up with. If the players and GM are on the same page about the system, then this won’t be a problem. If they are, then it could create ill will.

Quality Ranks
Qualities cover just about everything- what in other games might be called skills, abilities, traits, tools, magic, gifts, characteristics, advantages, etc. FATE and Hero Quest take similar universal approaches. Each quality has a rank ranging from Poor to Master, with undefined Qualities being rolled as Average. Players can also develop Special Moves which grant them a larger bonus in a narrower area under a Quality. Special Moves, Hero Points and cool description can cause an Upshift, which means a bump of one rank on an attempt. Downshiifts, on the other hand, reduce effective rank when a situation suddenly changes. This is different from the inherent difficulty of the task which sets the number needed to be rolled to succeed.

That’s basically it- with some additional complications for direct conflicts, combat, damage and the like. It is a simple and abstract system based on a clear and quick mechanic. Players have the chance to narrate their actions to gain bonuses to the attempt, the effect or both. Some Qualities represent absolute magic abilities (Breathe Underwater, Fly) while others represent magic. Advancement comes from Learning Points which come from failures in the course of play for the most part. The game has brief but interesting rules for having enchanted items and the cost of doing magic.

Characters
Character creation is similarly simple and open-ended. Players select a set which determines how many of each Quality Rank they begin with. They then select those Qualities, including Magic-Stars and Gifts. Everything else is the color for the character: background, origin, reason for the group being together. I like that this section provides sample PCs with commentary from the players who originally created them. It makes the examples feel more real and concrete. There some notes which follow providing example NPCs and some minimal advice on GMing, but it largely assumes a knowledgeable reader and doesn’t spend a lot of time on this.

Zecrets of the Zorcerer
Zorcerer of Zo so far has provided some light ideas on genre, a sketch of the setting, and a very simple resolution system. If that were it alone, I’ll admit I’d be disappointed. However at page 101, the other shoe drops- with Underkoffler backing up his description of the game as "a PDQ campaign in actual play." Early on he cite Aaron Allston’s Strike Force as a huge influence on his gaming, and I can sympathize. Strike Force made an impact on every Champions campaign I saw come in the years after it came out, and many non-Champions campaigns. His insight into a long-term campaign as it actually rolled out, how he’d dealt with GM problems and the tools he had brought to bear was something GMs and players were looking for.

Chad Underkoffler does the same thing here. In fifty-five pages he presents his campaign, session by session. This dovetails with the earlier behind the scene commentary throughout the book. He presents his ideas, his intentions, his stories and how those changed on execution at the table. We also get commentary from his players about their reactions and choices in play. Particular interactions get examined from several different viewpoints. It is like reading the Director’s Commentary on a role-playing campaign. Honestly, it is what I always hope for when I read session reports: not just the story, but insights into the GM and players’ thinking, how they dealt with challenges and how the game as imagined transformed over time. Bluntly, this section is amazing and well worth reading. I think GMs with a dedication to their craft can find lots to take away from this.

Overall
On re-reading, I find a lot to love in this book. I’m not entirely sold on the PDQ system- I like a little more crunch. Truth & Justice and Swashbucklers of the 7 Skies offer a little more of that. On the other hand, if I were going to do an off-the-cuff rpg, I think this would be my "go to" system now (over Unisystem). I think it is worth looking at this from three positions. Would I play this game? Yes, I would play in this campaign setting with these rules. Would I GM this game? Yes, especially with newer and less experienced players who might want some goofy fantasy and easy rules. Did I get something from just reading the book? Yes, the master-craft class in GMing provided in the last third of the book was worth the price of admission for me.

If you like crunchy, crunchy games you probably won’t like this. If you’re looking for a strong, pre-built setting to play a fairytale game in, this probably won’t give you enough (look at Wonderland No More: Adventures in a Wonderland Gone Wrong, Grimm or Adventures in Oz: Fantasy Roleplaying Beyond the Yellow Brick Road). But I do think GMs of all kinds could find solid insight from the campaign postmortem. I’ve certainly tried to emulate Underkoffler’s approach in writing assessments of my campaigns after the fact. With those reservations, I would recommend this game.
Posted by Lowell Francis at 9:39 PM