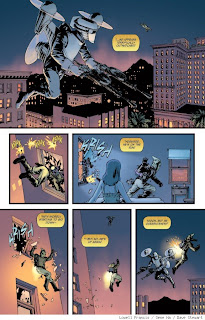 Edit: Read Rocketeer Adventures #2! I have a story in it!

I grew up a little too late to have a real appreciation of the Pulp genre early on...I was caught up in fantasy and sci-fi, until I read a Doc Savage novel. My sister had collected them and I tore through them, eventually buying them as I could find them. Doc was, and still is, my favorite of those characters. I loved The Shadow as well, but more from the brief DC series with the Michael Kaluta covers. They were never together in my head as being pulp as well but I read Howard's Conan stories, Burroughs John Carter, Manley Wade Wellman's Silver John, and even some of the fringe-y Lovecraftian stories (the second tier authors). Pulp permeated my other reading habits eventually- Shang Chi from Marvel had a long association with Sax Rohmer's Fu Manchu and I followed those arcs that really played on that. I also always imagined those b&w Sherlock Holmes and Charlie Chan movies from the 1940's as being of that- I was a little surprised when I went to read Holmes and realized he wasn't around during WW2.

Later I got turned on to a whole new dimension to the Pulp genre through Byron Preiss' Weird Heroes series. From there I followed the line to Philip Jose Farmer's Greatheart Silver and the whole Wold Newton theory. In comic books I bought all of the DC reboot of The Shadow and Doc Savage until the former got really weird and the latter got cancelled. I love Planetary because it often played off of those tropes. I read The Spirit reprints and comics when I could find them. I had a Kitchen Sink Jam issue of the Spirit that I read until it fell apart. And I had great hopes for the DC "Golden Age" series which was going to pull together all of those classic characters along with a 1940's Batman. But it got cancelled.

Of course I always look at anything in terms of how it can get played out at the game table. The first game I recall dealing with that was Crimefighters, an rpg by Jeff Dee inserted into an issue of the Dragon in 1981. I bought the great game Daredevils from FGU and loved that. When we finally did try to play Pulp games we usually used GURPS, though. The GURPS Cliffhangers book came out later than I was running, but it was a good resource. Justice, Inc for Champions as well. I ran Adventure! for a couple of session and loved it. And I recently picked up a copy of Spirit of the Century. But I've never run a sustained Pulp rpg, just one-shots and mini-campaigns.

All of which is said to establish some of my bona fides about the pulp genre. And to encourage you to go out and buy a copy of Rocketeer Adventures #2 when it comes out on June 29th. I remember reading The Rocketeer when it first came out (as well as Airboy, Grimjack, Fish Police and Nexus...they're all comics I'd sneak into my sister's room to read through). So to have had a chance to write a story in that setting was an amazing opportunity. And we have a couple of advance reviews of the book out, one at Newsarama and one at Horror Havens. After reading those two, I'm probably going to avoid reading any more reviews--- because they're so positive and good!

So pick up a copy! And if you like superheroes, the first issue of my book Project Superman from DC will also be out that day!