Behold the Beast: Last Thoughts on Horror RPGs for October 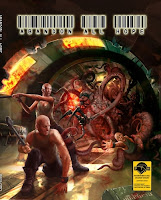 A MENAGERIE OF TERRORS

On this, the last day of October, I return to horrors. Over the past couple of months, I’ve cataloged a couple hundred horror rpgs and supplements- some described and others merely mentioned in passing. When I was growing up my favorite gaming books were essentially just lists of the various wargames and rpgs available (Dunnigan’s Complete Wargames Handbook for example). So I’ve always had a fondness for that kind of cataloging. But I didn’t just want a list- because you can find most of that basic info online with a cursory search. Instead I tried to provide “value-added” entries with some discussion and review of the games. I also tried to offer some historical context. Below I present a few last thoughts on horror rpgs- things which struck me as I assembled the lists. I have a couple of questions for readers as well. Some things I still haven’t gotten to- for example, it would be worth really looking at the evolution of sanity and other breakdown mechanics in these games. Call of Cthulhu began with that innovation and other horror systems have been working variants on it ever since. I do have to thank the podcast Ken & Robin Talk About Stuff for spurring me to do this. They made a comment about how many “firsts” CoC had brought to gaming and that got me to look and assemble that first list.

These History of Horror RPG lists generated decent response, I suspect in part because I started with a popular genre. I ended up almost overwhelmed by the volume of material available. I’d like to do another set of rpg histories, and I’d like some feedback on which genre I should do next: Espionage, Mecha, Post-Apocalypse, Steampunk/Victoriana, Superhero, or Western. I’ve set up a poll to the side for voting, and I’ll take that into consideration.

The Problem of Post-Apocalypse
A major problem in assembling the lists of horror rpgs arose from labeling games as horror or not. For example, I hadn’t pictured Mage as a horror game, but at least one commenter said they’d seen and played it that way. The same for Changeling the Lost, where I found the opposite response. Some games advertise themselves as horror but really seem to be combat or tactical military games. Does the inclusion of supernatural elements or monsters automatically make something a horror game? Is it a useful distinction to say that something’s a horror game? Ken Hite has suggested that horror might be better seen as an aspect, like Steampunk- an aesthetic or set of elements which can be dropped into a genre. That’s interesting- and helps with the other problem that these games have two distinct forms: as written and as played. I’ve seen plenty of games which looked like horror, but the rules didn’t focus or really support the horror idea. And, of course, there’s the case of Vampires being played as superheroes.

I had to think hardest about the various post-apocalypse games on the list. Some of them obviously fit- with demonic or zombie invasions. But even some of those cases really just focused on blowing things up- even though the set up itself offered truly terrifying implications. It may be that when I think about Post Apocalypse games, my imagination naturally stresses the horrific elements of them. When it comes down to it, any post-apocalypse game can descend into those tropes. Even something as dry and procedural as Twilight 2000 deals in a dark world of the struggle for survival. It is effectively The Walking Dead without zombies (or Revolution, I guess, which I hear is a terrible show). Is Apocalypse World horror- or is it just horrifying? It isn’t supernatural horror- but rather an existential horror, depending on how the GM dials up the nihilism. I suspect that’s based on how the GM frames it- a slice of unpleasant life drama, a building game, a forced march towards oblivion…

The Hunting Continuum
Many games are about hunters- people thrust directly into a role of pursuing or investigating evil. This isn’t about survival, but active pursuit of scary stuff. Call of Cthulhu starts this and establishes one end of the spectrum- the Weak Hunters. These are characters who aren’t even close in power to their enemies. They’re normal humans who can, on occasion through luck, manage to find a way to defeat a more powerful adversary. They lack special powers and won’t truly advance through the course of the game. Even the most powerful weapons they can muster- spells and grimoires- will destroy them in the process. One step up from these might be the Prepared or Supported Hunter. They have access to a patron or group (Chill) and/or to specialized equipment (Ghostbusters or Rippers). Alternately, these could simply be normal characters but they actually get significantly better as the game goes on, unlike CoC. One step further and we get to Hunters with innate powers and abilities- magic, psionic, heightened talents (Buffy, Hunter). What’s interesting is that this end of the spectrum then starts to bleed into Monsters. Vampire and other games like it often have a frame in which the characters are effectively hunters battling even worse threats.

It would be interesting to map hunter games on a graph, with “power” on one axis and “willingness” on the other. In Call of Cthulhu, investigators are often thrust into the situation without choice. They eventually may come to see this as a duty, but based on self-preservation or fatalism. The “Drives” system of Trail of Cthulhu reflects this. The protagonists of Changeling the Lost are truly reluctant hunters, torn between their instinct for self-preservation and need to fight back against those who did this to them. Some games have hunters who stumble into the world or who are recruited by a more potent force or group (Delta Green and Witch Hunter: The Invisible World). Some have the fight simply as a matter of existence (Vampire, Little Fears), while others live for that battle (Werewolf the Apocalypse).

Rent Veils
I was surprised to see how many horror games used the “Rent Veil” approach. Essentially ordinary people get a peek behind the curtain and the horrors therein. In some ways, Call of Cthulhu is the prototype of this. But many of these games are more psychological or surreal: Kingdom of Nothing, Don’t Rest Your Head, .44: The Game of Automatic Fear. These games split pretty evenly between the characters put under threat by the revelation and the characters becoming hunters. The “Secret World” idea’s a cool one- especially as it allows the GM to slowly build up the situation. At least part of the play comes from exploring and learning the rules of the world. In many ways Harry Potter’s another version of this. In horror games, however, the world revealed isn’t a nice one- it is terrifying and awful. It can offer the existential dilemma of something like The Matrix or They Live. Often the hidden secrets presented are supremely creepy and cool.

But cool isn’t enough. I hit a number of these games which presented a freaky world of high weirdness, but fail to explain what the players actually do. Sometimes that’s a problem in the blurb, cover material, or publisher website. I hunted through those trying to get a sense to no avail. I had to track down the game or read multiple reviews to figure out what the play was actually about. In a couple of cases, even that didn’t help. The rules would present the strange world but offer no sense of what a campaign looked like. That’s not a great approach- it may be intriguing, but ultimately what it says to me is that your idea isn’t fully formed or that it is too weak to actually be presented as tabletop play. A few games went even further- simply suggesting the set-up was Scary!, but not explaining any further- just a couple of cryptic comments and enigmatic first-person quotes. That’s a huge turn off for me. There are so many great games out there- you need to sell me on the fun of your game. Tell me straight up; if you can’t do that then there might be something wrong with the structure of the game.

Really?
Two horror sub-genres surprised me with their sheer volume. First, the prevalence of Horror Comedy felt weird because I find comedy rpgs difficult to pull off. I think Ghostbusters works, but many other games which want to be funny seem to push things too far and descend into the goofy or crude. Many horror comedy games are simply parody of other games (Vampire Hunter$, Bloodsucker the Angst). Others parody genre films (Brain Soda, Scared Stiff) and some go for tongue-in-cheek gaming (Tales from the Crypt, Cannibal Contagion). The most interesting of these may be the games that add horror lightly to a more serious game set up (SLA Industries, The Shab al-Hibri Roach, Escape from Tentacle City). The difficulty with humor in rpgs is that breaking into humor already operates as a release valve in these games. Players instinctively move to jokes and comedy as a means to escape tension. When you start out from the funny, you usually have to stay funny or go absurdist. It is more difficult to move to horror from there. A counter example might be Shawn of the Dead which uses light comedy to set up and underscore the horror which follows. Hmmm…

Second, I was surprised at the number of “Perilous Children” games- a horror game with children as protagonists (either pursued or as hunters). I’d known about most of the games of this type, but I hadn’t really seen that as distinct set of games. The ever-excellent blog Shorty Monster has a great post on this topic- Playing as Children. To his list of games, I’d add a couple of others- KidWorld and The Creep Chronicle. But I’d also offer another game which follows the same pattern, John Wick's Cat. In that game you play ordinary housecats trying to protect your owners from threats and monsters they cannot see. There’s a parallel here- playing the weakest or most underestimated heroes in the face of terrors. That’s a real challenge and worth playing every once in a while to mirror and play against standard rpg approaches.


Final Thoughts
That’s it- Happy Halloween everyone! Vote up top if there’s a particular genre you think is worth looking at further. I’ll continue this series at the end of December when I survey all of the Horror RPGs published in 2012.