List of the Missing: Bits Left off My History of Horror RPGs 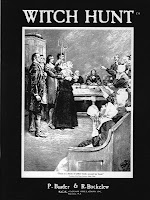 THE LOATHSOME AND ENDLESS CUTTING

When I put together my various History of Horror RPGs lists, I found myself trapped a little. The earliest lists had plenty of room- I could get several years of publications on one list without too many cuts. But as the pace of publishing accelerated, I had to take smaller and smaller snapshots. I decided I wanted no more than 25 items on a list, to keep it manageable if I could. Eventually that meant cutting some things and only mentioning them in the header. However a number of interesting items I just missed in my initial go through. I could simply tack them on to entries, but I decided to look at these sneaky and edge-case rpgs. As always, I hope I've provided value-added commentary to these entries.

1. Witch Hunt (1983)
This early rpg I remember seeing in various magazines, but never actually on game store shelves. In Witch Hunt players can either be a coven of witches in 1690's New England or a group of Magistrates. Each offers a radically different campaign. Witches cast spells (and doing so while remaining alive gains them experience). That means that the supernatural is real in the setting, an assumption setting the game logic. The process of Witch trials takes up a significant chunk of the rules. Is it horror? It is a marginal case- a game which lends itself naturally to those themes but which could easily be played cold and straight. I think it could be used to represent a certain kind of existential horror- with the threat of accusations, punishment, and the actual presence of dark powers as a factor. Witch Hunt is one of the earliest non-Medieval history games as well as one of the earliest horror games. 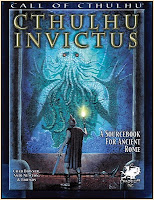 2. Cthulhu Invictus and Others
In collapsing Call of Cthulhu, as produced by Chaosium, down to one early entry, I missed a number of interesting and distinct flavors. Of course there's Cthulhu Invictus which covers running CoC in the Roman Empire (you can see my review of that here). But you could also argue that H.P. Lovecraft's Dreamlands (1st, 2nd & 3rd Edition) represents a very different take on the Mythos- with other sources for fear and horror. Other time periods are less distinct- Cthulhu Now and Cthulhu by Gaslight 3rd Edition. Cthulhu Rising and End Time both offer future takes on CoC. Then there's the alt-history Steampunk version given in Queensguard. Perhaps some groups might even want to play as cultists using Dark Mirror. Is there any genre that doesn't benefit from the insertion of Cthulhoid tentacles? (Laser Ponies or Bunnies & Burrows perhaps?)

3. Over the Edge (1992)
Over the Edge's a game I don't consider explicitly horror, but which offers horror themes as one of many approaches. Looking through the various OTE adventures suggests writers touched on horror, suspense, and terror themes more than the classic spy and conspiracy elements from the core rules. Al Amarja has elements of alien horror (the Kergillian Conspiracy), supernatural (Satanic Conspiracies), and scientific experimentation gone wrong (the Boradcast Drug). Gamemasters can head in several directions- directing groups more as troubleshooters and runners. But I think the game setting lends itself to horror stories strongly. Over the Edge is about being a fish out of water and facing things you can't explain. You're trapped and pursued and out of your league. That's a potent cocktail for fear.

4. Mage: The Ascension (1993)
I left Mage: the Ascension off my original list because I'd never thought of it as a horror game first. Unlike the other oWoD lines- Vampire, Werewolf, even Wraith, it seemed to have another purpose. This was a game about personal ascension against authority- authority being defined as society, the adversarial Technocracy, your elders, and even reality. Certainly a lot of Mage's later materials for the second and revised editions follow that approach. The Revised versions of the Tradition Books and the Mage Storytellers Handbook (Revised Edition) play with that much more. It becomes more of a philosophical sci-fi game, playing with reality in a PK Dick or metafictional way. But at least one commentor said that they'd always seen and played Mage as a horror game. Looking back, there's lots of material in the early line turned towards that end: crossover books, The Book of Shadows: Mage Players Guide, and The Book of Madness (1st Edition). I think WW pitched it that direction at first but as the game line evolved, different hands steered it in a slightly different direction.

5. Spooky: The Definitive Guide to Horror Gaming (2001)
In my searches a couple of generic books oddly ended up absent from my list because they didn't pop up under gaming material. Spooky: The Definitive Guide to Horror Gaming, for example, comes from the publishers of QAGS, but is system neutral and convertible. It presents a wide-scale guide to horror games. Spooky breaks into two parts- the first focusing on playing in a horror game and the second on running one. For a really thorough review of this, please see Ideal for a Horror Adventure, Good for a Whole Lot More.

6. Mortal Coil (2006)
Describing itself as simply "a supernatural role-playing game," Mortal Coil doesn't have to be horror, but it offers a deep bench for that genre. The game itself is a toolkit for building any number of different fantastic games. Players and GM collaboratively create the setting, tone, and world they wish to play in. Together they craft a theme document defining elements within the story. As you can imagine when tossing around supernatural concepts, horror rises up to the top. Several horror-focused campaign frames have been released for the game. More Things in Heaven and Earth: A Campaign Frame Compilation brings together many of those.

7. Panty Explosion (2007)
A pretty dire oversight on my part, Panty Explosion is the game of psychic schoolgirls. While not strictly horror, it certainly aims that way. Characters deal with both life and monsters. Many anime (hentai and otherwise) present these kinds of characters battling the forces of darkness. Those stories can be more or less dark. For cinematic versions, think Momento Mori, Blood: the Last Vampire, Machinegun Girl, and the creepily effective House. In video games, there's Clock Tower as inspiration. The original Panty Explosion has a striking and dark cover. The new Panty Explosion Perfect looks much more cartoony, and less interesting to me. That's an odd design choice, but it may be intended to open the game up to a broader audience.

8. The Day after Ragnarok (2009) and Others
Ken Hite:
There are several excellent Hite horror games present on my history lists, but a number ended up dropped for various reasons. The Day After Ragnarok is one that probably should have been on that list. It is an edge case- aimed at action and pulp. But it also presents a unique take on survival horror with an alt history and supernatural bent. You can see my review of it here: Götterdämmerung Now. For more sources of alt history and horror see Hite's more than excellent Suppressed Transmission: The First Broadcast and Suppressed Transmission: The Second Broadcast.

9. Cthulhu Vice (2009)
Generally I left self-published, web-published or amateur publications off my lists. But I have to call out this concept as the greatest genre mash-up I can imagine: Miami Vice meets Call of Cthulhu (using Savage Worlds). The subtitle is "Neon-Nightmares in a Neo-Noir Pastel Paradise." And of course we're not talking a real-world version of Miami, but a crazily artificial one created for television. That means you can play up all the tropes and stereotypes to the hilt. My wife's reservation is that she never wants to play a Lovecraftian horror game in which the characters go around in less than optimal footwear. Flip-flops vs. Fungi. 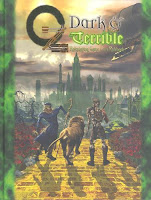 10. OZ: Dark & Terrible (2010)
I'm putting this here in hopes that someone can give me a better sense of how dark this setting is. It does seem to be a grimmer and more adult version of Oz. We've seen other rpgs for Oz (Adventures in Oz: Fantasy Roleplaying Beyond the Yellow Brick Road for example). There have been adult reimaginings as well in comics, television, video games, toys, and movies. We've also seen other children's stories turned into horror rpg fodder (Grimm, Wonderland No More: Adventures in a Wonderland Gone Wrong). So the question is how much this game is simply gritty and how much it actually goes for horror? I can certainly imagine it done creepily- which may say more about me than the product.

11. Mississipi: Tales of the Spooky South (2011)
A french rpg, the website (with a Google translation and a couple of fixes) states:

"United States, 1920. The Ku Klux Klan opposes whites to blacks in Mississippi and Arkansas. Prohibition opposes federal bootleggers and mafia groups still present in Louisiana. But on the banks of the Mississippi, it is another battle that is playing. The Devil extends its darkness over the region. It is said that the Quimbanda branch Evil Voodoo, agreed with him. Soon, together they will reach their goals. Unless ... Anonymous heroes stand against this danger. In them, they are Bluesmen, capable of exorcising demons. Do not take lightly the folk song which tells of the coming of the Devil to Georgia, his proposal to a musical duel with a genius violinist, and his offer of a fiddle of gold against his soul when defeat. This song says at the end, the devil was defeated. Humiliated, he vowed to return for revenge. It also talks about music and pact of friendship and adventure, demons and spirits of Voodoo ... This is the Legend of the Mississippi: the Tales of the Spooky South."

Not sure exactly what to make of that. It reminds me a little of Hoodoo Blues the Role Playing Game. I have to wonder exactly what the players do in such a game and who they are.

12. Shelter In Place (2011)
I don't LARP- but I admire the creativity and effort that goes into such games. The closest I've ever come to that has been an AMBER Diceless Role-Playing Throne race I ran with a large throng and the session of Grace Under Pressure I ran with several rooms. Shelter in Place is a recent LARP for playing out the zombie apocalypse. Players can begin as zombies or surivors. The game includes a mechanic for tracking and raising tension among the remaining humans as civilization crumbles. It looks like a pretty interesting and doable game- I may have to track this down. It would be fun to put together as an event.