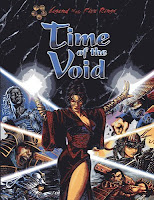 Continuing on with my work getting ready for an L5R campaign. Below is the material I sent the players so they could start considering their characters. This tags on to the end of the previous campaign and explains what happened after the final scene. That was essentially a different version of the Scorpion Clan Coup, with the Nothing in the driver's seat. The destruction of that force rendered most people's memories of the event hazy or absent entirely.

THE DAY OF VOID

It has been almost three years since the event known as The Day of Void. On that day, Hantei the XXXVIII was murdered, and yet no one was punished. The Imperial capital of Otosan Uchi burned and many died, yet blame could not be laid with any certainty. Somehow memories of those days were fragmented, bent, and even erased entirely. The few who recalled events gave testimony. And yet those testimonies contradict and repudiate one another. Some claim they saw the death of one person though that person still lived. Some spoke of rescuing a friend, but that person lay dead. Some claim the Shadowlands marched upon the walls, while no evidence of taint can be located. Battles, duels, betrayal, siege- all of these things cannot be confirmed. Even the physical evidence and voices from the kami seem at odds with one another.

What is known and what is suspected are two different things. The inner circles have spoken of the Shadow, a corrupting and changing force which manipulated events. The destruction of this force, a thing forgotten since the creation of the world, caused the ripples and conflict within the world. It had been a thing of deceit and so left a legacy of uncertainty and fear. Some say it even changed the land itself, a rumor quickly put down by reference to the Emperor’s maps.

Many fell at Otosan Uchi during that period- much of the Imperial Legion, many visiting Scorpion troops, forces from all of the other clans. Some died there, it is said, while others simply vanished across the empire. The Hantei died from a sword-stroke, but no one can saw who brought him down. Other great heroes of the empire fell as well: Akodo Torturi, the Lion Clan Champion; Toghashi Yokuni, the Dragon Clan Champion; Bayushi Shoju, the Scorpion Clan Champion; and Doji Satsume, the Crane Clan Champion. Others of renown fell as with Mirumoto Hitomi; Doji Hitori; Bayushi Dairu; Soshi Bantaro; and many others. The Scorpion, Lion, and Crane suffered the most losses- troops, samurai, courtiers, and others devastated. The Unicorn, Phoenix, and Dragon suffered significant losses as well, with some families such as the Togashi bearing the brunt. Only the Crab suffered minor losses, which they have needed in the days since then- as the Shadowlands has been increasingly aggressive and dangerous.

The Fortunes managed to protect the young Imperial Heir, Hantei the XXXIX. He found himself in the Phoenix lands with no memory of how he had come to be there. With wisdom, he quickly turned aside his desire for vengeance when the full magnitude of the situation became clear. Despite accusations from clan against clan, he declared a general amnesty- producing a blessing from the Kami Togashi. He revealed that the Kami had sacrificed himself to save Rokugan and seal the Lying Darkness. The Emperor recognized the efforts of the Mantis in his rescue, although he did not know the details, and promoted them to Great Clan status once more. He set forth a plan to rebuild Otosan Uchi and focused his energies. In a move calculated to protect the weakened Scorpion, he took Bayushi Kachiko, widow of the Scorpion Clan Champion, as his bride.

THE DAYS SINCE
The Empire has slowly begun to restore itself in the three years since. However rumors, hearsay, and speculation has led to tensions between the clans. Skirmishes and wars have erupted in nearly every season. The Emperor has been occupied with the rebuilding and establishing of his dynasty, leaving the daimyo a free hand. At the same time, the Shadowlands have risen with a force not seen in centuries, some speak of dark monsters in the Shinomen Mori forest, and Bloodspeakers have been caught across the realm. The recent war between the Lion, Scorpion, and Unicorn was among the bloodiest and costliest, threatening trade, commerce, and the sustenance. The Dragon had remained quiet in their mountains for generation, but now took action. With a devastating strike, they marched forces in and seized lands bordering these three clans- creating a meandering border province. Clan Champion Togashi Hoshi petitioned the Emperor, calling on the favor owed to the clan for the kami’s sacrifice. The Emperor agreed to recognize the region as Dragon Clan lands, in exchange for other concessions from the clan. The Unicorn and Lion raged against the decision, but could not openly dispute the Emperor’s will. The Scorpion Clan remained silent on the matter. The new lands of the Dragon were split among three daimyo, one from the Mirumoto, another from the Agasha, and the third to be given over to a new family created and anointed by Togashi Hoshi to honor this daimyo’s efforts and heroic actions.

While you are of the Dragon Clan, you have not necessarily trained there. In Legend of the Five Rings, there are ‘roles’ rather than locked in character classes. Once you have chosen a role, you then choose a “school.” Schools refine your training and experience and offer different abilities. Some samurai-class students train at other schools and then return to their own clan- since you’re PCs you are exceptional and will have a chance to do that. It is also possible to train at two schools- but such a choice will cost all of your bonus picks and you will only be able to advance in one of the schools during play. I will present a list of the different clan schools and a brief description of their focus. In thinking about what you want to play, consider that each of the major roles- Samurai, Shugenja, Courtier, Monk can be built in different ways, with different aspects. Here are some examples (not necessarily covering everything).

HOW DOES THIS WORK PRECISELY?
You’ll be building your character with points, as with most Action Cards rules. Your character will be built on your deck (results assigned, edges, and unique cards); your skills (which allow redraws); your aspects (descriptive traits); mechanical details (stress, honor); and talents/flaws (special unique abilities, ancestor blessings, etc. bought only at character creation). Beyond this are the Clan Schools which offer school techniques. Each has five ranked techniques which must be bought in order. You start with the Rank One pick and can buy more during character creation or in play. You also get some free skills for taking a school.

Here’s what I want you to do:
Below you’ll find a list of the Clans and their schools. For each I’ve listed at least three keywords which reflect the kind of stuff they do and kinds of School techniques they get. In some cases I’ve listed some variant paths under a major school; these are the same as the base, but with one technique swapped out for a new one. Look through and see what interests you. Select up to three that you might want to play. You can choose fewer if you know what you really want. If you want to spend all of your bonus picks on two schools, tell me and we’ll discuss that. I’ll allow up to two people that chance, but they’d better have a good story. Once you’ve picked, I’ll write out those abilities. This is a means of reducing my workload, so I don’t have to create all of the School stuff at the start. Feel free to ask questions or discuss among yourselves what you want to play.

MONKS
These can come from any clan, although some have a stronger focus than others. The Brotherhood of Shinsei accepts all. The first two listed here use kiho, which are elemental activated powers. The third is purely physical.
Inkyo “Enlightened Monk”: Shintao, kiho element specialty, and meditation.
Wandering Monk: Pleasant interactions, kiho, and concentration.
Sohei Warrior-Monk: Martial arts, physical feats, and endurance.