Empire in Flames: Reading Warhammer's "The Enemy Within" Campaign

THE ENEMY AT THE END
Empire in Flames is the final volume in The Enemy Within Campaign. I’ve reviewed all of the other pieces, and I’ve put off drafting this assessment. I really love where TEW starts and it bothers me that this story concludes it. The bottom line is that Empire in Flames disappoints. And it’s a different disappointment than the previous volume Something Rotten in Kislev. SRiK was an interesting and dynamic set of scattered adventures shoehorned into the campaign. It went on a strange, out of place sidetrack. Most of the problems I had with it stemmed from that. As a module, it was pretty cool and worth playing. I can’t say the same of Empire in Flames.

First- YCMV- “Your Campaign May Vary.” I’m sure GMs can craft an impressive campaign and series of adventures from this book- but they have an uphill struggle. That success will be based on the skill of the GM presenting this and buy-in of their group, rather than the story presented being compelling or interesting. I’m not a big purchaser of modules; I prefer sourcebooks. All of the earlier pieces in this series offered both engaging narrative and rich background. EiF doesn’t. It is more of a classic straight-line module, a significant shift. I’d heard that Something Rotten in Kislev got jammed into the campaign series at the last minute, and a couple of commenters on my review confirmed that. I’ve also heard that Empire in Flames had production or editorial problems- but I don’t know the specifics. I’m going to wait to look into that until after I’ve written my impressions.

PRESENTATION
Empire in Flames is a hefty hardcover, coming in at 148 pages. It is strangely smaller than the other volumes in the series, which I believe were A4 size. The pages here are 8”x11”. That’s a small point; it says something unflattering about me that series inconsistencies like that bug me so much. The cover is also bright, bright yellow. Now don’t get me wrong- when I play boardgames, yellow is my color. But man, that is bright and kind of weird- especially in contrast with the front and back cover images. The interior text design is ok, but another change from earlier volumes. There’s a slight shift in font and size which doesn't read as nicely. EiF looks dense and there’s a reliance on italics for emphasis constantly.

The book draws from the usual stable of excellent Games Workshop artists. In fact many of the illustrations appeared in earlier books in the series. I stopped counting after the first dozen reuses. The new art is ok; I don’t think Colin Howard’s work is as strong as the others, for example. Overall the feeling I get reading through the book is messiness- as if GW really wanted to get this assembled and out the door. It is still decently put together, but not as amazing as the other books in the series. The thing I find weirdest about this is that Carl Sargent wrote it. He created Power Behind the Throne and many other amazing rpg products. 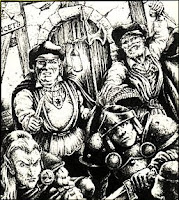 Princess escort. The Emperor dies. You’re assigned to get a magic artifact to mark the new emperor and prevent chaos. You travel and dungeon-crawl to get it. You come back in the middle of a battle and the item finds the new emperor. You’re asked to be a messenger and then a demon pops out in the middle of the coronation. You punch it and win or you punch it and die.

I may be simplifying things a bit.

1. NO, YOU DON’T GET TO ROLL
“Empire in Flames is not an adventure like Power Behind the Throne. In PBT the PCs could try any one of dozens of approaches to get at the information they needed. This is an adventure with a linear plotline. Here, there are clearly defined adventure episodes and clear goals.”

That’s on page one. This is an adventure where you go from point A to point B. Either you succeed at the next checkpoint and move on, or you fail and hit the ending. The module includes many vignette pieces to distract players from the fact that they’re on rails. But most of those don’t have a real bearing on the main plot. Throughout the book you see phrases like ‘players should realize their only choice,’ ‘one course of action will present itself,’ and ‘nothing the PCs can do…’.

2. THE DRAGONLANCE PROBLEM
I’ve often heard gamers who dislike “story games,” point to the Dragonlance series as the place where things went wrong. They believe that instead of an adventure, those modules encouraged a certain kind of railroading- a chance for the GM as frustrated novelist to lay things out on paper. I don’t know if I agree with that specific assessment since it is often used to excoriate any kind of plotting and incident in adventure writing. But Empire in Flames does feel like that to me. It is as if a team sat down with this question: “What happens in the Empire?” Then they wrote out the history and detailed the roles and actions of the Great Men in the setting. They drafted a novel set in the Warhammer world. Only once they did that they asked: "Wait, what do the players actually do in this?" And they tacked on some bits for that.

3. I LIKE TO WATCH
The players have little control at crucial points. In just about every key and interesting moment, they’re observers. If they can act, it is usually after the fact. Or their actions are defined as having no real impact on the course of things. In many places you have extensive dialogues between multiple NPCs (all in italics) where they talk and talk. It is like a screenplay. There’s nothing player love more than to watch “cooler than thou” NPCs make decisions and drive the action.

4. WHO WERE YOU AGAIN?
The plot hook coming out of previous adventures is that the players are made Knights Panther and sent to Talabheim and then Altdorf. That makes at least some sense if you come from Power Behind the Throne. Little consideration is given to the impact of the events of Something Rotten in Kislev; you essentially put the PCs in the same place and ignore anything coming out of that arc. But even more there’s little sense that anything the players did in any of the earlier modules has any bearing. It just isn’t taken into consideration at all.

5. FROM CoC TO D&D
The earlier adventures in the series are all mysteries. They borrow heavily from Call of Cthulhu, with the players slowly uncovering, tracking down, and shattering chaos plots within the Empire. Hence the name of the series, The Enemy Within. You have subtle horrors, tough choices, variant paths, and the players putting together the pieces to come to a solution. Even the odd-man-out- SRiK- is at heart a series of mysteries and puzzles. Say goodbye to any of that here. For the climax they throw away all of that in favor of an old-school cross-country adventure with no mystery. Or at least no mystery you actually have the opportunity to solve.

6. UNLIKE MAGELLAN
The adventure doesn’t gel. In earlier TEW modules, incidents and encounters played into the larger story. If you ran into someone, they could appear later as a resource, plot hook, or enemy. If you had a fight, it revealed something about the plot, offered a clue, or showed the players some aspect of the world & background. Here they're more often speed bumps or distractions. That’s especially a problem if the group has been trained that incidents are meaningful. If you start throwing a bunch of weird stuff at them, they’re going to bite down hard and not let go. You run the risk of bringing the pacing to a halt. All of that isn’t to say that what's on offer isn’t cool. Sargent offers some really interesting bits, concepts, and scenes- they just don’t connect with one another.

7. MAGIC!
One of the things I appreciate about the Warhammer world, at least as it has been presented earlier in The Enemy Within has been the relative scarcity of significant magic. It isn’t exactly a low-magic world, but magic has been rare and dangerous. Consider that Power Behind the Throne turns on two key ‘magic’ innovations to run the plot: hypnotism and a doppleganger. That works because they’re unusual and cool devices and feed the mystery. The players don’t think, “well it can be anything because there’s all this magic around.” There’s much more of that in this book- with tons of chaos cultists, magic monsters, demons, flying carpets, and such. It breaks the tone established earlier.

8. COMBAT!
There were combats in the previous adventures, that’s for sure. But they played into the story. They were challenges- with implications and choices. Some required careful planning and management to deal with successfully (consider the climax to Shadows Over Bogenhafen). Here we have many combat encounters, with many feeling like filler- in contrast to the earlier volumes. We also have an extensive dungeon crawl. Now that may fit better with some group’s playstyle- but I suspect if they played through the rest of the series, that won’t be what they’re expecting or comfortable with.

9. YODRI/YORRI
Here’s an idea. If you have two major NPCs- especially ones who appear late in the story in different places – DON’T MAKE THEIR NAMES NEARLY IDENTICAL. Don’t do that especially if they happen to both be important members of a particular faith. And both be connected to the big bad (killed by it, possessed by it). There’s clearly no actual relation/connection between these two, one’s a semi-immortal Dwarf avatar and the other’s the human high priest of Sigmar. As an additional problem in this, the book says that more information on Yorri can be found in the profile section. No it can’t. There’s no info on him there.

OVERALL
I never ran past Power Behind the Throne, in part because I disliked EiF's set up so much. There are some interesting ideas, but I think they fit with a radically different campaign. The Enemy Within deserves a capstone that fits with the earlier material and makes the group’s earlier decisions and successes matter for the later game. It deserves a mystery, a tough one with the potential for interesting failure and fallout, rather than having to simply reload from a save point. I’m sure GMs have run this and had a good time. But I suspect that’s coasting on the goodwill of earlier volumes and skilled GM effort, rather than any strength of this module.