The L5R 4e Resource Guide: The Way of the Dragon & Honor's Veil

THE L5R 4E RESOURCE GUIDE
The set-up of the new 4e L5R more easily allows the use of materials from earlier editions and eras. That raises the questions: which of these products should an L5R 4e GM bother picking up? Which of them offer new insights into the pre-Clan War period (and beyond)? Which of them offer more universally useful setting material? This series aims to answer those questions. Note that I leave aside any and all mechanical material and questions for purposes of these reviews. 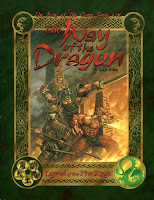 THE WAY OF THE DRAGON
This volume kicks off the “splat books” for Legend of the Five Rings. I find it more than a little odd that they choose to go with a clan I usually think of as more marginal and even difficult to play. I would have expected Crab or Lion first out of the gate. On the other hand, the Dragon’s isolation from the mainstream of Rokugani life does mean that they have more time to establish that before delving into the darkest corners with the splat. With the splat series comes power creep- familiar to D&D, classic World of Darkness, and Warhammer 40K players for years. While that still exists to a lesser extent in the new 4e books, you can see it much more clearly in the "Way of..." and later series.

So it is excellent that I’m not even going to consider any of those mechanics or rules. Most GMs won’t be looking in these books for that kind of material (I hope).

A word on the presentation. All of the “Way of…” books are decent sized perfect-bound softcovers. This one comes in at 112, though some of that is taken up with ads and full page art. The illustrations are a mixed bag. It feels like the AEG team is still getting their sense of how they want things to look in these early volumes. Some images are striking, but many are messy or weak. The fighting section and the images therein clearly owe inspiration to Adele Westbrook and Oscar Ratti’s Secrets of the Samurai. Some of the other art is clearly trying to emulate classical Japanese art styles, and not so successfully. John Wick pens this volume in his usual smart and breezy style. The book maintains the L5R pseudo-three column text design: two main columns, plus a grey-scale sidebar that has occasional text. This is much lighter and less intrusive than in the core book. Way of the Dragon went through a couple of printings, with later versions correcting some errors.

The book offers five chapters, with a series of five additional appendices with essays on general topics. Two of the chapters don’t offer much beyond mechanics. The chapter on building Dragon characters is mostly taken up with new schools, merits, etc. It does offer Dragon-specific heritage tables, but there’s nothing there which couldn’t simply be built easily by a GM. The chapter with sample characters could be useful through providing the background for four potential Dragon-Clan NPCs.

On the other hand, three of the chapters offer useful setting material. The overview chapter on the Dragon nicely compliments the material from the 4e core and Great Clans books. We get material from several different viewpoints, which works especially well here. WotD includes many sayings of the Ise Zumi- a nice touch and a useful resource for GMs. Chapter two, the longest in the book, goes through each of the families of the Dragon in detail. This echoes material from the Great Clans book but offers a number of new takes, details, and sidebars. This is really useful for a GM planning to run in this period. The discussion here doesn’t just cover the families, but also topics related to them such as the philosophy of the sword, military rankings and structure, enlightenment, and so on. Notably this book actually presents images of the individual family mons, something missing from any 4e sourcebook (especially The Great Clans, where they're described but not illustrated).

Chapter Four offers write ups for ten important Dragon Clan personalities of the era. These offer extensive background and discussion of motivations. Many of these characters aren’t covered in other 4e books. GMs going back to these books for 4e resources overcome one of the initial problems of them. These sourcebooks mixed player and GM-facing material all over the place. On the one hand, players obviously wanted the book for their clan. On the other hand, if they had it, they would see a lot of great material which would be better GM-only. By that I mean they would be a cooler reveal at the table than in the reading.

Finally the book presents a number of wild card articles. One of the nice touches with the Way of series would be the integration of certain general L5R topic into the volumes. Way of the Dragon presents three pages on literal Dragons, three on Kaze-do, and four on magic of the Clan. Much of this focuses on mechanics. Better and more useful are the four pages of adventure hooks specifically for the Dragon Clan. Four more pages cover the lands of the Dragon (much of this can be found in The Emerald Empire, but this shows the lay of the land in this First Core period). The two page layout of Mirumoto Castle is nice to have as a typical example. The book wraps with some CCG junk, character checklist, advertisements, and a Clan specific character sheet.

OVERALL
There’s obviously a good deal of duplication between Way of the Dragon and the 4e core, The Emerald Empire, and The Great Clans books. But I believe there’s enough unduplicated material and novel presentations to make this a worthwhile purchase for GMs looking for First Core setting and general L5R material. 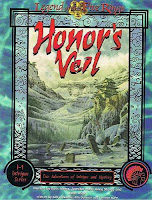 HONOR’S VEIL
With the exception of a couple of small quick-start booklets, there are no proper “modules” for Legend of the Five Rings past the early second edition period. I suspect that speaks to the difficulty of creating modules easily slotted into diverse campaigns. It also probably says something about the economics of selling RPG supplements (though Pathfinder, for example, suggests that’s not the case). Actually a PF style campaign series of modules could be very cool. That means that the best resource a GM of 4e has for complete adventures comes from the earliest editions.

Using modules for previous version of a game system is a time-honored tradition in gaming. It poses several obstacles for the GM however.

The question of mechanics is the least important. A GM can easily retool any stats or powers. Even vast differences (say original D&D and D&D 4e) can be fudged. More difficult are the key context elements. Does the module have details it relies on which don’t exist in the later edition. For L5R that could mean presence of the Scorpion during a time when that family’s in exile; the existence of the Toturi Dynasty; or the use of the Nothing as an adversary. If the story/plot turns on these concepts, retooling may be more work than it’s worth.

Lastly there’s the classic question posed by every module: does the set up given here fit with my current campaign? Does the adventure take place I the Shadowlands when your party are magistrates in Phoenix territory? Is it a diplomatic and investigation scenario when you’re running a group of Crab defenders? Can the location or concept be retooled and how much work is that going to require?

Honor’s Veil contains two short adventures. This is the first in the “I” or Intrigue series for L5R adventures. Copying TSR, AEG clearly hoped to have some thematic lines for the adventure modules. It is a good idea- but generally just about every L5R adventure ended up as a mystery story. Incidentally, if you have two adventures in a book, make the title of the collection different from both to avoid confusion. Both stories here revolve around questions of honor and are really most fit for the Magistrate campaign (which would weirdly end up being the default for many campaigns). The module itself follows the standard practice of the day: a saddle-stapled 48 page booklet, plus a separate cardstock cover. Usually that would have maps on the interior, but instead here we get investigation flowcharts for both stories. It looks a little like GUMSHOE investigation planning, but more linear. The interior illustrations are good and could be shown to the players for reference.

Both adventures have relatively little combat. They feel like smartly developed convention scenarios.

Murder at Kyotei Castle (5-22) takes place on the lands of a vassal family of the Crane. The area needs to be close to the Crane and Phoenix. This particular arrangement could be switched, working decently with another on the heartland clans. It begins with the murder of this notorious and aggressive vassal daimyo, sparking concerns from several families. The set up has the players at the castle at the time, on their own or as members of an entourage. That’s a classic fictional conceit- that investigators happen to be on hand when the murder occurs. It wouldn’t take much work for them group to simply be called in if they’re magistrates nearby. On the other hand, this might also be a solid starting adventure (say after one of the tournament scenarios) where the players get appointed as special investigators and prove themselves worthy of a regular posting.

The actual story has plenty of room for investigation. The physical locale of the castle, local gossip, and colorful NPCs all serve as ready sources. There’s plenty of room for the PCs to maneuver (and screw things up). Several pieces of interesting details add to the utility (fashion, geishas, justice). The resolution of the story puts the PCs in a somewhat damming position, but with choices.

Honor’s Veil (23-36): Would be much better if the interior cover image for the adventure weren’t so bad. At first this story looks close to Kyotei Castle, but it has a much more linear structure. This one takes place within Lion territory, but it wouldn’t take much to switch the Clans around. The one key detail is the involvement of the Scorpion in the situation. The story begins with the vanishing of a Crane and Scorpion samurai, with the suspicion that they ran off together. The players much find out what happened to them. This offers a classic PCs as magistrate entry into the events, but other connections could get them involved. The puzzle presented here is interesting and the NPCs on offer really quite fun (and easily reused).

The booklet also has six pages on Poisons in L5R, much of this being mechanical notes on their use. Two pages have collected images for all of the NPCs in each adventure (a nice touch). There are also four pages of floorplans and maps. These could be easily repurposed.

OVERALL
Two solid L5R adventures, easily used in the First Core setting in different locations. The adventures are generic enough to be moved to nearly any period. Worth picking up for the GM of any era.