Changeling the Lost and FATE 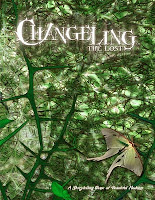 COMING INTO THE HEDGE

This week I wanted to put together some pieces on Changeling the Lost, my favorite of the nWoD settings and possibly my favorite game from WW. In 2008, I took a look at CtL and wanted to run it. But I didn’t want to learn nWoD- I wanted a system I knew for the f2f game. So I worked on a conversion to our Action Cards system. I did a fairly literal hack- making sure I had all the details from character creation. I converted all of the contracts- probably the part which took the longest. The campaign went well, except for a couple of player hiccups. But the system worked in part because the longer we went along, the more I hand-waved concepts. I also ended up wasting a lot of time and energy putting that hack together- trying to keep everything from the original.

Last year I decided I wanted to try to run some more online. I’d developed some ideas I wanted to try in a new campaign context. Running online meant playing with new people and trying to establish an easy baseline. Since most of the players knew it, I opted to run this campaign using nWoD- as much as anything to see what people actually got out of the full system. I believe GMs should stretch themselves from time to time- running systems they might not ordinarily try out.

MY WORLD OF DARKNESS
So I’ve run 20+ sessions of nWoD…well, not exactly. I’ve probably really actually run “Baby’s First” version of the game. I have to admit that. The system has a high rules density, but at the table I play it pretty loose with mostly the basic rules. Those work decently, primarily because I ignore the chrome like lots of modifiers. My problem with the game is the rule density. Everything feels like a strait-jacket. You have wonderful ideas and concepts, but then tons of mechanics and systems to handle those. So you’re left with a couple of options. Either ignore and streamline those, as I’ve normally done or else play with a highly granulated and IMHO highly restrictive set of rules requiring significant referencing.

For the last twenty years, I’ve been running increasingly easier and more streamlined game systems. That’s not to say I haven’t run some crunchier things in the meantime, like D&D 3.5. But in most cases, I’ve set aside complex games I used to invest in heavily: Champions, Rolemaster, and GURPS. In the case of the last two, I’d been cutting out rules and sub-systems for those games- focusing primarily on the core resolution system and trying to make the rest of the game flexible. A chunk of the campaigns I’ve run have been our homebrew rule-lite system Action Cards which is probably closest to FATE at this point. But I also ran a good deal of Storyteller- Vampire, Exalted, and hacks for L5R and Wushu.

I don’t think nWoD’s is necessarily a bad game- it works for aspects of the game that I’m less interested in. I like the core resolution mechanic: skill plus stat to form a dice pool is decent. But the problem lies in how that becomes elaborated in books beyond the core. When I ran ST from the book I worked to become proficient and fast at resolving combat and skills. For chrome elements, I concentrated on cool things the bad guys could do in the system. But the complicated parts- magic, powers, charms, talents, whatever- I left in the hands of the players. I let them use, declare, and explain how these details worked at the table. That reduced the rules competency I needed. I still made rules calls based on logic, primarily based on GMing experience, rather than an encyclopedic knowledge of the game.

But I have an opportunity right now with the online game. We just had a couple of players bag out, but the remaining ones would like to continue to play. We have one previous player who I hope will also be returning, and I may hunt down a couple more to round out the table. One of the remaining players is getting married this month so we have a couple of weeks we’re going to skip. That gives me plenty of time and a good break to consider switching the campaign over to another system. The most likely candidate for the switch would be FATE.

CHANGELING TO FATE
So how would I do things today if I wanted to convert Changeling to another system? Obviously I’d want something simple, where powers and such can be easily described. For the moment the easiest option would be FATE. This time I’d avoid going down the route of writing up all of the Contracts and Kiths. The problem with sticking to those lists and options is t I’d keep two things in mind based on my past experience. First, don’t worry or even bother to translate everything. Too often in the past I’ve wasted effort on full rewrites. These either hogtie my options or simply don’t get used (see my work on Scion, L5R, and my earlier CtL hack). Second, include those mechanics I enjoy even if break some of the symmetry of the system. If it’s going to be a set of house rules, then make it rules for my house.

Aspects: Players would begin with the standard four aspects. One of these would relate to either their kith or seeming. One would be their trouble aspect- essentially built on their character’s Virtue/Vice, whichever seemed more important to them. The other two would be more open ended. If we’re converting from an existing campaign, then I’d ask the players to build one of the aspects based on campaign events. The other they’d be free to choose. If we’re starting fresh, then it depends on the set up. If we’re playing fresh-from-the-Hedge changelings, then the standard Fate collaborative set up might not work as well. Perhaps I’d figure out a way to tie that into the world-building process.

Skills: For this conversion, I’m building on Fate Core, rather than FAE. The latter is excellent and could also be used. I’d likely go through and pretty closely convert the Changeling the Lost skill list over. A few I’d drop, to get to an ideal number closer to two dozen. Where possible, I’d link those to the Fate core list. Those offer simple and tight options, plus there’s the advantage of having the Stunt list already. A bigger question would be whether I’d use the Skill pyramid. That often stumps players when I explain the game. If we’re converting over, then I drop that concept. If we’re starting new, then I’d use it.

Contracts: The “powers” of the game, these make the game mechanically distinct. In the past, I spent time working through all of them. Screw that. Even writing up the contracts lightly, you still end up with a particular read on them and a more limited sense of what they do. As I mentioned above, there’s a break that moment when you tell me my Contract can animate objects and then you read me the full page of rules text limiting that. Instead, we’ll make up a list of the existing contract sets and a one sentence description of what they do.

When players buy a contract, they get to decide how they want it to function. Each contract can be an Aspect, a Stunt, or a Gift. At any time during a scene, changelings may decide they wish to begin using contracts- if they do so they spend a drama point as an overall initial tax. After that, they may use any and all of their contracts once for free for the scene. If they wish to use one a second time, they must either spend a drama point or make use of a catch.


Contracts would be generally purchasable- with some restrictions. I’d have to figure out how to handle that. Perhaps they’d need a learning experience to buy a new one or have to do something in game. This approach has several advantages. First, I don’t have to write everything up. Second, two players could have the same contracts but define them slightly differently. Third, it would be dead easy to make up new contracts. Fourth, it brings back surprise and uncertainty to the game. Players couldn’t be sure what powers other Changelings possessed.

Limitations to this? Obviously it requires the GM to monitor the players’ suggestions. The GM would also want to price things such that the PCs don’t simply invest in contracts to the exclusion of all else. A simple restriction like the concept that multiple aspects have to come from different areas could balance this as well.

Standard Stunts: Players could also purchase regular stunts if they wanted, with the normal costs and restrictions.

Stress: Changelings would have three stress tracks: Clarity, Social, and Physical. Clarity covers all mental damage: fear, rage, alienation, and so on. All of the classic nWoD business about phobias and such would be handled with consequences. Social stress would simply be about rank within Changeling society. Manipulations and trials could be more easily be played out. Social consequences might involve making promises, being forced into bargains, or getting the short end of a pledge. Social damage might heal quickly, unless the opponent chooses to permanently reduce the victim’s rank.

For the Physical damage track, I’m of two minds. On the one hand, I appreciate the simplicity of the Fate one roll determines hit and damage system. On the other, I like rolling damage (as I mentioned before). I know it seems weird to add granularity here, but I might try to figure out a method for rolled damage and increase the number of boxes on this stress track.

Everything Else: So what would I need to work out? I’d probably have to figure out how Pledge function if players want to use those. Some elements- like the Hollow and such I’d handle as a collective property for the group, with stress tracks which could be drawn on. If I do a diced combat system, I’d have to work out weapons and armor.

So that’s my first thoughts on that- I have to check with the group and see what they think. We could do a Fate conversion, stick with nWoD, or look at something else (like Action Cards). If we choose a conversion, I want something simple and easy to develop. I want the players to have the chance to define their characters they have in their heads, rather than trying to wrestle that concept into the rules.
Posted by Lowell Francis at 4:30 PM