The Place of Dead Games: Champions 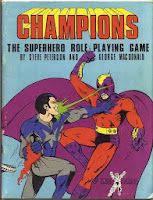 Second in a series on games I loved, but no longer play. You can find Part One: Rolemaster here and Part Three: GURPS here.

ZERO HOUR
By 1981 I’d been playing for a few years. Most of that involved TSR products- D&D, AD&D, Top Secret, Boot Hill, Gamma World- they had a lock on things. They had a few multi-line competitors in Chaosium (weird fantasy and Call of Cthulhu), GDW (Traveller if you liked hard sci-fi), and FGU (complex and hard to get games like Space Opera & Aftermath or oddballs like Bunnies and Burrows). Other companies had one-shot games like the first superhero games. That genre kicked off with Superhero 2044, a terrible set of rules that grabbed everyone’s attention. By the time I started “playing” it, the older generation of gamers had already moved on to Villains & Vigilantes first edition. They played V&V the first time I got to sit in on a session of my older sister’s group. She ended up stuck with me at the game shop for some reason. The group was code-named "Duel" and I rolled up a character, Darkcat, with Claws, Darkness Control, and Revivification. I loved superhero stuff and once I tried V&V I switched to that. But then my sister came back from a local convention carrying a new game she’d seen demo’d: Champions. It didn’t look like any other game out there, it didn’t read like any other game out there, and you didn’t make characters like any other game out there. You built characters.

Quickly- and I mean super-quickly- Champions invaded and split the gamers in my neck of the woods. If you’d been playing supers for some time and you liked story, then you probably focused on V&V. But if you liked crunch, simulationism, detailed combat, game balance, and being able to make exactly what you wanted- they you went with Champions. Over time, the latter won out- with V&V remaining on the fringes as a soft option until Marvel Supers and DC Heroes popped up later. It took me a long time to “get” Champions even though I read and played it repeatedly. I wanted to learn the system because I loved supers. That runs a close second behind fantasy as my favorite genre- and I’m good at running it. That may sound aggrandizing, but I know my strengths . Equally I know my weaknesses- sci-fi, 1920’s Call of Cthulhu, Pulp, or any kind of military game. 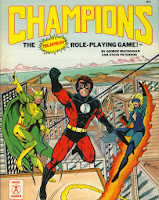 CONTEST OF CHAMPIONS
Champions became dominant superhero game among the older gamers I looked up to and hung out with. They often ran “Open Combats” when GMs didn’t have a game ready. The apparent balance of the system allowed for arena-style fights without a referee. I tried to get a handle on the mechanics- making up characters and running games for my peers. Mostly I fell back to using the various Enemies sourcebooks. College eventually pulled off most of those older gamers and the seed of my group formed. Around this time we began to see variations on Champions- Super Agents, Strike Force, Golden Age of Champions, Espionage and Danger International. This last game really demonstrated the power of the system and became the basis of a number of reskins and variations. One segment of gamers in our area started the Aegis campaign, which would eventually become one of the longest running in the country. I would play in it for a time years later.

Our group split between Champions and DC Heroes. The former became the basis of many serious campaigns, including a Watchmen style game I ran on and off for years. The later became the fun pick-up game of choice. DC Crisis on Infinite Earths drove many back to reading their comics. Character creation could still be a huge pain, but DC Heroes seemed to have faster combat. Eventually the rapid change-over of editions killed off the game for us. Mayfair focused heavily on modules over sourcebooks, which left many purchasers out in the cold. Champions, on the other hand, remained and expanded. 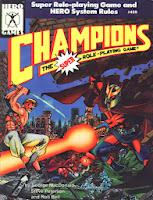 KINGDOM COME
What really put the stake in the heart of other superhero rpgs around here was Champions 4th Edition. It did everything right. With a bright cover by legendary comic artist George Perez and a new complete approach, it brought in new players and reinvigorated old ones. They fixed problems, retooled elements but mostly kept things intact. Creating a distinct line for HERO system also encourage new people to try out the engine. Where GURPS had led they followed. It helped that Champions 4e also had some excellent supporting material, including Ninja HERO and Dark Champions, both of which spawned multiple campaigns in our area. Champions 4e remains my version of the game. It helps that my late friend Barry helped illustrate it. His drawing of a typical gaming group arguing includes me.

You also can’t underestimate the importance of the Heromaker software in pushing the game forward. Champions 4e came out in 1989, and it did well. In 1993 Heromaker appeared and everyone I knew who played and had a computer bought and used it. Eventually they released a deluxe version bundled together with the core book. Heromaker offered the first truly useful piece of software for gaming. There had been DM assistant programs before, but nothing with this utility. Champions character creation involved math, look-ups, and moving calculations. Heromaker streamlined all of that. It showed what computers could offer at the table- assisting with the most mechanically heavy portion of the game.

Hero System broadly, and Champions in particular, powered many campaigns I ran, played in, or heard about in our area. It competed with GURPS for dominance in our groups. At the same time, I saw less and less talk about that among new players. Superhero games, strangely, took a hit in the 1990s in our neck of the woods, despite the boom cycle in comic books. New players moved to AD&D, White Wolf, Deadlands, or Rifts. Gamers with more eclectic tastes went to On the Edge or Ars Magica. You ended up with old blood clinging to the system and new players ignoring it. Despite fantasy, supers, SWAT, and other games happening in it, Champions lost ground. The d20 explosion only accelerated that process. In 2002, Hero Games released HERO 5. Even those of us who enjoyed the system didn’t pick it up. We’d been happy with 4e. 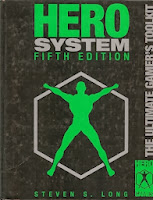 DAYS OF FUTURE PRESENT
But the edition switch isn’t what pushed me out of Champions. For years we’d joked about how long combats took. When I ran, I wouldn’t start a fight past a certain time because I knew we wouldn’t be done with it for at least two hours, if not longer. As well, I just wasn’t as good at Champions as my players. I never managed to develop the expertise they had in character creation, managing maneuvers, and playing the board. They always wiped the table with balanced adversaries I created. When I crafted overpowered villains, they’d still destroy them, but then spend the last part of the session complaining about how unfair the fight had been. Over time I’d gained mastery of other systems, but Champions always smacked me around. Still it did super-powers so well that I stuck with it. The straw for me came in trying to teach the game to a completely new group of people. They’d played other rpgs, but Champions absolutely left them cold. They had played other faster, easier, and less convoluted systems. Even my wife, a database admin and former math teacher became stumped at the table. Yes, we could have learned the game and perhaps in time it would have felt natural, but it would have been a slog. Why should I do that when other, better options exist? Games with fun combat, faster resolution, and easier character creation.

HERO system and Champions changed and influenced gaming. I think that gets lost when people dismiss it as a math exercise. It offered a new and systematized approach to character creation. Melee and Wizard might have had the first point-buy mechanics, but Champions took that in a completely new direction. It broke down the building blocks and gave players and GMs a construction set, the Legos of gaming. Many, many of my favorite moments in gaming come from HERO system campaigns. But most of that comes from general play- not from combats, not from character creation, and not from session prep. Yet we still have several players in our group with an abiding love for the game. It is a great game, but not a great one for me.