The Place of Dead Games: Rolemaster 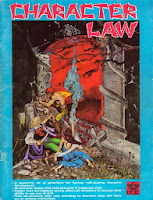 I ALONE TO ROLL MY TALE...
I remember playing Monopoly, Clue, and Life growing up and enjoying them. Until I stopped enjoying them. I played Star Fleet Battles through expansions and editions until I realized I didn’t want to any more. I played Micro-Armor, Napoleonics, and Warhammer 40K but I don’t anymore. And in each of those cases, I don’t have any real feeling of nostalgia- no desire to go back and play it again. It isn’t so much about new games grabbing my attention, but what I got out of those games being less important now. With RPGs, my feeling’s a little different. I can’t think of any rpg I played in the past that I wouldn’t go back and try again- if someone I knew was pushing it. I might do so reluctantly, more in some cases than others. But I don’t have the sense of “Nope, not again” that other games give.

But many things would have to line up to get me to the table for some. I have three game systems I played for years- multiple campaigns, characters, groups, and stories. Then I put them aside. For many people I know D&D would be on this list. But D&D never held on as a solid option. I started with it- learning from the tan box and then moving on to the Holmes box and then AD&D. But I didn’t play anything long term- pick-up games and some modules. I don’t recall ever having a character last for more than a level or two. In high school I ran AD&D briefly, but eventually dropped it in favor of other games and systems. The last time we went back to play it long-term ended up a tongue-in-cheek parody game that lasted for several months. 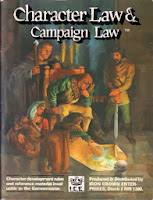 GENERATIONS
In our area, a split happened pretty early. We had a faction of older gamers who’d come out of the wargames tradition to D&D. They saw it as a strategic game of the GM trying to kill the players. We also had a younger gaggle of players who pretty much bought TSR games. But we also had my sister’s age range- a large cohort who tried new games of all kinds and set some of the tastes for the area. That produced a focus on V&V (and then Champions), Call of Cthulhu, and oddly Rolemaster. RM became the go-to fantasy system for people wanting to do more. Still young, I had the chance to sit in and watch a couple of RM sessions run by a GM named Matt Myers. He blew me away with the level of detail, both in world building and rules. I wanted to be that kind of GM- spinning a world that players talked about after the game, with an encyclopedic knowledge of the setting I’d created. I was in Middle School, so sitting in on a game run by these older players (seniors and college age!) had a huge impact.

Not long after I watched those sessions, I actually got to try out Rolemaster. As a system it had some problems. Early on it had presented itself as a set of options to bolt on to other FRPGs. Spell Law, Campaign Law, and Arms Law came out of the early tradition of third party products trying to expand and offer new options. In some cases, they offered new games which looked like old games (Arduin). In others, they presented generic options which could be tacked on…maybe (The Compleat Alchemist). Rolemaster straddled that line. It stood out in presentation with everything printed on parchment-style paper and some books on heavy cardstock. When I actually first played RM I didn’t like it. At first level I had one spell- "Boil Water," which couldn’t be used to actually hurt anyone. 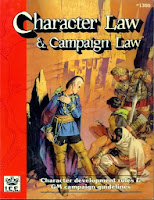 TO THE TABLES
However in high school the first seeds of the steady group I’d play with for the next decade began to form. We had a mix of players my age and four years older. One GM, Paul Dunivent, made Rolemaster his own. He bought up everything for it- the Vog Mur and Iron Wind modules as well as the newly released Rolemaster Companion. Iron Crown had just redone RM in a more accessible approach- not the later red cover edition, but a reprinting and reorganization that made the game feel complete. Bizarrely, Paul combined the high-power gameplay of Rolemaster with the low-fantasy setting of Harn. Somehow it worked- particularly because Paul mostly used it for place names rather than themes. We played a lot Rolemaster, exploiting loopholes in the system and trying to interpret the rules as best we could. A couple of times I played it at conventions only to discover very different interpretations of the mechanics. Our campaigns for the next several years broke into one of four groups- Rolemaster, Superhero, GURPS, and other weirdness (including AD&D nostalgia). We played every Friday and Saturday night on a weekly basis.

All through high school and college, Rolemaster became more and more complicated. Well, not complicated- because you could really make it as complex as you wanted. Instead ICE kept putting out new options and supplements. We bought all of the Rolemaster Companions, of course. But we also bought the Creatures and Treasures books, War Law, Sea Law, Shadow World, the Alchemy Companion, the Arms Companion, Spell Users Companion, and eventually the power-gamer crazy-assed supplement the Elemental Companion. I ran and played that flavor up through the late 1990’s You had to pick and choose your poison from the system- which classes actually fit, which spell lists didn’t break the game, which skills of the hundreds would actually get used. We had a good time with it over many campaigns. 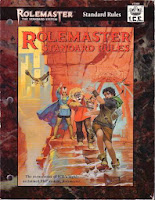 CLEANING UP
Then we switched over to Rolemaster Standard System, a retooling of the basic engine (also called RM 3e). It consolidated the rules, cleaned up the skill system, and tried to make it feel like a coherent and complete system. It still had optional bits- but the supplements offered more bolt-ons than new approaches to the rules. The switch ended up being fairly painless- except for the price of buying new books. I ran a complete multi-year campaign using it, as well as a reskin to handle Legend of the Five Rings. A couple of other people ran campaigns as well. However the change to something less slap-dash cost Rolemaster something. Before it had been f*cking insane. I mean seriously crazy with all of the bits, bobs, dials. Look at all of the stuff going on in the Rolemaster Companions I-VII plus the others and try to stitch that together. Even basic concepts- like initiative-- could have several parallel complicated and arcane rules versions. And part of the charm of the game lay in that weirdness. When they clean it up it lose some of that magic.

But more importantly, it felt like too much work for what you got out of it. Character creation and advancement became a bear. The power curve as you advanced become silly. Plus I lost some of my appetite for a combat heavy fantasy campaign. I wanted more of a balance- between the low-power fantasy I got in running GURPS 3e (the other big fantasy system I used) and this old-school power game. In the end, I packed up all of my RM stuff and handed them off to another player. They had fond memories of the games and tried it, but eventually ditched in favor of 3.5 and then Pathfinder. Rolemaster hugely influenced my gaming- showing me lots of options and forcing me to really gain system mastery in order to make the game hum. But I don’t think I’ll ever run it again. At times I have nostalgia and consider what it might be like to run from just Character Law, Spell Law, and Arms Law, but I think better of it. I have other game systems I’d requiring less effort to push uphill. These that’s that really important to me: I don’t want to fight with the game system I’m running.


CONS
First in a series on games I loved, but no longer play. You can find Part Two: Champions here and Part Three: GURPS here.
Posted by Lowell Francis at 2:49 PM