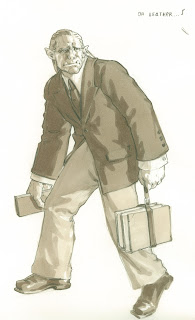 Sturgeon’s law suggests there’s 100 high quality posts hidden around here. I did a rough estimate based on sampling and came up with an average word count of about 1700. That means I’ve got roughly 1.7 million words here. Again, apply Sturgeon’s law as needed.

I began with the brilliant idea of only titling my posts by date. I ditched that after the first year. When I reread I my first few years of posting I wince. In year two I got some nice attention from RPG Geek but also had some local gamers shit over everything I’d done. It took some time to get the wind back in my sails after that. Eventually I did; I blogged some over at RPG Geek and then stopped; I got on G+ and started online gaming; I helped start Play on Target; and I began to trace the roots of various rpg genres. Things rolled on from there. I've changed the page template just once and might do it again…maybe.

But that’s looking back, I’m going to look forward. Here’s what I’m doing, trying to do, and going to be doing for the foreseeable future:

1. I’m going to finish out the Post-Apocalyptic RPG Histories soon. Then I’ll put together an overview of 2014 releases for each of the previous genres. I want to take some time to edit and reformat the existing lists and figure out a way to release them as single electronic publications. I’d like to increase my Patreon program, but I’m not sure of the best approach.

2. I’m going to hit refresh repeatedly on Friday the 31st and not be too disappointed when I don’t win an ENnie.

3. I’m going to have Right of Succession ready to go for a Kickstarter late this year or early next. We may have Gen Con booth space, so I’d better be ready.

4. Related to that I’m going to get Action Cards into a solid beta state. I want to get it out there so other people can play around with it. That means making the cards and pdf available thru DriveThru and/or Game Crafter. I’m trying to boil down the essentials of the game for the beta doc. Also I got a this new logo done by the amazing Aaron Acevedo.

5. Again related, I’m planning to go to Metatopia once more this year. I’m thinking about driving since I hate airports so much. Plus it’d be significantly cheaper. I have some slices of Action Cards to test out as well as a couple of other things.

6. I'm going to finish this comic pitch with Art Lyon for this publisher's next open submission round.

7. I want to get Play on Target back on to a regular release schedule. That might mean non-regular host episode series and/or increasing our GM Jam frequency.

8. I want to keep to a 1-2 posts per week schedule. As I mentioned in my interview with Dr. Tom the Frog (plug!), the blog’s a way for me to keep writing and generating content. It sometimes feels like it pulls away from other projects, but there’s a chunk of useful material here. I’ve dropped most of it into Scrivener- now I have to figure out how to cut, reduce and distill the best parts. Even after 1000 posts, I don’t know how to measure success so I don’t try to. Some focus on comments, but that creates worry when posts don’t spark responses. I’m afraid that a desire for argument and reaction might negatively shape my writing. OOH I want to get better at commenting on the other excellent blogs I read.

9. I'm going to do another clearing pass of books and games before the end of the year. I want to set some ground rules for myself about what stays and goes. I've seen others do it, surely it can't be that hard? 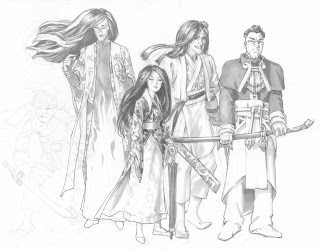 10. I’m going to do more and more varied online gaming. I’ve started work towards that. I want to plan and run an online campaign; something like my earlier Changeling Lost Vegas game. Aimed towards shorter arcs, and trying to see what I can learn from that.
I’m going to continue to be immensely grateful to Sherri Stewart the love of my life. I’m very lucky she’s the person she is. I’ll also be thankful for the amazing new gamers and new friends I’ve met online.

OK, so to round out the blogging about blogging, I give you TEN LISTS OF OTHER THINGS WHICH OCCURRED TO ME.

TEN RPGS I’VE RUN THE MOST (from high to low)


TEN MINIATURES I NEED TO PAINT NEXT
Pinterest Board here


TEN GAMES I WANT TO RUN


TEN BELOVED POSTS
10x10x10=1000. There you go. Hope you've gotten something out of the blog so far. Disagreements, refutations, and like-mindedness can be added to the comments below.

Posted by Lowell Francis at 1:48 PM