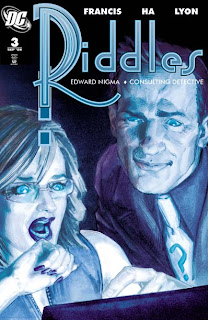 A pitch we (me, Art Lyon, and Gene Ha) did for DC several years ago. We had some interest, but the timetable they asked about was crazy (they wanted it in before the new Batman film a few months away). It doesn't work with the new status quo in the DC Universe, but I think it remains cool concept. I'd love to make it a backstory for a superhero campaign.

When old adversaries turn up, detective Edward Nigma, formerly known as The Riddler, flees Gotham City. He sets up shop in Washington, DC and builds a network of connections, assistants…and enemies.
Following the cases of a detective who schemes like Yojimbo and pontificates like Sherlock Holmes, Riddles tours unexpected corners of the DC universe and the many genres of mystery: from noir to technothriller, from conspiracy to locked-room, and everything in between. But, although Nigma excels at solving puzzles, his discoveries may be as dangerous as the crimes themselves.
But is the Riddler just a detective or something more? Stuck solving cases for the underworld he’s so recently escaped, he begins to recruit a team— but to what purpose? Through the course of the series we see the pieces fall into place as Eddie sets up a final showdown…for revenge.
Can a criminal hunt criminals without becoming one again? Will he live to find out? Will he look up from checking stats on his Fantasy Villain draft picks long enough to worry about it?
MAIN CHARACTERS
Edward Nigma: Although he tells himself he's in it for the fame and money, part of him knows that’s a lie. A clean record gives him a chance to go straight, but he needs challenges to keep from going crazy...er. To every case he brings a brilliant analytical mind, a penchant for schemes, a bizarre supporting cast - and a nearly limitless ego. His clients will not always like the answers he uncovers.
Yeager K. Allen: The FBI  liaison to the Washington, DC police who finds himself under Eddie's thumb. Years before, the Riddler supplied him with enough information to make a name for himself at the agency. He’s not corrupt, just inclined towards the easiest path. His debt to Nigma chafes, but he can’t resist access to the kind of evidence only Edward Nigma can turn up – evidence and insights carefully doled out. So, Allen helps him - but he's always on the lookout for ways to take Nigma down a peg.
The Dog: Eddie’s second recruit, a patriotic robot dog claiming to be half-beagle, half-bloodhound - meaning he’s right half the time. Another one of Prof. Ivo’s failures, he made the mistake of turning good to the Power Company and found himself a robo-mascot butler rather than a member. The Dog joins Eddie in the heart of the American capital in the hope he can do some actual good... and perhaps even get to vote.
“Manny”: A mook’s mook, Manny is the survivor of many super villain henchmen gangs. He brings with him minimal skills and an insatiable drive to be helpful to Eddie, who’s pulled his bacon out of the fire once again.
Mujinahime: The self-proclaimed Princess of the Mujina—tiny Japanese trickster demons— Mujinahime and her gang of wargrrls control their turf through a mix of skill, superpowers, and cute. While she appears innocent at first, darkness reveals her true colors—making her Eddie’s secret weapon.
The Word: A forgotten dark vigilante who was gritty before gritty was in. Now semi-retired and more smelly than fearsome, Eddie offers the Word one last chance to make a difference—but on the Riddler’s terms. 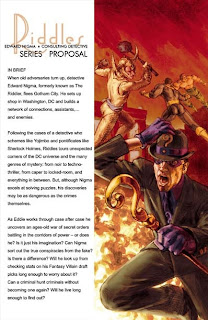 ISSUE ONE
Edward Nigma’s doing well. He’s managed to build a decent client list, establish an exotic reputation, and gain recognition through a snappy advertising campaign. Besides a few lost competitions against the Dark Knight, he considers his life pretty good. That comes crashing down when he returns to his office to find his staff touched by the grim grinning rictus of Joker Death (tm), from his secretary to his agent to his lawyer. By the time the Major Crimes Unit arrives, Eddie realizes old friends and enemies have made it too hot to stay in Gotham City.
Landing in Washington, DC Eddie sets up an office and begins his hunt for a capable assistant. The results are unfortunate and in one brief case even disastrous: kids straight out of their origins with no real training, Snapper Carr wannabes, or, worse yet, former sidekicks to villains, including Jewelee and the Body Doubles. After Harley Quinn swears revenge for Nigma's casual use of words like “underqualified,” and “psychotic”, Eddie decides to take a different tack.
Short-staffed, Nigma's first big case forces him to team up with Oracle in an effort to track down a hacker working the halls of one of the most secure facilities on the planet. She needs him to prevent Accidental Armageddon v 2.0 and he needs her to help solve a domestic dispute between two of DC's strangest villains.
To get in, Eddie twists the arm of his unwilling FBI contact, Yeager K. Allen, whose knack for ducking trouble fails him when Nigma shows up. With Oracle riding virtual shotgun, they discover that a combination of VR “entertainments,” a King Kong fetish, and the unauthorized use of government supercomputing resources may spell doom for Monsieur Mallah and the Brain's relationship, threaten the world, and scar the detectives for life-- physically and mentally.
Later, back at the office, a call from Allen may provide Nigma with the solution to his staffing and safety woes: a potential assistant who's worked with the FBI before— The Dog, an evil robot superdog now turned patriotic crimefighter. With his first recruit, Eddie begins to set in motion a brilliant, intricate revenge plot – one that could very well destroy everything he’s built.
FUTURE ISSUES
Issue 2: A Fistful of Mooks
When former henchmen call on Nigma to solve a mystery before their bosses Mr. Freeze and Scarecrow get back, Eddie has to choose between putting things right and telling the dangerous truth. Of course that's no choice if there's trouble to be caused for former rogues-gallery rivals. Nigma plays the two gangs of henchmen against one another while ferreting out the truth. As the dust settles, Eddie comes away with his next recruit, Manny—a mook among mooks.
Issue 3: City of Sins
A city of sin. A city of lies. A bloody string of unsolved murders. Eddie faces competition in the form of washed-up boy geniuses the Harvey Twins, the less-than-deadly Encyclopedist, and the hyper-professional Nan True. But Eddie’s agenda reaches beyond these mysteries as he recruits another member for his team, Mujinahime whose girl-gang of Otaku-bashers and MySpace-poets rules the streets. Is this seedy burgh of bad men, worse women, and stark lighting ready for the master of double, triple and quintuple crosses?
Issue 4: Twenty-Four in 24
The Penguin, one of Eddie's few remaining friends, calls for help. Now he has twenty-four hours (and twenty-four pages) to reunite a retired supergang to stop a heist before the bird gets caged. Will his plans collapse when they find he's been “flexible” with the truth? How much of Eddie’s plan aims to help his old friend and how much to help himself? A countdown climax answers these questions and brings Eddie another member of his team. Twenty-Four meets The Blues Brothers, minus the Illinois Nazis...maybe.
Issue 5: The Trap Trap!
Washington is caught in the crossfire when Cannon, Saber, Merlyn and other super-assassins come to town. Their target is Nigma! Can he survive when he finds his old death-traps rebuilt and used against him? His team has their hands full guarding Eddie-- but does he have other protectors? And why is he so calm? By the end Eddie reveals his plot to solve a client’s mystery, get his hands on rare super-equipment and incidentally take down a few competitors in his online Fantasy Villain league.
Issue 6: The Red Herring Gambit
The Riddler has carefully accrued debts, equipment and resources through each of his cases—and now the pieces of the puzzle come together as Eddie reveals his scheme. His carefully gathered team of odd-ball assistants must go in Mission: Impossible style. But will they be willing to when they learn Eddie’s objective: Take Down the Joker!


WHY RIDDLES?
*Lacking powers or any shtick beyond being clever, the Riddler is arguably one of Batman's most interesting foes. This series explores that character, what led to his one year coma and why he's decided to “go straight.”
*Plays with and explores popular genres of mystery today—Teen Detectives, Sin-City Noir, Technothrillers ala 24, and so on. Like Planetary, Riddles plays with the look and tropes of these stories.
*Riddles will be done as a six-issue mini-series. Each story will be told “all-in-one.” At the same time, continuity and coherence for the series comes from Eddie’s gathering of his gang and hints at a larger plan. He claims to have gone straight, but can he resist a grand diabolical scheme?
*Jumps off from elements created in Paul Dini's new run on Detective Comics, events of Infinite Crisis, and the continuing themes of 52.
Posted by Lowell Francis at 10:25 AM