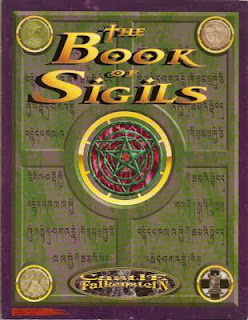 What Is It?
A sourcebook of magickal societies and magick across the whole Castle Falkenstein setting.

Introduction
As with the reviews of most of these Castle Falkenstein products, I need to assess the book on two terms. First, does it work as a CF supplement? Second, is this something which would be useful/worth reading for other gamers? On the former, I can say sincerely that The Book of Sigils is a major success. It echoes the best of the structures from previous books and provides new rules and ideas about magic. These ideas fit well with the systems of the main book. The expansion feels natural, that discussion about magic has been broadened, rather than that new mechanics and details have been added to create a salable book. On the latter point, I can attest to my own use of many of these ideas and concepts from this book in other games. There’s rich material to be mined here- especially for GMs fond of rich, consistent and interesting tapestries of magic.

The Book Itself
The Book of Sigils follows the same general layout as the rest of the books in the CF line. That’s both for good and a little ill. The good is that for the time, R Talsorian did a great job with the mid-1990’s DTP software. There’s clean layout, nice icons, and solid use of fonts (rather than going overboard). On the other hand, they use a grey-screen behind most of the pages which can make the reading less than ideal in places. I’d be curious to see how the pdf version of this would look on a mobile device. This 128 page softcover also falls into the same trap as the other CF books. Where they have a lot of information to present, they give it to you- at a much reduced font size- the section on Voudoun and Zombies is particularly egregious in this regard. That’s both an artifact of the technology of the time and editorial decisions. But it does mean the font size shifts from section to section.

The interior artwork in the book works- done for the most part by a single artist (I believe Mark Schumann, but I can’t tell from the credits or images). These are pencil sketches, in some cases oddly full-page, which fit with the book’s presentation. However the graphic images- such as the front cover, and some of the sigils inside, look really dated given modern graphics programs. They look very, very 1990’s. The book’s credited to a team of writers, including Mike Pondsmith, but it doesn’t feel like a product created by committee. The tone and presentation remains consistent throughout.

Weaving the Structure
Most Castle Falkenstein sourcebooks split into a handful of sections, with different kinds of material in each (Steam Age, Auberon's Memoirs, and Comme Il Faut split into two parts like this). The Book of Sigils is the exception which proves the rule. Like the core book and Six-Guns & Sorcery, The Book of Sigils has a strong narrative running through it- and like the game fiction from the main Castle Falkenstein book, this story works. In fact, I actually think it works better. I’ve said before I dislike most game fiction- it so often fails on both its purposes: illuminating the game world and providing a narrative I want to read more of. That narrative provides the story of a protagonist with many names, but primarily as known as Anthony Savile. His story of involvement with many magickal orders takes him across the globe. The division of sections is primarily geographic, as his tale moves from country to country, continent to continent. It is presented as a memoir, a device which again reinforces the central conceit of CF which has the PCs writing their own heroic memoirs.

The Story
I don’t want to give too much away about the story running through this book. Suffice to say, we get an on-the-ground perspective on the Magickal Orders, the life of magicians, the interactions of wizards among themselves and how they fit into the larger world. The first fifty pages tour New Europa, hitting many of the major locations. This connects up neatly with the material from the core book which focused on European mages and chantries. There’s great material on the necessary rituals for mages- including discovery, recruitment, and how they function as a kind of gentlemen's club. For GMs running campaigns with magic-using characters, these kinds of details will be invaluable, offering new kinds of plots and details to throw in for verisimilitude. Some sections of Europe don’t get individual treatment (I would have like to have seen something on the Russians) but overall there’s enough material to fuel many campaigns.

The following sections move the action further afield. We begin with Africa and the Middle East and then cross the ocean. Over fifty pages, Savile crosses the New World from Boston to Canada to the Indian Nations to New Orleans to South America to the California Free State. Some of this fits nicely in with the later Six-Guns & Sorcery- though it also has to take a detour to reference Wild, Wild West as well. The authors set up a nice contrast between the Chantry and Brotherhood structures of Europe and those of these regions. Each of them feels right- doing a remarkable job of avoiding too much goofiness. At the same time, each feels interesting within the context of the game. Dealing with the other, with marginal groups in historical games can be tricky. Following too much the sentiment of the period feels offensive, but going too much the other direction makes these groups overly powerful or cool. There’s the risk of liberal guilt payback (which I say as a liberal). The Book of Sigils strikes a great balance- with the non-western magical societies offered appearing just as interesting and just as problematic as those of the west. The last part of the book hits the Pacific Islands, China (quite nicely) and India before wrapping up the story in a way which feels right and yet leaves me wanting to know more.

The Game Material
Most of the material presented is narrative- either the first person narration of Savile’s story or discussion of setting elements. But the book also offers solid new rules and systems. Probably the most important for a GM will be the detailing of thirty new Magickal Orders across the globe. Most of these figure into Savile’s tale. As with the presentation of Orders in the main book, each offers a discussion of philosophy and structure, followed by a number of spells unique to the group. These are usually tied to a pair of grimoires. Spell effects don’t dwell on the minutiae- instead they simply present what it does, leaving the interpretation to the GM ( "...imbues the caster with the strength of a herd of buffalo," or "...allows the minute perception of the condition of a body.") The book illuminates the hows and whys of Orders, and presents mechanics for creating your own. In addition, the book lays out and examines some of the basic concepts of magic, clarifying some of the cosmology of the New Europa setting.

Topics of note covered in the book include Women’s Sorcerous Orders; hospitality and rules; making a living as a wizard; philosophical debates; order oppositions; gaining membership and so on. Book of Sigils also touches on a number of other important mechanics: learning from spell failure; sympathetic magick; spirit combat; handling the undead; magickal potions; custom spells; wizard duels, and so on. In short, there’s something for everyone- a useful book for player and GM alike.

Overall
For Castle Falkenstein gamers, this ought to be a must-buy. This would be my third suggested purchase, after the core book and Comme Il Faut.

For anyone else, that's another question. Here’s the thing...Book of Sigils offers serious exploration of the magickal side of the Castle Falkenstein world. That makes a good deal of it apparently setting specific. However, I’ve found it useful on several counts. I brought the ideas of the Sorcerous orders, especially in tone and approach, over to my own fantasy steampunk game. My players found that structure particularly useful in getting a handle the world of magic. In many cases I tied them to sympathetic clubs, which provided a ready set of alliances and battles. Book of Sigils offers a neat and portable concept. But it also presents a broader lesson- an excellent look at a functioning magical society from the inside. For GMs world-building with magic, BoS serves as a great touchstone. I've reread this a couple of times when I've been thinking about how to make issues of magic more vivid and interesting to my players. (There's a reason CF's so high on my list of evocative magic systems).

Portability
As I said above, I think the general ideas of BoS can be transformed and used elsewhere. On the flip side, BoS doesn’t add a lot of complexity to the Castle Falkenstein system. If you wanted to use CF for another game, these mechanics could easily be brought over. If you’re doing CF with another system, BoS doesn’t add any major barriers.
Posted by Lowell Francis at 10:24 AM