Fifteenth is the Dice Anniversary

I met my wife through being bad at Magic the Gathering. Well, that and Games Workshop's Man O' War. See at that point I was managing a game store and running the evening game room. On Wednesdays we got people together for Magic- this would have been around the time of Legends, The Dark and Fallen Empires. I was not great at MtG- frankly I'm not great at board or CCG games, but I enjoy playing. But I could win sometimes- the trick was that I often wouldn't, even if I could. When people won, they were happy- and often that meant they'd buy more snacks and cards. I didn't have to throw a game often- I was a fairly average player- but every once in a while my opponents would have their deck go against them.

So one night while playing- with a Shivan Dragon up for ante- I let an attack go through even though I could have stopped it with the "Fog" card in my hand. I had a couple of people behind me see the terrible play- which earned me a reputation as an even worse player than I was. So the first thing my future wife, Sherri, heard about me was that I was that guy who didn't know how to play Magic but ran a game room. Sherri had fallen in with a group at college who'd gotten pretty heavily into MtG. It appealed to her sense of organization and combinations- she liked getting things in order. A couple of people in that group came over when I started pushing Man O' War hard- one of those games I loved and wanted to get more people into. I ended up playing on the same side as Sherri. We crushed a Dark Elf Black Ark of Nagarroth through the power of outclassed sexy demons- one of my favorite turnarounds at the table. After that Sherri came by regularly on Wednesdays to paint figures- ships and others- with some of her friends. We started talking and eventually I managed to lure her into a fantasy GURPS game I was about to start.

That pretty much sealed the deal. See- I'm not handsome, I'm not suave, I'm not outgoing, but I can tell a pretty compelling story. And Sherri loves stories.

We got married fifteen years ago today, on a Monday evening. We'd chosen that date to make it more difficult for the parents to set up anything fancy. Despite our efforts, they managed to put on a pretty impressive wedding. We had a lovely civil ceremony, overseen by an old friend of the family and local judge. We had a table of gamers, many with mullets. We had a superb reception- with excellent service because no one else was getting married on a Monday night, so we had their full attention.

I'm writing this a little while after having finished up a session of Changeling the Lost where her character had to clamber across grease-coated rafters to rescue a potential enemy from falling into a vat of boiling grue. Somehow, she's still willing to be married to me. She's agreed to a one-on-one campaign as her anniversary present. Sherri enjoys the various role-playing campaigns, and I've enjoyed every one of her characters. Sometimes she suffers more than the other players because she's my wife. I know some people think she gets all the behind the scenes details but she doesn't. She's still my favorite audience, my favorite player and someone I never get tired of spending time with.

I look forward to all the stories to come. 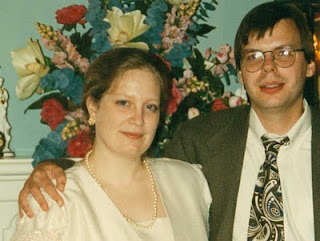 To the left, a terrible picture of me from the wedding, and a lovely picture of her.
Posted by Lowell Francis at 12:29 AM

Email ThisBlogThis!Share to TwitterShare to FacebookShare to Pinterest
Labels: nostalgia