Dreamreading the Dictionary of Mu 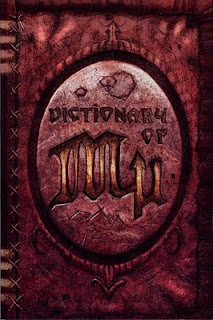 Finding the Dictionary
So I’d read about Dictionary of Mu, an rpg described as a pulp fantasy. I’d asked around on the Geek to see if anyone had played or read it and might provide a review. However, I got no takers even when I offered a bounty. So when my friend Steve headed down to Gen Con this year, I asked him to track down a copy for me.

Here’s what I knew about the game. I knew that it was a pulp fantasy game, set in our world. It could be handled more as a classical pulp campaign (ala Adventure!or Spirit of the Century) or as a kind of noir game taking place in the 1950’s (so something more like The Edge of Midnight). The characters would take on the role of investigators of the strange, more like archeologists of the arcane than your classic warriors against the darkness. For the Noir-style campaign, the characters would be more forced into the strangeness by accident.

Knowing the Dictionary
The central conceit of the game is the Dictionary of Mu, a mythic volume which is simultaneously the true history of the world, a great and elaborate lie, an analysis of a lost world, the occult blueprints to the universe, an infectious memetic fiction, and a joke. It clearly takes influences from modern meta-fictional works, but attaches theme to a more visceral and two-fisted set of tropes. So it is Invisible Cities, History of the Siege of Lisbon, The Dictionary of Khazars, and all of Borges meets Robert E. Howard or Raymond Chandler.

Diverse groups seek out scraps and bits of the Dictionary, it having been torn and scattered across the world. The how and why of that remains a question to work in play. That’s an important detail- in the game, the players decipher the Dictionary, in parts, but also reshape it, consciously and unconsciously. The various bits of the Dictionary have gotten changed over the years- taking other forms which have to be figured out (so there’s a little debt to The DaVinci Code there). May groups- from mad scientists, to agents of the crown, to secret Oriental societies seek out the pieces to try to put together the best and most valid version of the Dictionary. Multiple versions exist- some serving as doorstops for some twisted realities. The players end up caught in the middle of those wars, at the same time their own agendas set them to finding the pieces.

The Dictionary’s entries come in several forms. Some exists as copied and recopied text from the original document- while transformed, they possess their own power. However in the copying and over time, other ideas and sources have crept into these pieces. In game terms, these function as a kind of grimoire- offering powers and spells derived from the secrets of Mu. The purer and less muddled by noise the text, the more potent and potentially more dangerous the lore offered. Some entries exist as palimpsests- where an earlier artifact or shard containing a metaphysical portion of the entry has been removed and deliberately reworked for another purpose. These items may be useful and strange magical items, but will require significant research and reconstruction to be able to get at the secrets beneath the new use. Finally, entries may be more tangible, tied up in artifacts which contain something of the actual language of the Dictionary. These "Entry Doorways" offer groups and players the most interesting options.

The nature of the Dictionary of Mu means that it offers ideas outside of time and space. With the right knowledge and skill, characters can gain insight, interact with the ideas or even draw out a reading which affects the real world. The first approach reminds me a little of the Armitage Files- in that the GM can offer the players a literal text, such as a diary, collage, or letter describing events. These may refer to the future, in which case the players can investigate and deal with problems ahead of time. On the other hand, they may be perspectives or commentaries from non-existent or fictional persons on events or mysteries they’ve encountered. This allows the give to perhaps offer the players new clues or insights into game plots.

The second form of interaction actually shifts the stage significantly- players enter into a portion of the "root" story which takes place in a version of Mu. What Mu actually looks like depends on the GM’s focus, the players’ expectations, and details from the environment. It might look like a Greco-Roman version of Atlantis on one trip or more like a scene from a Paradise Lost etching on another. The characters take on other roles in this setting- a game within a game. This can be a scene, a full adventure, or even part of an ongoing adventure in this world. This last is most interesting since such a story might be told out of sequence. The game provides mechanics for handling the dual character natures fairly easily. Some games, such as Nephilim have a like mechanic for multiple life stories. But even more the ideas seem to echo those of Heroquesting from RQ’s Glorantha. The intent is that these stories have an impact- learned powers, new information about present events or event telling the real behind the scenes story of what happened to Mu.

The GM can also reverse this approach. Instead of the characters being transported back into the contradictory, historical semi-fiction that is the idea of Mu, those concepts escape into the present world when the item is examined. Suddenly those metaphorical stories and ideas reshape the world, making people actors in new dramas. If the players have opened the Pandora’s Box that caused this, they may be forced to figure out what their roles are to be- how to bring the story to an end. On the other hand, stumbling on one of these places acting out such a stories makes for a great scenario (especially if the PCs have friends caught up in that). As with travels back into the world of Mu- how they change, shape and decide those stories actually shifts things. It ends up manipulating the history, purpose and thematic of Mu- players (and others) can change the course of a great supernatural river running just below the surface of the world. In some ways, it echoes the idea of sites and nexus points from Feng Shui.

Reading the Dictionary
I was very excited about this game- I’d started to think about what a campaign might look like. The week after GenCon, Steve handed me my copy of the rules.

Which is completely different from anything I described here. I think Game Cryer’s review of it describes it best:

The Dictionary of Mu is a setting book for the Sorceror RPG. Written by Judd Karlman, Mu tells the story of Marr’d and its inhabitants through a series of dictionary entries penned by the insane Oghma, son of Oghma. The entries highlight places, people and concepts characters might encounter on their travels through the red deserts of Marr’d...Combine Conan the Barbarian with John Carpenter’s Ghosts of Mars and you get a sense of the flavor of Mu...On the dying planet of Marr’d, the people slave and perish amid the red sands. Things dead and forgotten are sources of power, and those who dare to summon such spirits often are themselves transformed and consumed, lost to barbarism in a world of cruelty and survival, hope and tragedy.


That’s cool...but seriously where the hell did my idea of the game come from? I was really and seriously convinced that this was the game’s premise. Was there another game that was more like this? I must have read the game blurb at some point, "The Dictionary of Mu is a pulp fantasy setting supplement for Ron Edwards' Sorcerer RPG where demons are dead things, bits of history made wrong. Players will decide the fate of the planet through play, adding to the dictionary as they go and creating a deeper and richer history with every demonic summoning." From there I imagined what the game would have to be like.

Unless it used to be like that and the world changed, and I’m the only one who remembers it.
Posted by Lowell Francis at 10:11 PM