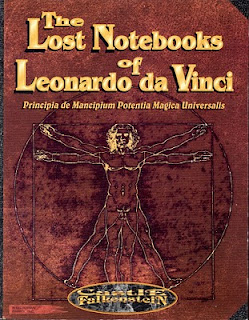 WHAT IS IT?
The sourcebook for Sorcerous Automata in the Castle Falkenstein universe. Sort of.

IF YOU RECOMMEND SOMETHING, SHOULDN'T IT BE GOOD?
As might be guessed from my series of reviews for Castle Falkenstein products, I have a fondness for steampunk and Victoriana. But as that particular craze has taken off, we’ve gotten more stuff which has in turn meant more crap. For example, in a number sourcebooks and on sites, I was directed to Murdoch Mysteries, a TV series (based on books) about an inventor-detective in Victorian Toronto. I love police procedural shows, especially British ones so I went for it. However those who suggested the show neglected a basic point: the show sucks. Maybe it gets better after the first season, but it squandered all of my good will with terrible acting, idiotic plots, spastic camerawork, and clumsy anachronisms (which I can usually tolerate).

The Lost Notebooks of Leonardo da Vinci, likewise, uses up some of my goodwill towards the Castle Falkenstein line as a whole. I’m really torn- and want to find some things I like here, but the book makes that difficult. Allow me to say this up front: LNoLdV is the least essential of all the Castle Falkenstein supplements for several reasons.

THE BOOK ITSELF
Physically it is a 128 page softcover, perfect bound. The artwork’s quite good throughout- sketches echoing da Vinci’s style throughout provided by James Higgins. But the book’s printed on a sepia tone paper, which means a greytone background for the pdf version. The color choice makes the volume more difficult to read. Add to that the font choice. The majority of the book’s presented as Leonardo’s own handwriting, which means a 'script-style' font for those sections. That font’s annoying and hard to read- especially when italicized. I understand the stylistic choice, but I think usability trumps that. In caps, for example, the "I" looks like a "J" which bugs me more than it ought to.

HEY DAWG, I HEARD YOU LIKE FLUFF
Magickal Engines or Sorcerous Automata are a detail from the story told in the original Castle Falkenstein book. Essentially, they’re a rare new development which allows the Good Guys to fight off the Bad Guys with new technology. In a world which has faeries, sorcery and steam-tech, Magickal Engines combine the latter two. That’s a significant thing- allowing magic effects without a wizard. The main book treats those tangentially- implying they’re a special thing, which makes this book a little odd. How and why this ought to fit into a campaign feels contradictory to the premise of rarity established in the core book. More problematic is a case of what Blake Snyder calls "Double Mumbo-Jumbo" where a fantastic premise gets stretched past the breaking point by the addition of more fantastic stuff. So in this case, we have a Steampunk Fantasy Victorian Universe. That should be enough to explore and provide ideas for. But here we have a book which is mostly (105 of 128) pages about the distant history of that place and Leonardo’s world. Yes, it might be interesting in places- but it feels like a wasted opportunity. Little of what’s presented here actually helps with a Castle Falkenstein campaign.

As I said, the first 105 pages are those notebooks, in Leonardo’s voice. Where the fiction in the other CF books engages me and offers me ideas and insights into actually playing in this setting, this does not. There are some interesting ideas about magick, its role and its cosmology here- but not enough to make the section interesting. There are no game mechanics and very little useable source material presented in first 80% of the book, unless you’re running a very particular campaign. It does beg the question: who is this written for? Players or GMs? I’m not sure.

DID YOU WANT SOME USEFUL MATERIAL?
Finally at page 110 we actually get how these ideas might be applied to a campaign. I feel a little odd harping on this, as I’m not someone who worries about mechanics, stats or numbers. But I do like to know how these things fit into a campaign, I like to have a relative scale of power and cost. I don’t need everything calculated down to the last point or bolt. Of the eighteen final pages of the book, four pages cover the context of these Automata- how they work in "real life," the difficulties involved, how they function compared to the other systems in the campaign, and how one actually aims and operates these devices. That’s solid and well-written material, providing some nice ideas on how to present these devices in play.

The next four pages discuss how players can actually make these Magickal Engines- beginning with getting plans for one of them which ought to be an adventure or campaign arc unto itself. Assuming they do so, players can purchase the new skill in Sorcerous Engineering. As with other construction rules from the main book, LNoLdV offers a number of variables the players can muck with (size, power source, reliability, etc). Based on those parameters players can build and modify machines from those plans. The book makes clear this is a process, involving several stages- which, of course, means that it could be interrupted by bad guys, making for some cool scenes. Nine pages following this section go through the various engines described by Leonardo in the first part of the book, providing a paragraph or two of explanation, plus the two mechanical details (Operation and Investment). So the first hundred+ pages of narrative get boiled down to nine pages of useful discussion. The last two pages of the book provide a discussion of a new and rare magickal material, Star Iron, including how to find it and its effects. I like this and I would have enjoyed seeing more of these kinds of things- interesting McGuffins which could lead to adventures.

OVERALL
This book is for series collectors, people who like pseudo-historical fiction, and those fascinated by the ideas of Magickal Engines presented in the main CF book. But the latter user will find only a small portion of the book actually offers great campaign material. This isn’t a bad book, but it is one that heads off in directions I’m not interested in. Other GM’s may find more to like here, but I recommend they do that after they’ve exhausted the rest of the CF library.

PORTABILITY
The mechanics for Magickal Engines are light- taking up four pages really. Those ideas could easily be ported elsewhere. But again, that’s only 20% of this book. The one place I can imagine this having great utility might be as a sourcebook for a Renaissance campaign, something like Mage: The Sorcerers Crusade where the notebooks would be talking about the present or close to the present.
Posted by Lowell Francis at 7:54 AM