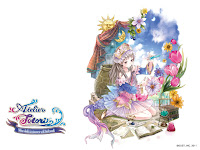 OVERVIEW
Here's some final thoughts on the alchemy campaign I built over the last couple of weeks. I finished up the work and ran almost ten hours of it for my wife. I spotted a few overlooked areas and technical problems which we corrected on the fly. Afterwards I sat down and added most of that to the campaign outline. You can find the full pdf document here, if you’re interested- it offers the basic mechanics using the Strands of FATE system. Character and shop sheets can be found here. It could easily be adapted over to another FATE campaign. Or if there are more fans of Atelier style games, they could thumb through this. More usefully, it offers some ideas for running a one-on-one shop-based campaign. Some people really enjoy building games and perhaps some of the pieces from this could be used elsewhere. You can find my earlier discussion on this here and here.

Between my last post on the campaign idea and this one I worked my way through the list of things to do. Most important was to get the character creation stuff done. Sherri was chomping at the bit. I put together character sheets for her PC and for the shop. Then I created the list of advantages. I decided to focus these on things she would likely want, rather than creating a fully-rounded set. I would create specialty abilities for the Party NPCs as needed- rather than sticking to these. I also decided to split advantages into two types- Skill Advantages, which essentially work like skills in other games and Standard Advantages. You can see the full list in the document I linked to. Then I figured out how many points she would have to distribute. Below is the character she came up with:

Mathilde Compos
Aspects: "Sees Things for What They Could Be"; "Compos By Name, Mathilde By Method"; Motto: "Choose, Improve"; She Graciously Will Allow You to Carry Her Books; "Never, Ever Let the Nickname Stick"

Mental
Craft 3
Knowledge 4 (Things Are What They Are)
Reasoning 3
Willpower 3 (You Can Only Control Yourself)
Social
Deception 1
Empathy 2 (What People Like About Themselves)
Persuasion 1
Resources 1
Physical
Agility 1
Endurance 2
Perception 3 (Glasses- Cute With; Blind Without)
Strength 1

As you can see- Strands of FATE uses a slightly different approach to attributes/characteristics than other FATE systems. That actually made it easier for me to get a handle on it when I first read the rules.

The other task was to figure out if I would have any other neat stuff to pick from for the Shop. I decided against it- I didn’t want to build a list of advantages and options ahead of time. Instead, I would offer those later in play- requiring Sherri to spend resources or development points to buy special things for the shop. She’d also be limited by space available. I did allow her to pick one general and two specialty aspects for the shop. She decided on the following:

DESIGN GOALS
If you want a better game, keep clearly in mind campaign you want to play while building the rules. In my case, beyond emulating a particular kind of video game I had several other factors to consider. I could afford to have a significant amount of bookkeeping and put that tracking in the hands of the player. In fact, that particular player enjoyed that kind of challenge and working through fiddly details represented a value challenge. I also know I want the campaign to be long-term and scalable. The early sessions should be hard- with difficult challenges and tight constraints on resources. But the game should also be able to offer those challenges later on, after the player’s gotten established and settled. To that end, several factors remain open to be decided later: the monthly debt pool, the costs of upgrades (and what they are), what later recipes look like, the difficulty of dungeon survival rolls. The many open options and systems mean I can tailor the experience as the game progresses.

At least the first session of play ended up being pretty tight. She tried out the various action and worked to get a sense of how much time she would need to keep the shop going. I threw in a couple of difficult choices along the way. As I hoped, she ended up with almost no resources unspent at the end of the session. Eventually, her skills and resources will improve- allowing her to make more adventurous choices, but I wanted the first session to have some real pressure. I will post the full session write up tomorrow. 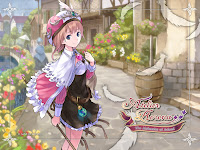 RULES ADDITIONS
1. Ingredients in the game have a rank, a suit and a factor. Those factors can be negative or positive. To assemble this I put wrote up a large list of ingredients and of factors. Then I randomized to organize that into suits, ranks and associated factors. That worked pretty well. However, if I were to do this again, I’d do some more tinkering to make the list feel a little more natural- that simpler ingredients have a lower rank. I’d also make sure some of the real useful positive factors would appear higher up in the ranking. The other change I made to alchemy was to add "Required Ingredients" to some of the recipes. That will allow me to customize special ones- especially quest recipes.

2. I put together the NPCs she’ll add to her group over time. These would be Party NPCs- who could go along in the field and adventure with her; Staff NPCs who could carry out weekly tasks; and Specialist NPCs who would offer bonuses and carry out special actions. These last two would be based on the stores Staff and Contacts scores respectively. In some cases, an NPC can be slotted into more than one of these areas. This means the player will have to make some choices. She has, for example, eight characters who can be Party members, but only five slots.

3. Each NPC begins with a set of aspects- with both she and I can invoke those in play. They also have five traits- negative personality quirks- rated from -5 to -1. These traits can be improved over time (through actions or spending NPC points). This tries to simulate the NPCs each having their own story arc and set of problems which need to be solved in the course of the campaign. I also decided that NPCs would each have a set of Special Bonuses, Ranked from One to Five. For example, the Rank One ability for the staff member Jessika is that she can sell one good for two assets (instead of one). Tamarack Tinder’s Rank One ability is that he adds +1 to the Armor Rating of his fellow party members. In order to buy new abilities, the player has improve the NPC’s negative traits.

4. I found the experience system hard to develop. I didn’t want improvement to be that sudden. I think the costs work pretty well- judging by her purchases at the end of the session. I will probably put some limits on advantage buying or raise those costs as the campaign progresses. I used a slightly different point scale from Strands of FATE (about half) because the numbers get weird later when they’re scaled that high.

LAST THOUGHTS
I’m really pleased with this exercise. The game has played out better than I hoped at the table. There’s some significant GM downtime as the player calculates the possible combinations of ingredients, so I have to be ready for that. The play feels balanced and some of the interactions have been fun. It certainly isn’t a game for everyone- probably for only one person. She still doesn’t like the FATE dice, decrying them as cruel taskmasters- but I’m liking the FATE system.
Posted by Lowell Francis at 12:35 PM