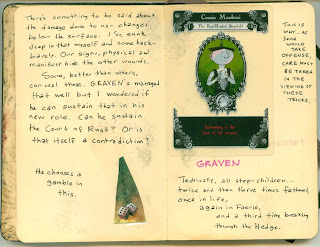 Following on my post from yesterday, CtL: Why You Should Never Look Behind the Campaign Curtain, here's the other half of my campaign prep brainstorming:

Themes and Other Elements to Consider

Dreams, the Dreamscape,and other bits. Think about what will serve as the dream images, repeated figures, or fixtures. Dream bastions, landmarks, maps of the human or Changeling soul. Some of this comes from the character’s own hopes and fears. Some of it comes from flashes of memory of the character’s durance. So several stages of the PC’s life: pre-life, taking, transformation, service, and escape from the Hedge. Shared links and images.

The Hedge and the possibilities of the other places: sterility. Zones in which the driving force of the True Faerie Overlord has been removed. There could/should be an indicator, but needs to be set up clearly so that when they see one of these realms still possesses life, they know there’s some bad shit going on.

I do like the idea of a certain amount of divine conflict- figures fighting over something. Perhaps a McGuffin device from the past. Powerful, legendarily tied to the faerie, but with other ramifications. If I hadn’t already used the Celtic stuff in the Mage game, I’d do something like the Cauldron. Perhaps from some other mythic tradition- Scandinavian, Polish, or Italian? Ideas worth exploring there.

What else to add into the mix here? Elements- Wards marking time. The calling of the Hours: Matins, Lauds, Prime, Terce, Sext, None, Vespers, Compline, Terminus (or Liminal). The last out of sequence representing the in-between state.

Other supernatural threats: Ghosts here should have some distinctive features. Basic ghosts and spirits have some requirements and reason for remaining. However there should be some special trait or characteristic that separates out the “Angry Spirits” from the standard ghosts. I think human magic…operating under a more classic paradigm (rather than the Postmodern magic of Unknown Armies) would be a useful approach. Provided that I don’t end up looking too much like Buffy or Angel’s approach.

Perhaps as an opponent or threat we might work with TED Klien, Manley Wade Wellman, and other Americana corrupted. Maybe not entirely Lovecraftian, but a significant threat. Parallel with the stupidity of the Urban Satanists. These guys might be scarier and possibly tied to the Sheriff. Two theme/images that might work here. MacDowell’s Blackwater stuff and my idea of a prison camp for the Innsmouth refugees. I like the idea of that land being a park in the south. But not big because of the toxix, old army base dump. A particular ethnic line that ended up having some wed into the population.

Characters originally taken from Wayward (campaign city) in a relatively close/short time period. This was a sacrifice and/or evidence of the barriers protecting the Freehold breaking down. PCs rescued or at least escaped and were helped at the last moment by the Dues ex Machine NPC (DxM). He brought them through and bound them with a vow in their desperation. PC’s kept on ice for some time- the vow creating a bond of fellowship. (We’ll come back to his reasons for that after some time).

The PC’s awaken from a magical slumber. The DxM Changeling has been murdered. Why he was and why he rescued the PCs remains unclear- though the process was evidently destructive to his clarity. The group discovers the DxM’s notes, gains new basic identities, and eventually discovers that the DxM has arranged their entry to the local Marlowe Academy. Now they can choose to take this up if they wish- but it will present a generally useful place. Give them the freedom to pick. Need to decide initial site of entry/hiding. Makes a difference in terms of the murder, how group hidden, their reaction ot the place. In any case, the old, unused dormitory/gardening building is theirs for living in.

The DxM is rebelling against either general corruption or a specific situation. This means his role in helping establish the Bad Thing which is happening in the Freehold. There’s a combination of corruption, exploitation, and bury-my-head-in-the-sand reaction. They city itself is somehow warded. Markers of this- perhaps eight plus one or 13 (twelve hours plus one). What are the daily prayers. In any case we have a city divided into two halves, with two courts. Each one run by a leader, younger. They’re closely tied enough to be considered siblings but publicly seen as rivals. There is also an “in-between” person.

Standard, quiet policy is to run off Changelings who wander in through the material boundaries- since supposedly they can’t get in otherwise- a quiet secret. Mani of the Changelings here willing to trade freedom for security. The Wolf figure- high noon- in charge of enforcing that. There three leaders are caught up in an inverted Lear situation. Their “father/patron” the retiring/retired kingmaker of the Freehold. He and his crew setup the current defenses of the Freehold (including the DxM). But the others have died, lost clarity, or retired.

In the meantime, the city still has to deal with supernaturals of other kinds- for which these wards offer no protection. Those remain tools of the Others to manipulate. Plus they’ve got a Changed One chained/bound to one of the closest hedge bits.

Marlowe Academy
Need to define: Ages and tone; population and size; staff; general layout; relation to town; secrets; and fit with the campaign.

A great deal of their interaction will depend on what/how the ‘Headmaster’ or ‘Principal’ appears. Could be singular figure- not exactly sinister but distant. Another option is to approach it more as a Prisoner-esque thing. The Headmaster changes every few weeks. Have to make sure doesn’t end up seeming like the stuff from Buffy.

The Prisoner idea, while appealing, implies very different interactions. It suggests a behind the scenes secret master, for one. It does make it harder to build a connection (antipathy or otherwise) for that NPC. I think I have to stick with a more classic depiction, unless we have the headmaster and the secretary- the person who carries out the headmaster’s orders.

Random Quick Plot/Scenario ideas
Notes on Notebook
If I'm going to use that as a device, I need to handle it well. What could be done there? Other options, clippings in a folder? No. Too much? I like the idea of collaging it a little- stamps, stickers, clippings, etc--> need to see if I can find anything useful in the attic to make this work.

Generally the DxM character's Notebook- Charlotte will be the name, since with an nice ambiguity and spider reference- ought to hint at several characters the players will encounter. using code names. PCs will then have something to hunt down later. Also should be 3-5 outstanding problems. These would be addressable issues within the campaign arc. Should also lay out in scattershot terms why Charlotte went and pulled them out of the Hedge (against his own strong sense of self-preservation). Some story of his travails. He also bound them with a vow they won't remember at the start of the game. "Am I one of them?"--> increasing deterioration should be reflected. His actions breaking down his clarity.

Begins with a run down of the major players and people- code names to be established. Should set the stage. Then I need to lay out a little bit about the setting- basics. What is wayward- then a tale, establishing that he began a hunt to find them. Preparations made to track them, but other forces at work. The need to have someone protect the city and the people from the awfulness coming. Bonding them in brotherhood- for their own protection and that of others.

(At this point I switched over to other prep tasks: NPCs and Notebook. I felt I had enough here to start running the game. I also did a first session outline, just because there was a lot to cover).

Next Post The Courts and Rulers of Wayward
Posted by Lowell Francis at 2:08 PM